From Editor Robert Parry: As a new thank-you gift for donations over $100 to Consortiumnews.com, we are offering a wonderful new book, The Killing Game, a selection of investigative news stories by the late Gary Webb explaining the context of his remarkable life and tragic death.

Perhaps more than any journalist, Webb was a victim of what has happened inside American journalism over the past few decades as the national press corps increasingly has bowed down to the powerful and made itself a willing servant to official propaganda. 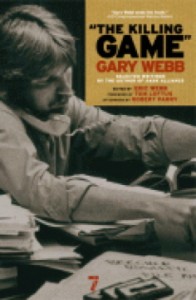 In 1996, Webb encountered this dark new reality when he revived the scandal of Nicaraguan Contra cocaine trafficking, a story that Official Washington and the Big Newspapers had rejected in the 1980s as a “conspiracy theory” despite hard evidence to the contrary.

In response to Webb’s investigative series at the San Jose Mercury-News, the influential right-wing news media along with the New York Times, the Washington Post and the Los Angeles Times transformed Webb into a laughingstock. Webb’s Mercury-News editors soon panicked and forced Webb to resign.

Yet, instead of finally admitting the documented truth and rehabilitating Webb’s career, the major newspapers continued to ignore or downplay the CIA’s own admissions. Webb found himself permanently cast out of mainstream journalism and unable to make a living.

Having also seen his marriage break up and having to move from a small rental where he lived outside Sacramento, California, Webb on the night of Dec. 9, 2004, wrote notes to his family, laid out a certificate for his cremation and used his father’s pistol to shoot himself in the head.

Even after his death at the age of 49, the major newspapers continued to heap contempt on Webb in his obituaries. Apparently, it was easier to maintain the conventional wisdom than to admit their own failures and set the record straight.

In the 1980s, I had co-written along with my Associated Press colleague Brian Barger the initial Contra-cocaine stories, which the Big Newspapers pooh-poohed back then. Thus, in the 1990s, Consortiumnews.com was one of the few outlets that explained Webb’s important contributions to truth-telling about this scandal.

So, with a donation of $100 or more, you can not only get a copy of this important book but you can help sustain the work of Consortiumnews.com, which has since its founding in 1995 stood up for the true principles of journalism. (Since we are a 501-c-3 non-profit, your donation may be tax-deductible.)

If you can’t afford $100, we also are offering as a premium gift for donations of $75 or more an autographed copy of one of my last three books: Lost History, Secrecy & Privilege or Neck Deep.

For donations of $60 or more, you can get a DVD of the 1991 PBS “Frontline” documentary “The Election Held Hostage,” which I co-wrote. It explores Republican skullduggery with Iran prior to the pivotal 1980 election.

You can make a donation by credit card at the Web site or by check to Consortium for Independent Journalism (CIJ); 2200 Wilson Blvd.; Suite 102-231; Arlington VA 22201. Or you can use PayPal (our account is named after our e-mail address “consortnew@aol.com”).

Once you make your donation, and if you want one of the premium gifts  simply e-mail us your selection at consortnew@aol.com. We appreciate donations of any size that you feel you can afford as we try to raise $45,000 by year’s end. You also may want your entire donation to go simply to support our journalistic work.

Here are some other ways you can help us continue our work:

–If you’d rather spread out your support in smaller amounts, you can sign up for a monthly donation. With contributions of $10 or more a month, you can qualify for war correspondent Don North’s DVD, “Yesterday’s Enemies” about the lives of former Salvadoran guerrillas. For details, click here. (If you sign up for a monthly donation and want to get Don’s DVD, remember to contact us at consortnew@aol.com.)

–If you can’t afford a donation right now, you can also help us reach our fundraising goal by taking advantage of our deep discount for the three-book set of Robert Parry’s Lost History, Secrecy & Privilege and Neck Deep (co-authored with Sam and Nat Parry). The sale price for the set is only $29, postage included. For details, click here.

—You can help us close out some warehouse space by buying full boxes of Secrecy & Privilege or Neck Deep for only $56. Each carton contains 28 paperbacks, or you can ask that we give you a mix of half and half, 14 of each. At $56 for a carton, each book only costs you $2. And for U.S. orders, we’ll pay for shipping, too.

You can give the books away as holiday gifts or resell them for your own fundraiser. (Mostly, we need to get the books out of the warehouse, so we don’t have to destroy them.) For details about this bulk book order, click here.