As the United States has de-industrialized over the past several decades, an illusion of prosperity was maintained by rampant consumerism fueled by easy credit and bubble economies. Now U.S. businesses are hoping for another fix from shoppers rushing to the malls, as Danny Schechter writes.

“Black Friday” is “black” because it is the day when retail businesses supposedly go into the black. This may not have been such a wise use of language since the Wall Street crash of 1929, ushering in the Great Depression, started on a “Black Thursday.”

Throughout America, an advertising-dominated media is plugging all the “bargains” while shoppers, hungry to save a few bucks, in a country where more than half of our families are barely making it, are off to the malls in an annual ritual that each year barely saves the retail outlets but adds costly bills to already squeezed and debt-dependent consumers. 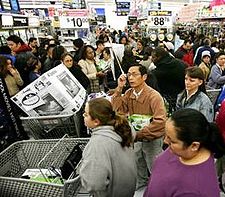 The easy availability of credit has created what Robert Manning calls our Credit Card Nation, where we are encouraged to shop until we drop.

In the aftermath of the terror attacks of Sept. 11, 2001, recall that President George W. Bush made that point shamelessly when he told the American people that the best way to help in that traumatic period was to go shopping again. He knew, even if most Americans didn’t, that it is their non-stop consumption that drives the economy. Without it, I guess, the terrorists could have won.

“In fact,” Manning writes in his seminal book on credit cards, “with the ascendance of the post-industrial economy, bank credit cards have become an essential technological and financial tool for commercial transactions as well as an increasingly important macro-economic tool for U.S. policy-makers.”

That is why this year, lobbyists for the retail shopping industry are begging the Federal Reserve Bank to further cut the costs of debit cards imposed by avaricious banks. To have more impact, stores should be supporting the Occupy movement that’s also protesting bankster greed.

Shopping may be our real national pastime, but it comes, as Manning warns, at a price that is not advertised in the malls.

“The idyllic wonderland of consumer credit too often belies a reality of unknown sacrifices and enduring debt. … The credit card industry is playing a crucial role in transforming American consumer attitudes.

“The promotion of ‘immediate gratification’ ruptures the cognitive connection between earnings/saving and credit/debt that has traditionally shaped consumer behavior. It is this ‘cognitive disconnect,’ with its siren song ‘Buy, buy, buy. It could be free, free, free’ that constitutes the cornerstone of the Credit Card Nation.”

And so, it is not surprising that holidays are used or created as national events to spur consumption. After months of financial volatility, “Black Friday” is seen as a make-or-break event.

Will it send a cathartic and upbeat signal that the economy is back? Can all the shoppers be counted on to launch the holiday shopping season with a big bang?

In the malls, preparations had been made for five months with advertising dollars set aside for promoting sales and deep discounts to lure the shoppers who had, in effect, been boycotting the stores in September and October. Ingenious plans for opening earlier and staging “midnight madness” sales to trigger a stampede were put in place.

You have seen the commercials disguised as news stories, featuring perky local news “correspondents” stirring a buying frenzy with upbeat reports on manic consumers waiting feverishly to rush into malls the night before.

Bill Bowles writes about this on his CNI Blog: “The problem is that many of us have been force-fed with a diet of nothing but passive, uncritical consumptionism, indeed, we are addicted to the stuff; breaking such powerful habits is what this is all about; it’s about getting people to think critically again about what’s going on and why and what, if anything, we can do about it.”

Bowles also ties this cultural affliction, sometimes known as affluenza, back to our dependence on a media system that won’t really allow other voices to be heard.

Were most media outlets connecting any dots between the annual shopathon and the “severe recession” that many economists are forecasting and the rest of us are living?

Were there any warnings to the public to save their rapidly inflating money for expected harder hard times? Was there any explanation of how prices have sharply risen and, thus, the discounts, often “teaser” rates just like the ones offered sub-prime loan victims, are really not all they are cracked up to be? No way!

Where are the stories alerting us to this coming calamity on the front pages of the newspapers? They aren’t there. It is just not in their interest to carry them, but years back, MTV pointedly rejected an ad from the Cultural Jammers Network urging a “Buy Nothing Day.”

It is not surprising that it was a call from Adbusters, a leader of the anti-consumption movement, that helped galvanize the occupation on Wall Street that since morphed into a global movement.

Many of the shoppers this season are charging it, even though all the credit card companies have jacked up rates driving the real cost of shopping higher, and even though many people owe more than ever. The companies are banking on them. The day after Christmas, VISA will report on how much business was done. In years past, they called it “disappointing.” They will likely again this year.

That’s because of the steady decline of our economy thanks to illegal practices initiated by white-collar predatory lenders backed by our biggest banks and hedge funds, as well as the inability of regulators to regulate and a complicit media to blow the whistle, which caused a multi-billion dollar economic crime that is still in progress.

In years past, the New York Times sent reporters into the stores and found “desperation rather than celebration.” By Monday, in recent years, Wall Street was “glum,” according to Fox News. So much for a Black Friday bounce for Wall Street.

Said Manning, “Clearly, the winter holiday shopping season will need a much more enthusiastic response from higher income households if it is to prosper, given depreciating home values and rising daily living expenses.”

Frederick Crawford, managing director at AlixPartners, a turnaround consulting company, said that amid economic challenges, people are buying fewer gifts. “Clearly, it was mission-based shopping,” Crawford said. “People had their list, and they were very specific in what they were looking for.”

So what are you looking for? Forget that new Laser TV and all the crappy toys we buy only to see them destroyed a week later.

There can be no real turnaround without fundamental changes in how our economy functions, when it does. More regulations are needed, as are major reforms in all of our institutions, financial, political and judicial.

That’s why the Occupy Movement is so needed because it is raising the right questions. Now, it needs a strategy to “Occupy the Mainstream” and challenge the people behind the sickness of excessive consumption, and appeal to and organize the people who are its ultimate victims.

Answer to question above: no, shopping will not save us.

4 comments for “Will Holiday Splurge Save US Economy?”