Driven from its iconic encampment in Lower Manhattan, the Occupy Wall Street movement struggled to recover its political footing and find a new geographical center but its success in changing America’s economic discussion can’t be doubted, says Danny Schechter.

It was strange, after all these weeks, to be on the outside looking in at a new set of occupiers who were there because they have the guns and we don’t.

When Mao said that “power grows out of the barrel of a gun,” he most assuredly did not have anything like Occupy Wall Street on his mind, but somehow the insight applies.

The recent attacks on Occupy encampments may have their origins in decisions by federal agencies. It has been reported that the Mayor of Oakland admitted that 16 cities consulted with the Department of Homeland Security about the protests. 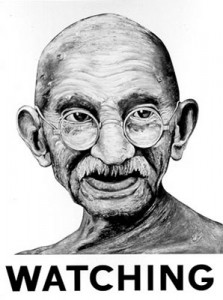 Gandhi as depicted in a poster by Robbie Conal (robbieconal.com)

In the takeover of Liberty Square/Zuccotti Park during the early hours of Tuesday, more than 200 people were arrested, amid teargas and selective physical violence against resisters.

Soon, all the tents were gone: Medical, Media, The Kitchen and The Library, as well as all the work group locations that I showed in my film a week earlier.

With the park then power-cleaned and pristine, the cops were in command, barricades on the outside. Contractors employed by Brookfield Properties, the park’s owner, were on the inside, looking all corporate and regimented.

Activists with badges calling themselves the “99%” were soon watching the triumph of authority with pains in their hearts from behind the barricades while a dozen TV trucks set up their antennas to broadcast live on this latest confrontation,

The tabloid media were gloating earlier in the day. “BEAT IT” was the headline in the Daily News; Rupert Murdoch’s  NY Post had been tipped in advance and covered the expulsion like a cheerleader.

Earlier in the day, a liberal judge had temporarily ordered the police to allow the protesters to return to the park with their stuff, but the case went back to State Court. The cops ignored the ruling and by late afternoon had a new one that exonerated their eviction.

CBS reported, “A New York judge has upheld the city’s dismantling of the Occupy Wall Street encampment, saying that the protesters’ First Amendment rights don’t entitle them to camp out indefinitely in the plaza.”

State judge Michael Stallman, a liberal who had worked for a liberal City Council member, on Tuesday denied a motion by the demonstrators seeking to be allowed back into the park with their tents and sleeping bags.

CBS News legal analyst Andrew Cohen reported that the key paragraph in the judge’s ruling is as follows: “Here, movements have not demonstrated that the rules adopted by the owners of the property, concededly after the demonstrations began, are not reasonable time, place, and manner restrictions permitted under the First Amendment.”

“Time, place and manner” restrictions on speech like the demonstrators had petitioned against have a long history in American law, going back at least to the 1960s. It is unlikely that this ruling will be overturned on appeal, if it is appealed at all.

“At the end of the day, if this movement is only tied to Liberty Plaza, we are going to lose we’re going to lose,” said Sandra Nurse, one of the organizers, referring to another name for the park. “Right now the most important thing is coming together as a body and just reaffirm why we’re here in the first place.”

The Post reported, “With tensions simmering all day, demonstrators had spent hours surrounding the now-closed park near Wall Street as they waited for the judge’s decision. Hours after the city forcibly evicted protesters, scrubbed down the park and closed it, Occupy Wall Street protests scattered across downtown Manhattan.

Earlier in the day, protesters thought they had a new space to occupy, a mile away at Sixth Avenue and Canal Street on a property owned by Trinity Church, a religious institution with vast holdings in Downtown Manhattan. They called for a new mobilization at the site, an unused playground that is a now site for new construction.

Hundreds showed up with banners but so did the police in riot gear. Soon a “White Shirt” commander named Esposito arrived to take command. He ordered the occupiers off the site. Apparently someone else at Trinity had reneged on the earlier invite.

Some of the protesters left but at least 16 were swiftly arrested with one set of cops telling us to get off the sidewalks and others to get on them. Some journalists were also taken into custody. One woman in a wheel chair was let go.

Most of the demonstrators left the site and headed back to Zuccotti Park which, later, let some back in after searching them. They were told they cannot sleep there.

Clearly there is a new challenge here, to build the movement without a residential base. Two New York churches are now offering out-of-town demonstrators places to stay and others will no doubt extend hospitality. Other sites may be found, but their “liberated zone” has been lost for now.

Richard Trumka, the head of the AFL-CIO, issued a statement calling for more protests on Nov. 17 when some activists vow to shut Wall Street down. His statement seemed unusually militant:

“They can take away the tarps and the tents. But they can’t slow down the Occupy Wall Street movement. The 99% is undaunted. Occupy Wall Street’s message has already created a new day. This movement has created a seismic shift in our national debate, from austerity and cuts to jobs, inequality and our broken economic system.”

So, clearly, despite the loss of the Park, this movement will move on. The question remains: where is it moving and how can it bring along the large number of Americans who support it?

When the police were doing their thing, no doubt, only following orders, demonstrators chanted, “This is what Democracy looks like” and “No riot here, take off your riot gear.”

New Dissector Danny Schechter covers OWS daily in his Newsdissector.com blog. He also reports for AlJazeera and other websites. He made the film Plunder on Wall Street’s financial crimes. (plunderthecrimeofourtime.com) Comments to dissector@mediachannel.org

5 comments for “After the Zuccotti Park Raid”