Perhaps unavoidably, history is filled with mysteries, both recent and in the distant past. A great example of this fact in the literary world has revolved around the actual authorship of Shakespeare’s plays, a topic that has been fictionalized into the new movie Anonymous, as Lisa Pease explains.

The film Anonymous deals with a longstanding debate many people have never heard about: the question of who wrote the plays of William Shakespeare. While the answer seems obvious, numerous scholars have concluded the answer is anything but.

Some of the many notables who have challenged the notion that the barely educated Shakespeare wrote those brilliant works, filled with literary and cultural allusions, include Sigmund Freud, Samuel Clemens (Mark Twain), Charlie Chaplin, Orson Wells, famed Shakespearean actor Derek Jacobi, Malcolm X, Helen Keller, James Joyce, and Lewis Lapham, among others. 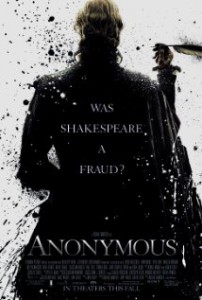 Some of the issues raised include these: Shakespeare’s plays display a vast and in-depth array of learning that his grade-school education could not have provided. Fourteen of Shakespeare’s plays take place in Italy, but William Shakespeare never went to Italy. Most of his plays deal with the intrigues of the nobles, but Shakespeare was a commoner.

In addition, not a single document has ever surfaced written in Shakespeare’s own hand, an oddity shared only by his contemporary Christopher Marlowe, who some have speculated wrote Shakespeare’s plays after faking his own death. Yet numerous handwriting samples exist for many of their lesser-known contemporaries.

Early theorists thought perhaps the learned Sir Francis Bacon or poet Ben Johnson might have written the works under the name of Will Shakespeare. One late 19th century theory posited that the name Shakespeare was used for a collective of writers that included Marlowe, Bacon, and others.

Another theory favored around the turn of the previous century was that William Stanley, the Sixth Earl of Derby, wrote the Bard’s words.

The theory the movie is based on, however, is one of the current mainstream theories regarding the authorship question.

In 1920, an English schoolmaster named John Looney set out to try to uncover Shakespeare’s true identity. He made lists of allusions and references in Shakespeare’s work and then tried to map them to one of Shakespeare’s contemporaries. He found a remarkable fit in the Earl of Oxford, Edward de Vere.

De Vere had been a child prodigy who developed a serious interest in the arts and wrote several poems under his own name. He attended college and was surrounded by a bevy of tutors. He lived inside the Court bubble for a good portion of his life, and saw the intrigues of the nobles up close.

He lived in Italy for two years. He was stationed in Scotland for a couple of years. He studied law at a place known for mounting dramatic productions. And on and on.

Naturally, there are rebuttals to these theories. While the dating of Shakespeare plays is an inexact science overall, those who think Shakespeare wrote his own plays have a strong argument in The Tempest, which seems to be based in part on a famous shipwreck that happened after de Vere died.

The film will not decide the issue for you. It simply presents its own theory, fictionalized, of course, of what might have happened.

The film is bookended by a contemporary device, reminding the audience that what follows is itself a play, a story, and not history or documentary. And with that context firmly in place, the wild ride through Elizabethan history, arts and politics, and the intersection thereof, begins.

The story shifts back and forth between the older de Vere and his younger self, with key points in his life and English history highlighted. The story is breathtaking in its intricacy, a delicious, hearty meal of Elizabethan era intrigue.

The story centers around the period where Queen Elizabeth was nearing the end of her life and the question of succession was on everyone’s mind. But the tangled history of Britain’s monarchy provided no easy answers. Add to this mix a few more theories about incest and secret descendants and you have a storyline that roils like a witch’s brew.

Although the film is graced with the talented Rhys Ifands as Edward de Vere, Vanessa Redgrave as the so-called “Virgin Queen” and Edward Hogg as the Queen’s trusted advisor Robert Cecil, among others, the real star of this film is the story.

Billed as a “political thriller,” it’s an adventure in alternative history one won’t soon forget. Check your skepticism at the door, and open your mind to a fascinating tale of Shakespearean proportions.

The film also celebrates the sheer force of words from both a positive and negative point. Words can be used to sway populations and even royals to action. Words can also be used to malign and betray.

Those who wield words well have tremendous advantage, then and now, as the film itself demonstrates. The people I saw the film with were mostly unfamiliar with the authorship controversy. On the way out, many expressed a newfound curiosity about the matter.

Lastly, the film is both an homage to and a warning about following one’s passions. In the end, our passions define us, for better and for worse.

As a postscript, V for Vendetta fans might note that the Gunpowder plot of the “Remember, Remember the Fifth of November” rhyme happened just four years after these events and contained some of the participants from the Essex Rebellion, a key event in Anonymous. The plot was foiled by the same Robert Cecil, reminding us that history is one long through-line, no matter where you enter it.