In a final act as chairman of the Joint Chiefs of Staff, Adm. Mike Mullen lashed out at what he saw as collusion between Pakistan’s secretive spy agency and militants who mounted daring raids against U.S. targets in Afghanistan. But Gareth Porter reports for Inter Press Service that the Obama administration remains split on this analysis.

Dissension over Adm. Mike Mullen’s accusation that the Haqqani network of Afghan insurgents is a “veritable arm” of Pakistan’s intelligence agency and the revelation that a U.S. official met with a Haqqani official have provided new evidence of a long-simmering struggle within the Barack Obama administration over how to deal with the most effective element of the Afghan resistance to U.S.-NATO forces.

One issue under debate is whether is whether military force alone can settle the problem of the Haqqani network or if a political settlement is necessary.

The other issue is whether the United States should continue to carry out a drone war against the Haqqani network in defiance of Pakistan’s demand for a veto over the strikes, or reach an accommodation with Pakistan that would narrow the focus of the strikes. 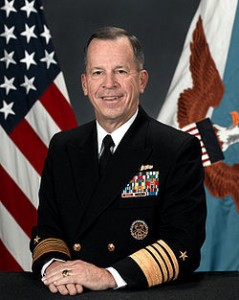 That policy debate pits top military leaders, Pentagon officials and the CIA, who want to put priority on pressuring Pakistan to attack the Haqqani forces, against those in the Obama administration who doubt that the military effort can be decisive and support a political approach to that key insurgent force.

The military, the Pentagon and the CIA have been pushing aggressively since late 2010 to get the administration to force the Pakistani military leadership to carry out a major offensive against the Haqqani leadership and forces in North Waziristan, despite an intelligence assessment that Islamabad will not change its policy toward the Haqqani group.

Just days before his tenure of chairman of the Joint Chiefs of Staff ended, Mullen took advantage of the consternation of the entire Obama administration over the 20-hour siege of the U.S. Embassy and U.S.-NATO headquarters in Kabul Sept. 13 to raise the issue of Pakistani ties with the Haqqani group at a higher level of intensity.

He sought to exploit what he called “credible evidence” that Pakistan’s Inter Services Intelligence agency (ISI) was involved in the planning or execution of the Kabul attacks.

It soon became evident, however, that Mullen was not speaking for a united Obama administration. White House spokesman Jay Carney responded to a question about Mullen’s remarks on Sept. 28 by saying it was “not language that I would use.”

A Sept. 27 article in the Washington Post quoted an unnamed U.S. official as saying that Mullen’s charge was “overstated” and that there was “scant evidence” of ISI “direction or control” over the Haqqani group.

Then Washington Times Pentagon correspondent Bill Gertz suggested Sept. 28 that the criticism of Mullen was coming from officials in the intelligence community and the State Department who wanted to relax the pressure on Pakistan over the Haqqani network rather than intensifying it.

The critics were calling for cutting back sharply on drone strikes in northwest Pakistan, according to the Pentagon official who leaked the disagreement to Gertz. Their argument, according to Gertz’s source, was that continuing the strikes at the present level is unlikely to damage Al-Qaeda any more than it already has been.

That argument parallels those made by former Director of National Intelligence Dennis Blair in an Aug. 14 New York Times op-ed piece.

The vast majority of the drone strikes over the past two years, however, have targeted the Haqqani network, not Al-Qaeda or the Pakistani Taliban. The drone war has therefore become the basis for an alliance between the leadership of the CIA and the military in support of pressure on Pakistan’s military over its failure to attack the Haqqani network.

The military and the CIA have argued strongly against negotiating with the Haqqani network. In June 2010, then-CIA Director Leon Panetta declared publicly, “We have seen no evidence that they are truly interested in reconciliation where they would surrender their arms, where they would denounce Al-Qaeda, where they would really try to become part of that society.”

That position also reflected the interests of the U.S. military. Panetta’s move to Defense and his replacement by Gen. David Petraeus at CIA ensures that the same alignment of interests will continue.

But the Obama administration’s December 2010 strategy review produced a potential alternative to that military-CIA approach.

An intelligence assessment circulated just as the 50-page classified review of progress in Afghanistan and Pakistan was being completed concluded that Pakistan was not likely to agree to carry out a major military operation against the Haqqani group, regardless of U.S. pressures. It also suggested that, without such a change in Pakistan’s policy, the U.S. military strategy in Afghanistan couldn’t succeed.

That strengthened the hand of those who had been skeptical about the military’s approach to the problem. The result, according to sources familiar with the document, was that the strategy review suggested the need for a “political approach” to the insurgency in general and the Haqqani network in particular.

The review, which is described as “diagnostic” rather than “prescriptive,” did not mandate such a political approach, nor did it define what it would entail, according to the sources. The political approach “wasn’t off the ground yet,” one source told IPS.

The implication, however, was that the Haqqani network would have to be integrated into the broader U.S. strategy of “dialogue” with the Taliban insurgent leadership, even as military pressure on the insurgents continued. It could not go further than that, because Obama had not made a decision to enter into peace negotiations with the Taliban.

After the December review, Pakistan stepped up its effort to persuade the United States to deal directly with the Haqqani network, telling the Obama administration that it could bring the Haqqanis to the negotiating table.

Despite opposition from the military-Pentagon-CIA phalanx to a Haqqani role in negotiations, those in the State Department and the White House who were backing a broader strategy of negotiations for Afghanistan and hoping to ease tensions with Pakistan supported separate talks with the Haqqani group.

In a hint of the direction U.S. policy was tilting, Mullen, who was no fan of direct contacts with the Haqqani network, declared in June that some members of the network might be open to “reconciliation”.

ABC News revealed on “The Blotter” Oct. 3 that a U.S. official had met with Ibrahim Haqqani, the son of the patriarch of the organization, Jalaludin Haqqani, a few months before the Sept. 13 Kabul attacks.

Sirajuddin Haqqani, who is now in day-to-day command of the network, told BBC the same day that the U.S. had raised the possibility of representation of the network in the Afghan government.

Although no U.S. official has confirmed that claim, it is consistent with past efforts to divide the Haqqanis from Mullah Mohammed Omar, to whom the Haqqanis have pledged their loyalty.

In May 2004, Seyed Saleem Shahzad reported in the Asia Times Online that Siraj Haqqani had confirmed a report Shahzad had gotten from another source – presumably ISI – that the United States had offered through ISI to make Jalaludin Haqqani prime minister.

The elder Haqqani’s response, according to his son, was, “After so much killing of Afghans through ‘daisy cutter bombs’ and like, shall I sit in the government under U.S. command?”

While rejecting offers to end their resistance war in return for a position in the government, the Haqqanis are ready to join broader negotiations whenever Mullah Omar agrees to begin talks, as was confirmed by a Haqqani network source to Reuters on Sept. 17.

Last week, unnamed U.S. officials were spreading the word to news media that there was reason to believe the Haqqanis were to blame for the assassination of Afghan High Peace Council Burhanuddin Rabbani, despite the apparent absence of any real evidence the group was involved.

That was another indication that the debates over the two Haqqani-related issues are far from being resolved.

← Reagan’s ‘Greed Is Good’ Folly
The Moral Imperative of ‘Activism’ →