Finally, a truly “populist” movement not like the Tea Party funded by billionaires to serve the interests of billionaires has arisen in America to challenge the growing economic inequities in U.S. society. Phil Rockstroh found his time with the “99 Percent” movement at the newly dubbed Liberty Plaza invigorating.

The ongoing exercise in democracy transpiring in and around the Occupy Wall Street site in Lower Manhattan imbues one’s heart with resonances of the real.

Many reasons factor into the phenomenon: Here, for example, one does not feel scammed and demeaned gripped by the sense of futility, even embarrassment, experienced at even the thought of participating in the big money-skewed, sham elections staged in the corporate oligarchic state.

In our era, in which our minds are distracted and circumscribed by relentless, manic formations of instant information and evanescent imagery, we too often dwell in domains devoid of musk and fury, of the implications carried by mind-meeting flesh; therefore, one is often nettled by an abiding hollowness resultant from voluntary exile in these weightless realms of electronic ghosts. 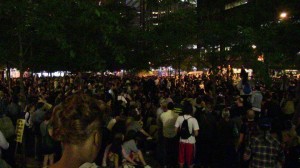 The events unfolding in this place bear little resemblance to contrived reality TV tawdriness or pro sports/corporate rock, empty spectacle. Although some of the events transpiring here have been broadcast, webcast and tweeted in “real time” — in vivid contrast — events are unfolding in time that is real.

In Liberty Plaza, both the winged spirit of commitment and the rag-and-bone shop of the heart abide. Acting upon the human yearning not to live in chains, those assembled here are attempting to navigate their way out of the wasteland of isolation and alienation inflicted by the inverted totalitarianism of the corporate/consumer/national security state.

“Protest that endures, I think, is moved by a hope far more modest than that of public success: namely, the hope of preserving qualities in one’s own heart and spirit that would be destroyed by acquiescence.” ~ Wendell Berry

The barriers: This photo (of Occupy Wall Street protesters entrapped on the Brooklyn Bridge by the NYPD) is emblematic of existence within the constraints of inverted totalitarianism.

The image is evocative of how the present order works to contain and narrow (if you will, kettle and cage) our conception of both the right to free expression in the public sphere and, by implication, within the psyche of an individual. 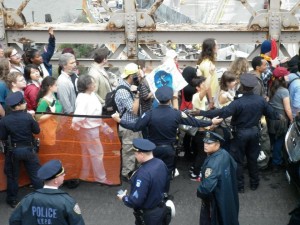 For instance: Notice, under “normal circumstances,” how even the thought of pamphleteering or making an attempt at public oration in those areas of hyper-commercialized commerce e.g., malls, big-box retail stores and sports arenas — squatting upon most of the landscape of the U.S. is summarily dismissed.

An individual who attempts to exercise his right to free speech and free assembly in those locations is expelled on sight by private security types maintaining that the reach of one’s rights to free expression ends where private property begins.

In general, in daily life, living under the inverted totalitarian nature of the corporate state, the walls that imprison an individual are invisible to the eye, even as they create bleak barriers within.

For example, if you are arrested while exercising your (allegedly) constitutionally guaranteed rights during an act of public protest, future employers will be privy to the information and chances are that such information will not be exactly helpful in your attempt to gain employment; hence, many are dissuaded from protest.

Yet, the New York City power elite can be thanked for the following: By actions such as these, captured in photos like this one, they reveal to us the true nature of the society that they have created, both extant and internalized within. 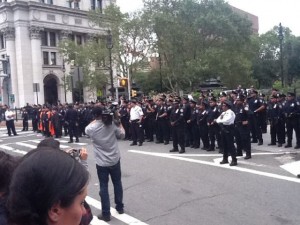 And this is what the implicit oppression of the corporate oligarchic state transforms into when challenged. Take a good look, then, ask yourself, as the song goes, which side are you on?

The agenda of the parasitic corporate and criminal Wall Street elite (whose financial power and political influence have increased unchecked for more than thirty years) has been: to attain maximum profits by maximum exploitation of labor and resources.

To ensure the labor pool remains submissive, the corporate class tyrannizes the workforce with threats to their job security and other Shock Doctrine strategies designed to beat an individual down, as all the while, their PR flacks promulgate the Orwellian doublethink at the empty core of corporate/consumer state propaganda i.e., submission to exploitation will, one day, yield to financial freedom that the economic shackles that yoke an individual to a life of “free” market-enforced submission are, in fact, his wings of liberty.

And that is something one should bear in mind when considering the subject of the attitudes and actions of the NYPD regarding popular uprisings such as the one ongoing in Lower Manhattan.

In the first few days of the occupation of Liberty Plaza, I stopped by and spoke with protesters and police. (The latter only agreed to speak to me, with much hesitation, and, in a few cases outright contempt, if I promised not to record them or reveal their badge numbers.)

I told them that I understand and experience the sort of fear that such dictates, issued from above, level upon a person. I averred the fear instilled in rank-and-file officers by their “superiors” in the department is similar to the fear that folks in the park possess for police in general. 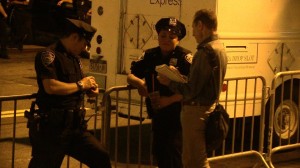 And the fear is identical to that OWS protesters hold in regard to the power Wall Street exerts over their lives.

In this, we, the beleaguered “99 percenters,” share a common plight — an affinity of fear instilled within us by economic coercion.

One cop told me it was nothing personal: He appreciated the protest because of the overtime pay he was pulling as a result of it.

I asked him if he feared that Wall Street might squander his pension fund, and that, “if you come down with a case of ‘billy club elbow’ from beating on the folks here that the crooks on Wall Street might make off with your medical benefits.”

Moreover, that if he saw a man trying to rob the pizza restaurant on the end of the block, he had the power to make an arrest, and, by that token, would it be possible for him and his crew who it appeared didn’t have a lot to do at Liberty Plaza could see fit to move down the street a bit to where the real criminal activity comes down billion-dollar heists, in fact and make a few arrests when the banksters open for business tomorrow?

He said he couldn’t comment on the subject but I could tell he found the fantasy appealing.

But, bear this in mind, when considering the uncivil attitudes and unconstitutional actions of the NYPD regarding street protest such as the Occupy Wall Street activities ongoing in Lower Manhattan, in particular, and the lack of deference to the rights of the public, in general, displayed by police agencies, at both the local and federal level: Police forces, by and large, are bureaucratic organizations, comprised of authoritarian personalities who evince a top-down, militarized organizational structure.

Most of the individuals therein harbor a hierarchical concept regarding the exercise of power and possess an unquestioning fealty to the maintenance of order.

Therefore, the police will serve as a de facto private security force for the corporate oligarchs and Wall Street elite, as well as the structure of the National Security State. Accordingly, the safeguarding of individual rights and providing security for those groups and individuals bereft of power means little to them.

Even if an individual officer harbors sympathy for those who dissent, his mission is not to protect the powerless; conversely, the mission of police organizations is to maintain the status quo; and the status quo of the present order translates into vast wealth inequity created by an entrenched system in place to protect the powerful (in this case Wall Street Banksters) from the consequences of their criminal activities.

(Apropos, the $4.6 million with which J.P. Morgan Chase, last week, greased the palm of the NYPD.)

Thus Freedom will be pepper-sprayed and thrown face first upon the pavement, while Wall Street Banksters’ Gulf Stream Jets lift off from the ground and slice the clear, thin air.

There is a sign in Liberty Plaza proclaiming, “occupy everything” and its sentiment arrives at the essence of the situation.

Yes, occupy everything, starting with your own heart. Otherwise, it will be commandeered by the forces of the church, the state, the corporation, the bully on your block, the passive-aggressive friend who is “just here to help,” even the demands of your own egoist agendas that bore to indifference the heart of the world and soul of the age.

If you don’t recognize your humanity, who will? Who is more qualified to occupy your life than you? Who is closer to the situation? Who else is qualified to arrive at an original take of the question at hand? 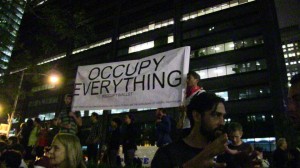 And you might find the place to make a stand in the struggle to retake your essential self is in public space, among throngs of others engaged in likeminded struggle among others who have heeded a similar call and thus have arrived in those equally troubled locations — the U.S. public arena and the American heart.

Occupy your own heart; the soul of the world longs for your companionship.

“The question is not what am I doing in here, but what are you doing out there?”

Phil Rockstroh is a poet, lyricist and philosopher bard living in New York City. He may be contacted at: phil@philrockstroh.com  Visit Phil’s website http://philrockstroh.com / And at FaceBook: http://www.facebook.com/profile.php?id=100…

4 comments for “Occupying the Heart of the Beast”