The economic distress caused by out-of-control Wall Street greed finally has prompted a dramatic public response in the form of protesters occupying a park in the Financial District of New York City. Slowly, the movement has attracted broader support, reports Danny Schechter.

There was a rumor on Friday that the band Radiohead would be dropping by the #Occupy Wall Street encampment. They had just been on “The Colbert Report” and their fan base is huge among the very demographic of younger people drawn to the protests now beginning their third week. 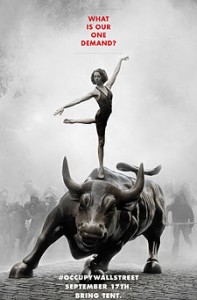 And so more people came than organizers expected. Loads of people!  Except, alas, for Radio Head. The band had reportedly called to express support that led some to conclude that they were on the way.

This demonstrates again the power of celebrity to draw a crowd. What did impress the activists in Zuccotti Park in the Financial District is that the Radiohead fans actually stuck around and took part in the activities and a march that went north to Police Headquarters protesting the pepper-spraying of activists.

That police action against #Occupy Wall Street protesters had the other unintended consequence of persuading the news media, which had convinced itself that this growing assembly was not worth covering, to cover it.

Soon, thanks to research by the mysterious “Anonymous,” activists were able to identify the police commander responsible for using a chemical weapon against female protesters.

Then, Jon Stewart stepped in Thursday with a report on the cop he called “TONY BALONEY,” ridiculing him and the police force.

Perhaps, that is why the NYPD was more restrained Friday night and backed down with threatened arrests of a group of activist bicyclists called Critical Mass, that had shown up to show solidarity.

When it was announced at a nightly meeting (called the “General Assembly”) that the bikers were at risk, hundreds of activists rushed out to show some solidarity to them and, then, there were no arrests.

Perhaps this incident was evidence of a sign I saw reading “The power of the people is greater than the people in power.”

#Occupy Wall Street has yet to attract the 20,000 militants they had hoped for but it’s growing and, more importantly, retaining its sense of community, non-violence, and sense of a tolerant community. It is a decentralized.

Most important is that similar actions are already taking place in other cities like a march on Friday in Boston against the Bank of America. An even bigger one is being planned for Washington in October.

Other organizations are supporting this emerging movement. Local 100 of the Transport Workers Union say they “applaud the courage of the young people on Wall Street” and are planning to turn out their members next week.

I saw tee-shirts of UAW members and met some activists from the Salvadorian community. Already #Occupy Wall Street sent over a hundred people to back a protest by postal workers trying to save their jobs and the Post Office.

The longer this lasts, and is allowed to last, the more it is likely to grow.

Already intellectuals and writers like Chris Hedges are praising the protesters as “the best among us” and are imploring the rest of us to get involved:

“There are no excuses left. Either you join the revolt taking place on Wall Street and in the financial districts of other cities across the country or you stand on the wrong side of history.

“Either you obstruct, in the only form left to us, which is civil disobedience, the plundering by the criminal class on Wall Street and accelerated destruction of the ecosystem that sustains the human species, or become the passive enabler.”

“Young rebels often manifest a moral clarity that awakens and prods the rest of us. Through their direct actions, they become a critical force, holding up a mirror for an entire society to take a look at itself, what it has come to, and what choices lay before it.

“The historic example is the four young African American students that sat at a lunch counter and ordered a cup of coffee in Greensboro, North Carolina back in 1960. The Wall Street protests are thus a clarion call to the trade unions and everyone concerned with economic and social justice.”

This weekend, Occupy Wall Street is promising to make an assessment of it strengths and weaknesses and to begin a debate about next steps.

The last two weeks have been a tremendous learning experience for the activists who even doubted their staying power. Now their non-organization has organized with a food committee, media center, sanitation department and task force to encourage more debate.

David Degraw of AmpedStatus.com that pushed for the protests sees the movement defining itself. He told me on my weekly News Dissector Radio Show on Progressive Radio Network that he expects more clarity to emerge from a debate that’s already underway.

He writes, “As the occupation of Wall Street moves into its third week, there are many questions about the organizers behind the ongoing protests and the origins of the 99% Movement.”

He has encountered resistance from parties unknown to his efforts to encourage a debate.

“As AmpedStatus was pushing for a decentralized global rebellion against Wall Street and actively supporting the Egyptian uprising against the IMF and Federal Reserve, the attacks on the site escalated. In what appeared to be a fatal blow, the entire ISP network that the AmpedStatus.com site was hosted on was knocked offline, hundreds of sites were also affected and the AmpedStatus.com web hosting provider said that they would no longer be able to host the site unless it was moved to a service that was significantly more than we were paying or could afford.

“With a very limited budget, and in complete desperation, AmpedStatus put out a call for help.”

The computer whiz Anonymous stepped in and helped the site recover. It is now on the leading edge of the movement. Other sites like Livestream carry the events around the clock the way Al Jazeera reported on the uprising in Egypt. #OccupyWallStreet disseminates tweets around the clock

Many in the media wrote off the young people in Egypt, and proved to be as out of touch as much of the American media is today. As Bob Dylan sang decades ago to a reporter from Time Magazine, “There’s something happening and you don’t know what it us, do you”

News Dissector Danny Schechter blogs about the protests on News Dissector.com. His latest film, Plunder The Crime of Our Time” called for protests against financial crime. (Plunderthecrimeofourtime.com) Comments to dissector@mediachannel.org.