Pulitzer-winning author Alice Walker sees a reflection of the injustice done to African-Americans in today’s treatment of the Palestinians, leading her to object when the artwork of Palestinian children is barred from U.S. museums and to join a flotilla that challenged Israel’s blockade of Gaza, as Dennis Bernstein reports.

Alice Walker is Pulitzer Prize winning poet, author and activist. She participated recently in the U.S. Boat to Gaza, which was a part of the Freedom Flotilla, to break the Israeli embargo on the Gaza Strip.

Last year, a flotilla was attacked by Israeli commandos and a number of people were killed and wounded. Walker’s boat was stopped by Greek authorities before it could traverse the eastern Mediterranean to Gaza. 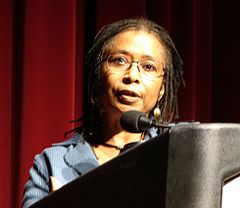 DB:  I want to start with the recent attempt by the Children’s Museum of Oakland to prevent Palestinian kids from showing their art. You wrote a very moving piece on your web site. It was very personal. Could you just briefly outline what you wrote and your response to this censorship?

AW: Well, I was basically saying that the children need to have exposure of their art because it will be a wonderful way to help them heal from the trauma of being bombed and watching their friends, and sometimes parents, die.

And it’s unconscionable that any adults, especially in this part of the world, and lo and behold in Oakland would want to deprive these children of a venue in which they could expose some of their grief and some of their pain, and of course, some of their art.

And so I just very strongly urge all of us to go to see this art. I’m not sure where it will be shown.

I think they had a better shot there. And now they are getting requests for it to be a traveling exhibition around the world. It is incredible. Can I ask you to share the personal part of what you wrote?

Because I have seen as a teacher the impact of, very troubled kids, oppressed kids, kids who have faced difficult times being able to get through it, through self-expression.

And this, the part of this that bothered me the most is that the exhibit was advertised, the invitations were sent out, the workshops were set up, the kids were excited and they were told “No, it wasn’t going to happen.” Could you share the personal side of what you wrote?

AW: There are a couple of things. One is, I was injured myself, as a child. I was playing cowboy and Indians with my brothers and one of them accidentally shot me in the eye. And that led to a lot of suffering, and a lot of grief and a lot of pain.

And I started writing poetry at that time when I was eight or nine years old. And my relatives encouraged me to share it, to show it to people. And that was a part of my healing. And so I could easily see that that could help these children.

That having the venue denied to them is a way of making them remain locked in their own private suffering. And this is something that adults with money, in this case, could do to these little kids.

The other part that was so, that came to mind as I was writing this essay was how in 1939 Marian Anderson had been denied.

AW: The great contralto. She had been denied a venue at the Constitution Hall, at Constitution Hall in D.C. by the Daughters of the American Revolution, who were just upset that the place was going to be integrated.

And, so Anderson’s friends, including the President, [Franklin] Roosevelt and Eleanor Roosevelt came to her defense and she was allowed to sing on the steps of the Lincoln Memorial.

And she actually attracted seventy-five thousand people of all colors and kinds, and everything. And it was one of the biggest turn outs ever, up to that time, at the Lincoln Memorial.

And so I was just reminding us, that these battings and attempts to censor people, they often backfire. And that is something that we should remember.

It strengthens us as well, because we begin to see the forces that are against us. They are fleshed out, they come out of the walls and woodwork, wherever they’ve been hiding and pretending to be upstanding, kind, and generous people.

They suddenly stand revealed as the really very narrow hearted people that they are, and so we don’t have to be fooled. And it’s a great thing not to be fooled by people.

To have that little bit of consciousness about who is likely to try to trip you up as you start climbing towards your freedom. Yes.

DB:  And just to take off on what you said, it is either you have a very frightening, and difficult, and terrifying, tragic experience happens to you and either you have a chance to express it to people who care and want to hear it or it gets forced down inside of you and manifests as an illness, in various ways. So it can make all the difference in the world.

AW:  It makes all the difference in the world. And in fact, one of the things that you learn from having some fairly dreadful things happen to you, is that you can survive and you can still be happy.

And I like to tell, very briefly, a little story of a leper that I came across in Hawaii, on the island of Molokai. A man whose face had just about been dissolved by his illness, and his expression of just absolute joy was shining through what was left of his face.

And he said “You know one of the things I have learned from this hard life here, is that you can have these terrible things that happen to you and you can still be happy.”

Now this is good news for anybody but especially for a child who feels just completely squashed by an imperial power that bombs its communities and its schools for twenty-two days, non-stop, a child that just has lost parts of its body.

To know that somewhere there is this teaching, and that there are these people and that someone is waiting for them on the other side of the trauma to share with them what they have gained.

You know, you don’t just lose, you sometimes gain a lot from suffering. And they can stand with you and that’s why I love the Middle East Children’s Alliance (Meca).

I love the Middle East Children’s Alliance, because their commitment to these children and to making it clear, not only to the children but to the adults in the world, what it is that we need to be doing together, which is bringing them along, helping them stand, and helping them to see that there is still a possibility of being joyful little kids.

DB:  Why did you decide to join that Flotilla?

AW: Well, I did it because I really believe that it is our responsibility. When the world is out of whack as it is almost everywhere you look. What do you do? And where do you place yourself?

And so it felt like, given my own background in the South with the segregation, and I’m sitting here right now, looking at pictures of both my parents. That I have an obligation given how much I deeply understand this kind of pain, to try to be present even if we don’t get to where we were trying to get to.

We didn’t get to Gaza. But we did get ten miles off the coast of Greece.

DB: And you were turned back.

AW: We were turned back by armed commandos from the Greek coast guard. And we never got to be in confrontation directly with the Israelis. But they were working against us the whole time. They had been sabotaging the other ships, and making it really hard for us to move.

And yet there again, I can’t be discouraged, I feel so much that if you just get off your couch, if you just leave your house, if you just head out to stand with your neighbor, even if they are ten thousand miles away.

DB:  You know, Alice, I’m usually very afraid about everything whatever I do, I tend to do it, but I’m frightened. Now you got on a boat knowing that the last round of the Freedom Flotilla faced extreme violence by Israeli commandos, a number of people died were wounded, how do you deal with your fear. Were you afraid?

AW:  Of course I was afraid, we’re all afraid.  But there is this realization that an earthquake could just right this minute just cover us all up with rubble, we could be sucked out of our car by a hurricane, we could be drowned in these floods that are happening.

In other words, there’s a way in which you have to start to see now, that danger is really everywhere and it’s in every moment so it is better to, I think, to then approach those areas that are dangerous and difficult in that spirit, that well I could lose my life here too at home.

And also now  the thing that I find really remarkable and I felt this way in Mississippi forty years ago, when you reach the other people who are as determined and as dedicated as you are, with the love that you have, it’s a kind of heaven.

And it’s not to be missed if you can possibly manage to get to this kind of circle of people who have evolved. I felt on the boat, in the presence of such goodness, such amazing, spirit and heart. That it made it worth whatever the sacrifice might have been, I mean if I would go, I would go with these people, and how blissful, really.

DB: Finally, and I guess this is the hardest thing for me to understand. We are seeing several recent reports surfacing out of Israel, really put together by the Israelis describing a program, an expanding program of midnight kidnappings, and torture of children as young as twelve years old, by Israeli soldiers.

Sometimes they are taken to the basements of the settlements, illegal settlements, and questioned and masked, but they are taken by hooded soldiers and my question for you and I don’t know if there is a real answer but what drives a people to go to these lengths to silence children and to repress freedom.

AW: Well, I think that one of the things that probably should not have happened for so long is that the constant reiteration of the Holocaust.

I think if we had a slavery industry so that so often you would hear horrible tales about the enslavement of black people, like every time you turn around, we would have some incredibly crazed black people who would be doing some much more violent things because the anger.

I think that whatever happens you are never permitted to evolve beyond your rage. So everything becomes an obstacle to your liberation from your own rage. So you turn into quite dangerous entities in society.

Alice Walker is the author of many books of poems and prose, including The Color Purple, A Poem Traveled Down My Arm, and A Poet Encounters the Horror in Rwanda, Eastern Congo and Palestine/Israel. For a list of Alice Walker’s work go to http://alicewalkersgarden.com/. She spoke with Dennis Bernstein on “Flashpoints,” a news program at Pacifica Radio.

← Taking a Bush Secret to the Grave
‘Moneyball’: The Value of Reason →