Exclusive: At every turn of the debt-ceiling battle, Republicans repeat the talking point that Washington doesn’t have a “revenue problem,” but a “spending problem” as if saying so makes it true. But the reality is that today’s debt crisis is driven more by George W. Bush’s tax cuts than anything else, as Sam Parry explains.

Sometimes you just have to call something what it is. Simply put, congressional Republicans are lying about the federal budget crisis and thus are suffocating America’s chance for an open, honest debate about the tough choices that are ahead.

The most pronounced shift in budget calculations is that federal revenue has dropped from 20.35 percent of the Gross Domestic Product (GDP) in 2000 when the U.S. government was running a surplus to 14.41 percent of GDP today, with the projected deficit for fiscal 2011 at about $1.5 trillion.

A fair-minded review of the budget shows, too, that most of the contributions from the spending side of the ledger have almost nothing to do with President Barack Obama or what is typically described as “reckless spending” in Washington on domestic priorities.

The only “discretionary” item in the budget that has seen any significant increase in recent years is Defense. The rest of these “discretionary” categories Education, Transportation, Environment, Agriculture, etc. have actually decreased as a percent of GDP from around 4 percent in the early 1980s to less than 3 percent today.

With few exceptions, national media pundits uncritically accept the “spending problem” GOP spin without even consulting the data available online to anyone with a search engine.

Yes, federal spending has apparently kissed 25 percent of GDP this year, which is historically high. But, three points must be made:

Federal spending as a percentage of GDP reached a similar level 82 years ago in 1919, at the end of World War I. That year, the U.S. national budget hit 24.13 percent of GDP.

Of course, that was a far simpler time before the existence of Social Security, Medicare, Medicaid or many of the other government programs so vital to modern America. Spending at the start of the 20th Century reflected this, averaging a trivial 2.5 percent of GDP.

And that is roughly where spending stayed until the Great Depression, when spending rates doubled again and averaged 10 percent of GDP from 1933 to 1941.

Then came World War II, which saw a spike in federal spending well beyond anything America had seen before or since. In 1945, spending as a percentage of GDP was nearly double today’s levels, reaching 47.9 percent. That year, military spending accounted for 88 percent of the entire federal budget as America fought a two-front global war.

After the war was won, spending settled in at a new normal that reflected the continuing funding of a larger permanent military as U.S. policymakers financed the Cold War to “stop the spread of communism.” The federal government also undertook investments and spending projects that helped build the country and sustained the middle class from transportation and infrastructure spending to Social Security and Medicare to developing a modern education system.

Between 1947 and 1980, overall federal spending averaged 18.3 percent and spending levels remained relatively stable during these years, especially after 1951, as you can see: 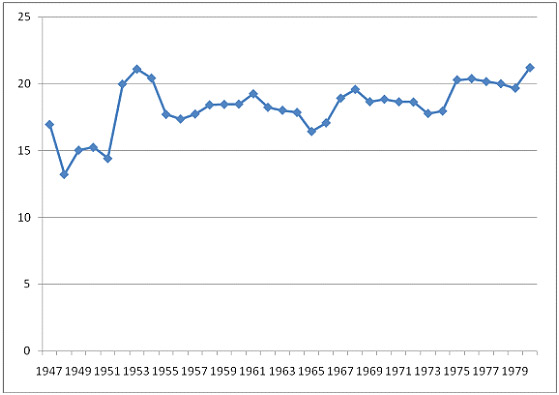 Federal spending as a percent of GDP, 1947-1980. Source: http://www.usgovernmentspending.com/

After Ronald Reagan’s inauguration in 1981, federal spending began drifting up, averaging 21.9 percent of GDP during the Reagan-Bush-41 years. Most of that growth went to a mushrooming Defense budget as President Reagan issued warnings about a supposedly expanding Soviet Empire.

In 1979, military spending represented 5.6 percent of U.S. GDP. Seven years later, that had increased to 7 percent, a 25 percent increase relative to GDP. At the same time, federal spending on Education was slashed from 1.2 percent of GDP in 1978 to 0.5 percent of GDP by 1988. Other domestic programs were held flat or were cut during this period.

Starting in the late 1980s, as Defense spending started to come down after the collapse of the Soviet Union declining from 7 percent of GDP in 1986 to 5.35 percent by 1991 Health Care spending picked up much of the slack.

The Reagan-Bush-I spending binge left the Clinton Administration with difficult choices on how to reduce the then-record budget deficit. Despite pressure from liberals who favored a more aggressive strategy for addressing the nation’s needs, the Clinton team reduced federal spending as a percentage of GDP every year, getting it down to 18 percent by 2000, the lowest level of federal spending relative to GDP since 1974.

You can see how significant these cuts were here: 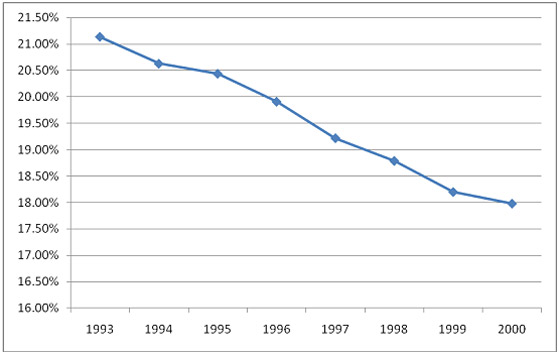 Then came the Bush-II administration, which completely reversed this trend with major spending increases for the military and intelligence services to conduct the post-9/11 “war on terror” and the wars in Afghanistan and Iraq. George W. Bush also pushed through a new prescription drug bill.

Two unfunded wars and an unfunded prescription drug bill will do that to you, as you can see here: 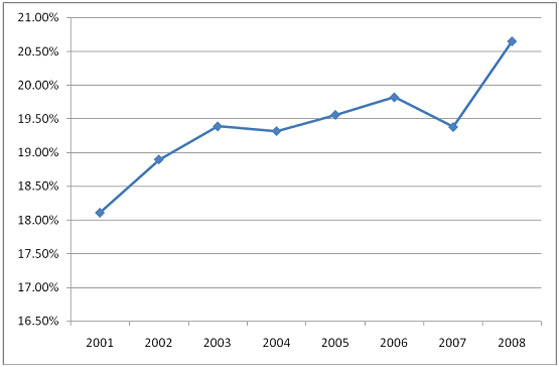 Still, George W. Bush left office with the federal government spending less as a percentage of GDP 20.76 percent  than the average during the Reagan-Bush-41 years.

Which brings us to today. Over the last couple of years, federal spending as a percentage of GDP has indeed surged topping out at 25.3 percent this year.

But that has little to do with so-called “reckless spending” in Washington and has even less to do with Obama specifically.

First, an obvious point: The recession reduced America’s GDP from $14.44 trillion in 2008 to $14.12 trillion in 2009. This automatically increased spending as a percent of GDP by lowering the denominator.

More importantly, the recession has led to hundreds of billions of dollars in temporary spending to stabilize the economy, bail out the financial markets, and provide support for the U.S. auto industry.

GOP talking heads like to complain about many of these programs. But several points must be clarified:

In the next couple of years, assuming the economy recovers and stimulus funds and other economic stabilizers can be withdrawn, federal spending as a percent of GDP is forecast to decline to 23.6 percent next year and to 22.3 percent by 2015.

Which leads us to the debate around the stimulus bill.

Yes, Obama and the Democrats with only a handful of GOP votes pushed through a $787 billion stimulus bill in early 2009. What GOP talking heads never mention, however, is that more than a third of the package wasn’t spending at all. To secure those few Republican votes, a total of $288 billion or more than one-third of the package was dedicated to short-term tax breaks.

That left $499 billion in actual spending, but much of that went directly to the states to help rescue depleted state budgets and to avert large-scale layoffs of public employees. Indeed, only about $85 billion of the stimulus package actually went to things like infrastructure, new energy programs and transportation projects.

Given the economic crisis the country was facing and continues to face an allotment of $85 billion for capital projects and other infrastructure investments seems like chump change. And, given the weakness of the recovery, it appears that it was woefully insufficient to get the economy back on its feet.

But, even if you ignore these finer points and look at the $499 billion in actual stimulus spending, this is a tiny fraction (about 1.7 percent) of the $29 trillion, two-year GDP of the U.S.

And the money has just about run out, which means that long-term it will have a negligible impact on the overall deficit and will have no impact on long-term federal spending levels.

When it comes to spending under President Obama, only two other areas are even worth mentioning:

Otherwise, there have been no other net spending increases of any significance added to the books since Obama was sworn in.

The one debateable caveat to all this is the controversial health care bill signed into law in March of 2010. While there are spending provisions in that law, there are also substantial cost savings. As Obama said repeatedly during the debate, the bill is projected to add nothing to the federal debt.

Altogether, the CBO estimates a net cost savings of $143 billion over the next 10 years with more savings after that.

Going forward, President Obama has already committed the federal government to significant cuts in discretionary programs. For example, the total cost of the stimulus bill is more than offset by the Obama-ordered freeze in non-defense discretionary spending over the next ten years, which will reduce spending in that budget category from 3.4 percent of GDP to less than 2 percent.

In fact, taking these savings into account, the big GOP spending lie gets even more outlandish. Even if you take into account all spending relative to GDP, including Defense and Social Security/Medicare, total federal spending on these programs as a percent of GDP is projected to actually come down over the next ten years — from 25.3 percent of GDP in 2011 to 19.7 percent in 2021.

Of course, these are projections and they depend, in part, on the economy growing as expected and Congress adopting Obama’s spending priorities. But, even if it’s half that reduction, the United States would still be well within the recent historical range on federal spending as a percent of GDP.

There is no question that if you look at this year’s federal spending of 25.3 percent of GDP, it looks high, relative to recent American history.

But, given today’s struggling economy and the projections for federal spending to stabilize and come down — assuming the economy recovers — it should be clear the United States doesn’t face an immediate spending crisis.

The nation does, however, face a revenue crisis. Largely because of George W. Bush’s tax cuts, which he justified by noting that the government was running a surplus in 2000, federal revenues have dropped from 20.35 percent of GDP in the last year of the Clinton administration to 14.41 percent today.

So, no matter what spending programs get cut even if spending were rolled back to around 21 percent of GDP, in line with the levels of spending under recent Republican administrations – the United States won’t stanch the flood of red ink without getting revenue up to about the same share of GDP.

That revenue target would be a bit higher than the historical average of 17.8 percent of GDP from 1947 to 2008. But, given that the United States has run up huge deficits, which means higher interest payments, and given that our aging population requires more Health Care spending, raising federal revenue back to where it was in 2000 or even a bit higher doesn’t seem like such a huge sacrifice.

But don’t expect the Republicans to be at all honest about this. Truth-telling is not what wins most elections and political courage is in very short supply. It’s much easier to get on the right-wing chat shows and repeat the comfortable “It’s a spending crisis” mantra, no matter how inaccurate it is.

Sources for this article include: