As summer comes and tourists again flock to Europe to explore its elegant cities with their ancient culture and their histories of brutal conflicts, Sarajevo offers a unique look into the madness of modern war, something many Europeans had hoped they left behind more than a half century ago. As photo-journalist Ted Lieverman reports, one entrepreneur has turned curiosity about the brutal Yugoslav civil war into a special tour.

We look down from the hills on the intersection of Zmaja od Bosne and one of the broad cross-streets, framed between multistoried buildings.

“That’s Sniper Alley,” says Skender.  “From up here, the Serbs shot civilians trying to cross the open space.”  It looks like an easy shot for a trained sniper with a scope. 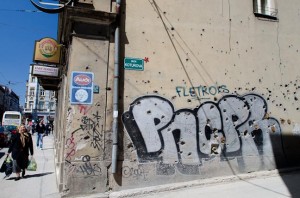 Skender Hatibovic is giving me a special tour of Sarajevo, his home city, which he calls the Siege Tour.  Instead of churches and museums, we visit the spots made memorable by the 1992-1995 siege of this capital city of Bosnia-Herzegovina during the Balkan War in which Yugoslavia imploded and expired.

During that war, Sarajevo, nestled in the valley, was exposed to the military force created by ethnic Serbs living in Bosnia, who held the surrounding hills and poured artillery, mortar and sniper fire onto the civilian population. As many as 10,000 were killed during the siege, 50,000 wounded.

I meet Skender in his office in Bascarsija, the heart of the oldest part of the city. For the next 3 ½ hours, we travel in his SUV while he gives me a detailed account of the siege. He points out the sites usually skipped over in the Chamber of Commerce tours. 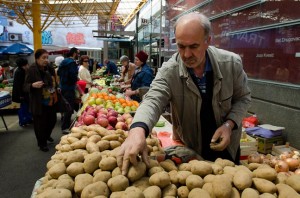 Here is the Markale Market, where 68 died during a shelling in February 1994 and another 38 died in the market across the street in August 1995, he says. Here is the innocuous little house which hid the start of the tunnel built under the airport to smuggle arms to the ragtag Bosnian army defending the city.

Here is the Jewish cemetery in the hills south of the city, where defenders held one edge of the graveyard, Bosnian Serbs the other, and the center was mined (Skender assures me it has been completely cleared of munitions). 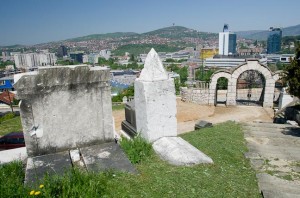 Looking down from the cemetery, Skender points out how precarious life was in the city, how vulnerable they were to the almost continuous shelling. Skender was 8 year old at the time, living with his family in the city.

Some residents foresaw war and left in convoys; his family stayed. Too many people, he says, never imagined a real war could come, and so few preparations were made. For many months after the shelling started, Skender slept in the basement.

Years later, he started running a group of youth hostels, and his guests would ask about the siege.  Almost four years ago, he started offering tours to his guests.

The tours became successful and he founded Sarajevo Funky Tours to provide his services to the public at large. He estimates he’s given about 500 tours so far.

Sarajevo itself has been transformed since the war, its reconstruction fueled by international donations. Most buildings have been repaired or rebuilt, the tourists fill the old city cafes and restaurants. One might think the war was a distant memory — except that the aftershocks still reverberate throughout the country. 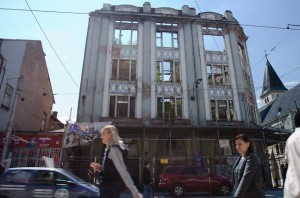 The Serb sector of Bosnia, which styles itself the Republic Srpska, does not cooperate with the federal government, and wants instead to hold a referendum among its population to declare the Bosnian government lacks the authority to prosecute Bosnian Serbs for war crimes.

Only the strongest threats from the UN’s High Representative and the European Union finally dissuaded the Bosnian Serbs from creating a new crisis. In the meantime, the government seems unable to combat corruption and unemployment.

Two weeks after I left Sarajevo, the Serbian government arrested Ratko Mladic, the Bosnian Serb general who is alleged to be responsible for many of the atrocities during the war, including the massacre in Srebenica and the civilian deaths during the siege of Sarajevo.

Several thousand ultranationalists rioted in Belgrade against the Serbian government’s intention to hand Mladic over to the war crimes tribunal in The Hague. In the meantime, the trial of former Serb leader Radovan Karadzic goes forward as witnesses at The Hague continue to document the bloody deeds of that period.

The passions that led to the Balkans wars in the 1990s are not yet fully dissipated.

Still, Skender, who is finishing a masters degree in economics, says he and his friends are staying in Sarajevo. It’s one more hopeful sign for a city that lived on little more than hope for a long time.

Ted Lieverman is a free-lance photographer based in Philadelphia.  (All rights reserved by author.)

← How Gates Boxed in Panetta
How Greed Destroys America →