Get a paperback copy of American Dispatches: A Robert Parry Reader in exchange for a contribution to Consortium News‘ 2022 Winter Fund Drive. 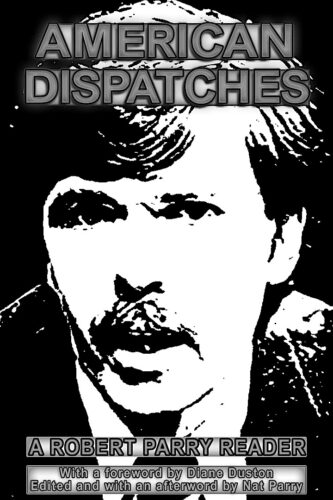 Published this summer, American Dispatches: A Robert Parry Reader is a compilation of the writings of the late Robert Parry, the founder of this site in 1995.  It provides an illuminating history of the late 20th and early 21st centuries – a troubling recent past that Parry meticulously chronicles through in-depth research and compelling storytelling.

The book documents how the deterioration of the U.S. media’s commitment to providing an honest accounting of current events has enabled corruption and wrongdoing at the highest levels of government.

Among the many hard-hitting stories that can be found in the reader:

You can get your courtesy copy of the paperback with a $100 donation to Consortium News‘ 2020 Fall Fund Drive.

Don’t miss this opportunity to help America’s earliest independent news site continue into its 28th year, despite all the efforts to stop us. So please:

← Daniel Ellsberg: Indict Me Too
COP27: A Global COP-Out →