Just after the onset of the war, the Ukrainian government arrested and imprisoned the two communist youth leaders, accusing them of pro-Russian and pro-Belarusian political views. 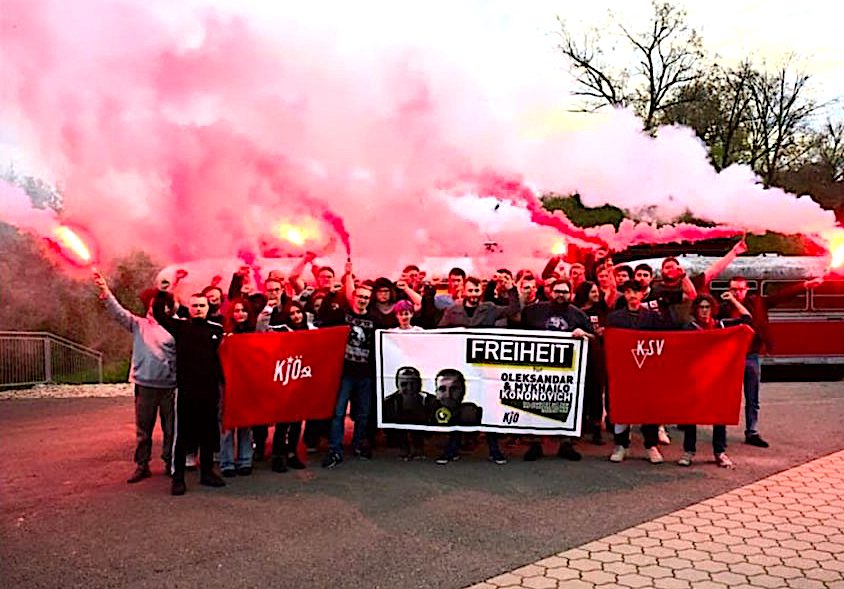 Communist Youth, KJO, and student group KSV protest in Austria calling for the Ukrainian government to release Aleksander Kononovich and his brother Mikhail Kononovich, earlier in November. (Via People’s Dispatch)

The World Federation of Democratic Youth (WFDY) and its federating progressive youth groups across the world have intensified their campaign for the immediate release of Aleksander Kononovich and his brother Mikhail Kononovich, communist youths imprisoned by Ukrainian authorities.

Both the Kononovich brothers belong to the leadership of the Leninist Communist Youth Union of Ukraine (LKSMU), a member organization of the WFDY. The WFDY leadership also demands an end to all deadly, imperialist wars raging across the world.

Nov. 21 marked 260 days since the arrest and imprisonment of the Kononovich brothers by the Security Services of Ukraine (SBU). On Nov. 11, WFDY and its federating youth groups worldwide staged a week-long campaign and held protest demonstrations in front of Ukrainian embassies in various countries demanding the release of the Kononovich brothers.

Today marks 250 days since Communist youth leaders Mikhail and Aleksander Kononovich were arrested by Ukrainian secret police. In the months since, they've been brutally tortured in detention.

We join in the international calls for their IMMEDIATE release! #FreeKononovich pic.twitter.com/TLhKWzCJxL

After the beginning of Russian military action in Ukraine in February, the SBU arrested the Kononovich brothers in the capital Kiev on March 6 and put them in jail. The SBU accused them of being propagandists holding pro-Russian and pro-Belarusian views with the goal of destabilizing the internal situation in Ukraine and creating the “necessary information picture” for Russian and Belarusian channels.

Even before the war began, the post-Euromaidan regime in Ukraine had started decommunization attempts and persecuting communists. The Communist Party of Ukraine (KPU) led by Petro Symonenko was banned from contesting elections. 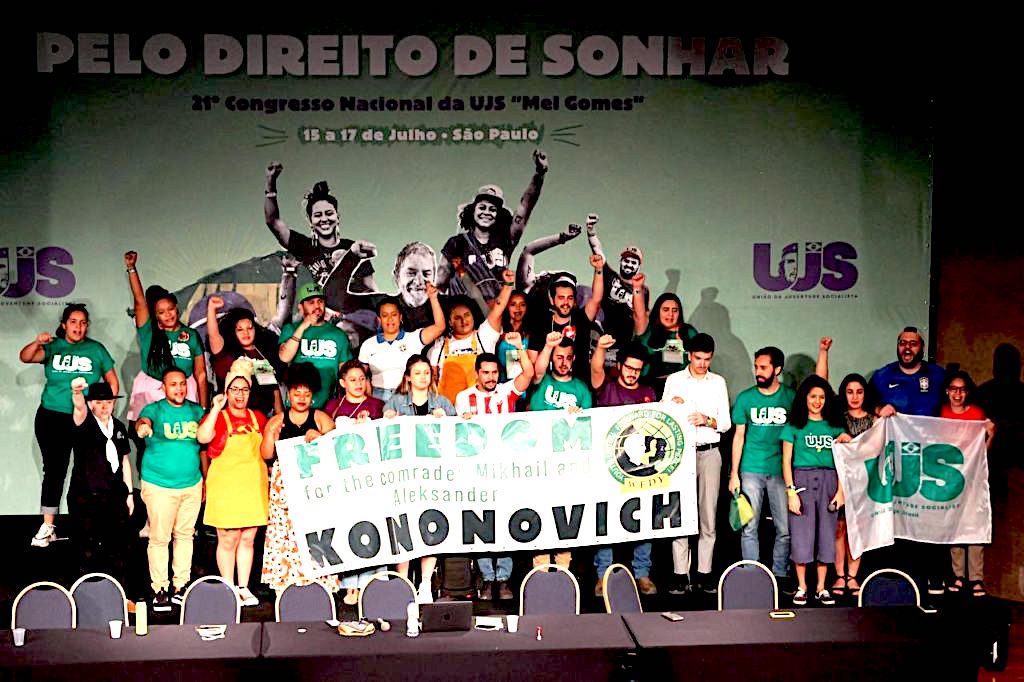 Conference of the Socialist Youth Union in Brazil. (Via WFDY)

Its publication Rabochaya Gazeta was also banned, and its members, as well as the senior leadership, faced police repression and assaults from far-right groups.

Braving all these difficulties, members of the KPU and LKSMU continued to organize protests against decommunization, pro-corporate land reforms, government support for neo-Nazi groups, rise in electricity and water prices and NATO expansionism.

They also organized campaigns urging the peaceful resolution of the Russia-Ukraine conflict.

The Eighth Administrative Court of Appeal in Lviv, Ukraine, ruled on July 5 to uphold the ban on KPU and ordered the state to seize the properties of the party. 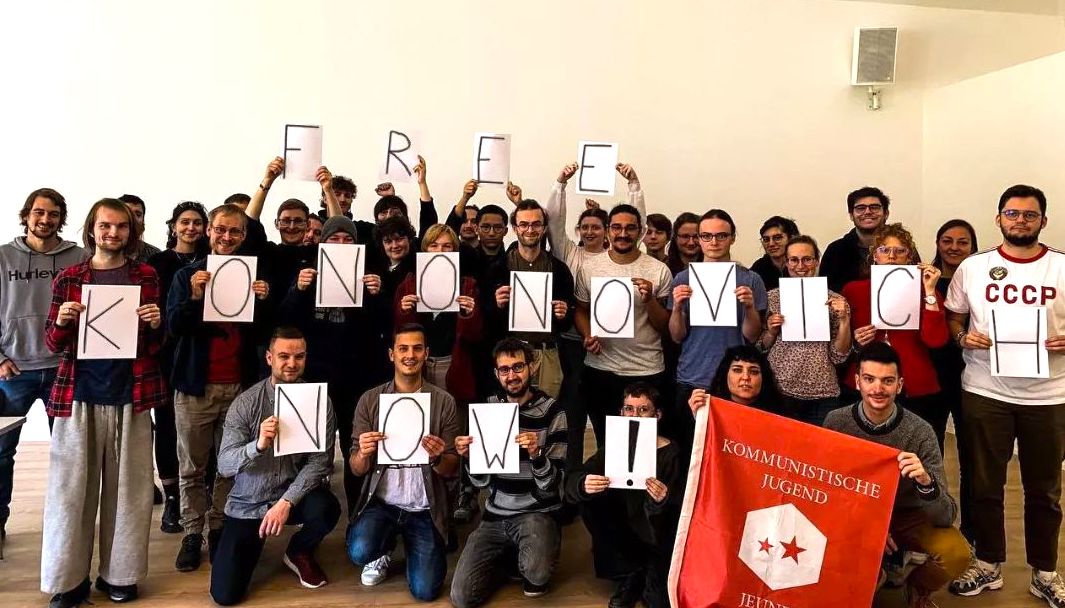 According to reports, in their trial in the Solomensky District Court of Kiev which began on July 1, the Kononovich brothers stated that “our case is completely fabricated from start to finish. What are we charged with? Pro-Belarussian views are being charged. We are being tried for our views. What kind of democracy can we talk about?” 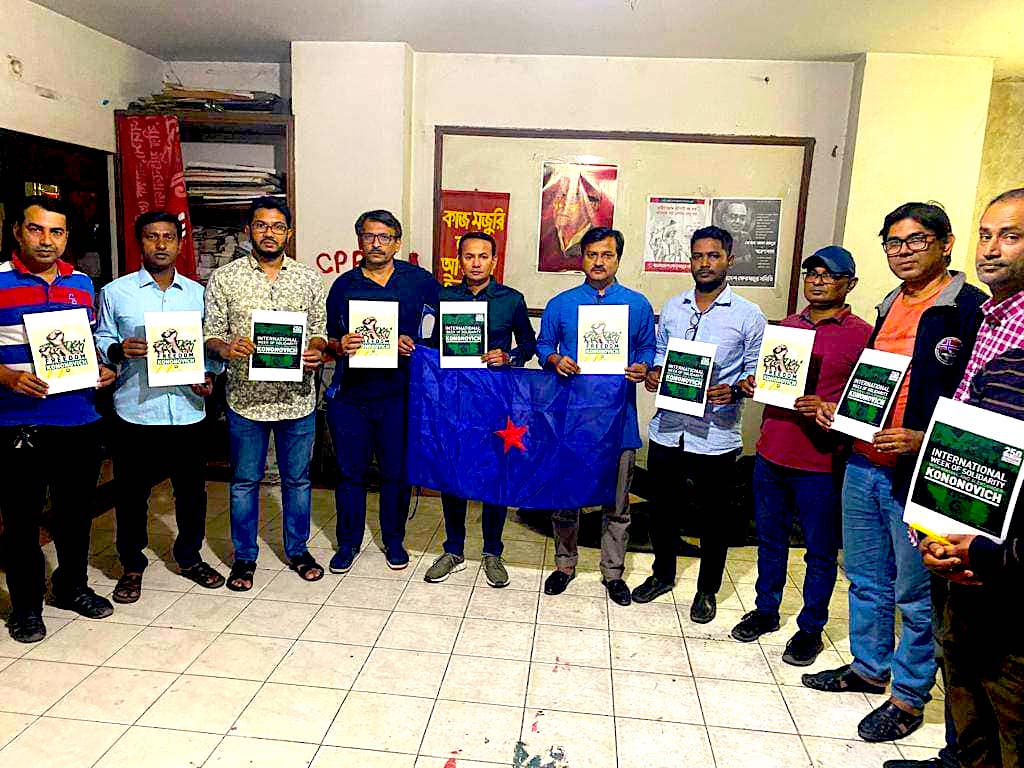 “the arrest of the Kononovich brothers based on false accusations on posts on social media was a new step of the political persecution against the communists and anti-imperialists in Ukraine. For the anti-imperialist youth, this is, for the World Federation of Democratic Youth, solidarity with Mikhail and Aleksander Kononovich has been a priority since they were kidnapped. That is why we have explored all possible ways to prevent them from being assassinated, stop the torture, put an end to the violation of their rights and obtain their release.”

According to Aritz, WFDY has taken several actions for the release of the Kononovichs, including diplomatic moves so that Ukrainian institutions felt international pressure, “although it is true that they have not been the central nucleus of the struggle.” 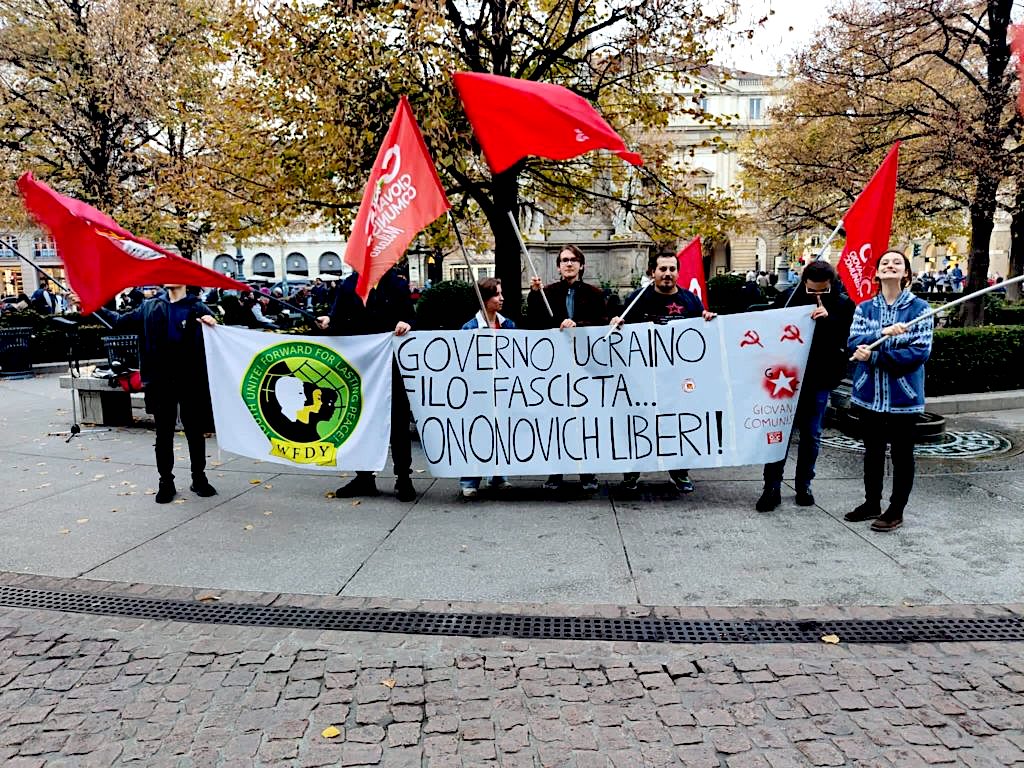 Cadres of Giovani Comunisti/e in Italy demonstrate in front of the Ukrainian consulate in Milan for the release of Aleksander and Mikhail Kononovich. (Via GC Milan)

Secondly, legal support to be able to avoid the continuous violations of their right to defense has been important to monitor their legal situation, the reasons for the arrest and how to proceed to defend their rights. 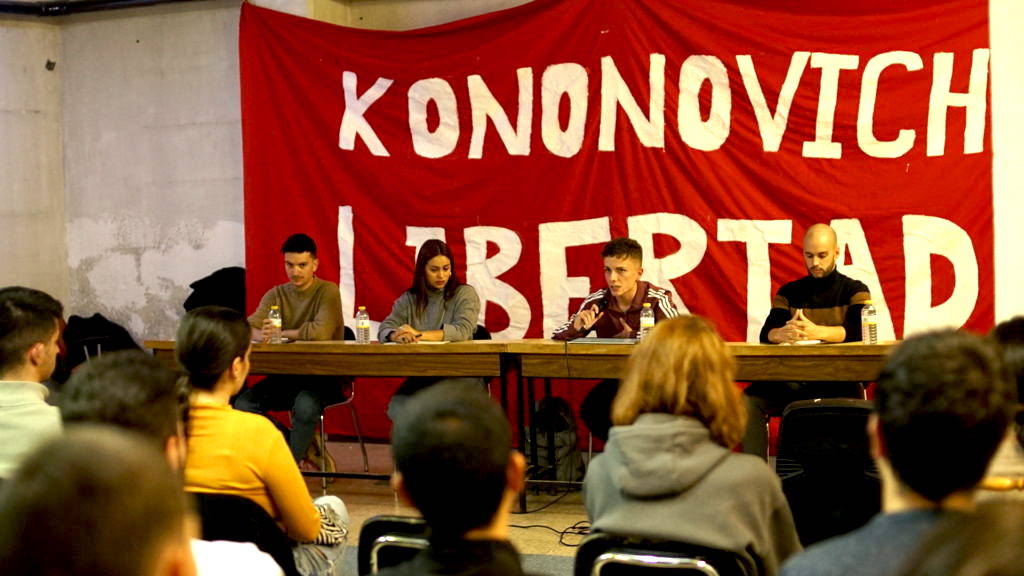 Thirdly, individual pressure has also been key to pressuring Ukrainian institutions, such as sending letters and mass petitions to Ukrainian embassies demanding information about the status of Mikhail and Aleksander and their immediate release, as well as actions on social networks to amplify solidarity.

Lastly, popular mobilization has manifested itself in different ways including mobilizations in front of the Ukrainian embassies in different countries. The slogan “free Kononovichs” was widespread in the demonstration against NATO’s June summit in Madrid; banners demanding their release were displayed in football matches in which the national team of Ukraine played. Activists launched an International Solidarity Week to mark 250 days since their kidnapping.

Dozens of youth organizations from across the world joined the call for their release and continue to organize various social media campaigns. 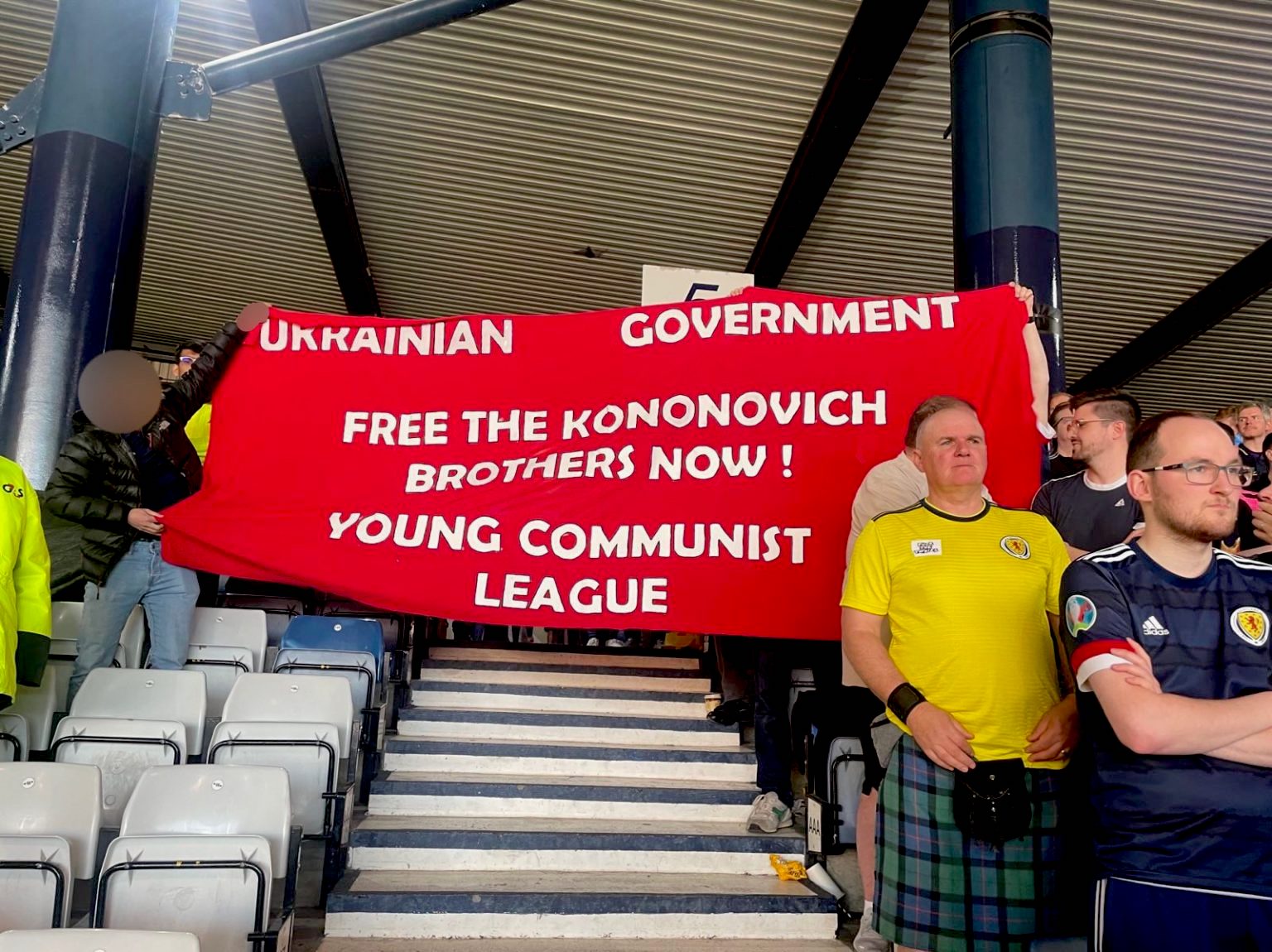 “In the words of the Kononovich brothers themselves, these actions have been crucial to avoiding assassination at the hands of the Ukrainian reactionaries and to delaying and making clear the political character of the trial for their communist and anti-imperialist militancy. This is a great example of the potential of the internationalist struggle. This must be an example to reinforce our anti- imperialist struggle,” said WFDY President Aritz. 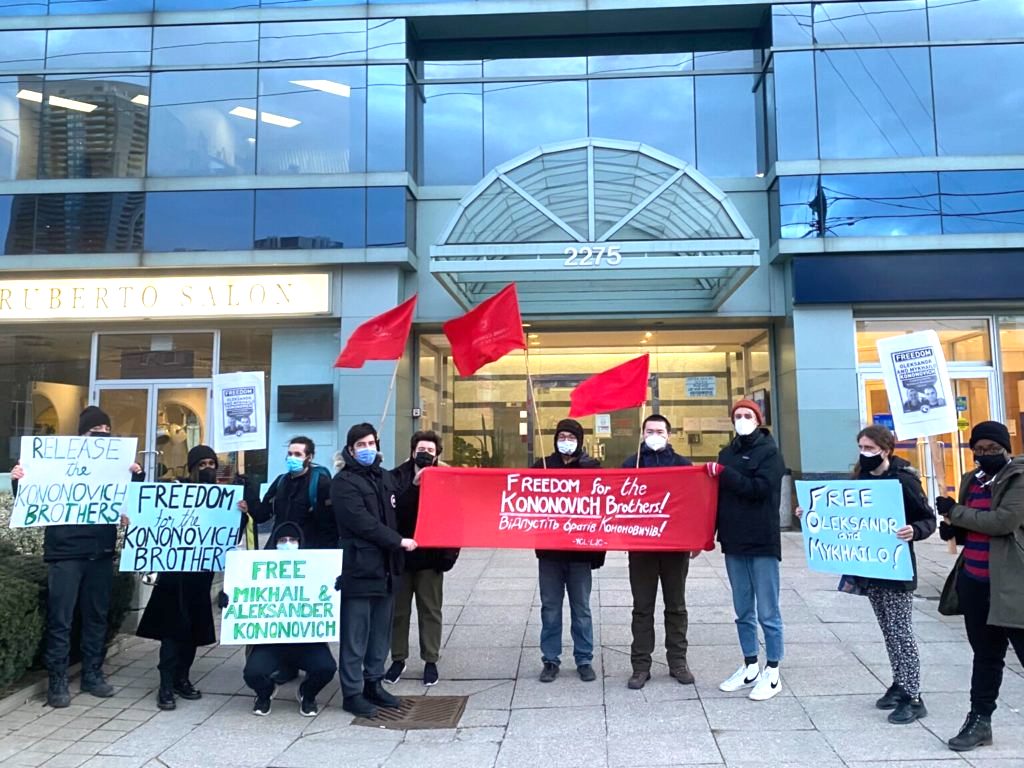 Cadres of Young Communist League of Canada, YCL-LJC, in Toronto. (Via Rebel Youth)

Regarding the persecution of communists in Ukraine, Mikhail Kononovich told Peoples Dispatch in an interview in February 2021,

“I emphasize that in the communist ideology, the idea cannot be banned by any laws, so it is impossible to ban common sense and science. It is simply impossible to ban the Communist Party of Ukraine (KPU), because we are a party with more than a hundred years of history, a party that has an experience of underground struggles. We communists have fought and will continue to fight for the benefit of our people!”