The Scottish Prisons Service ignores the rules set by Scottish Parliament and is a law unto itself. 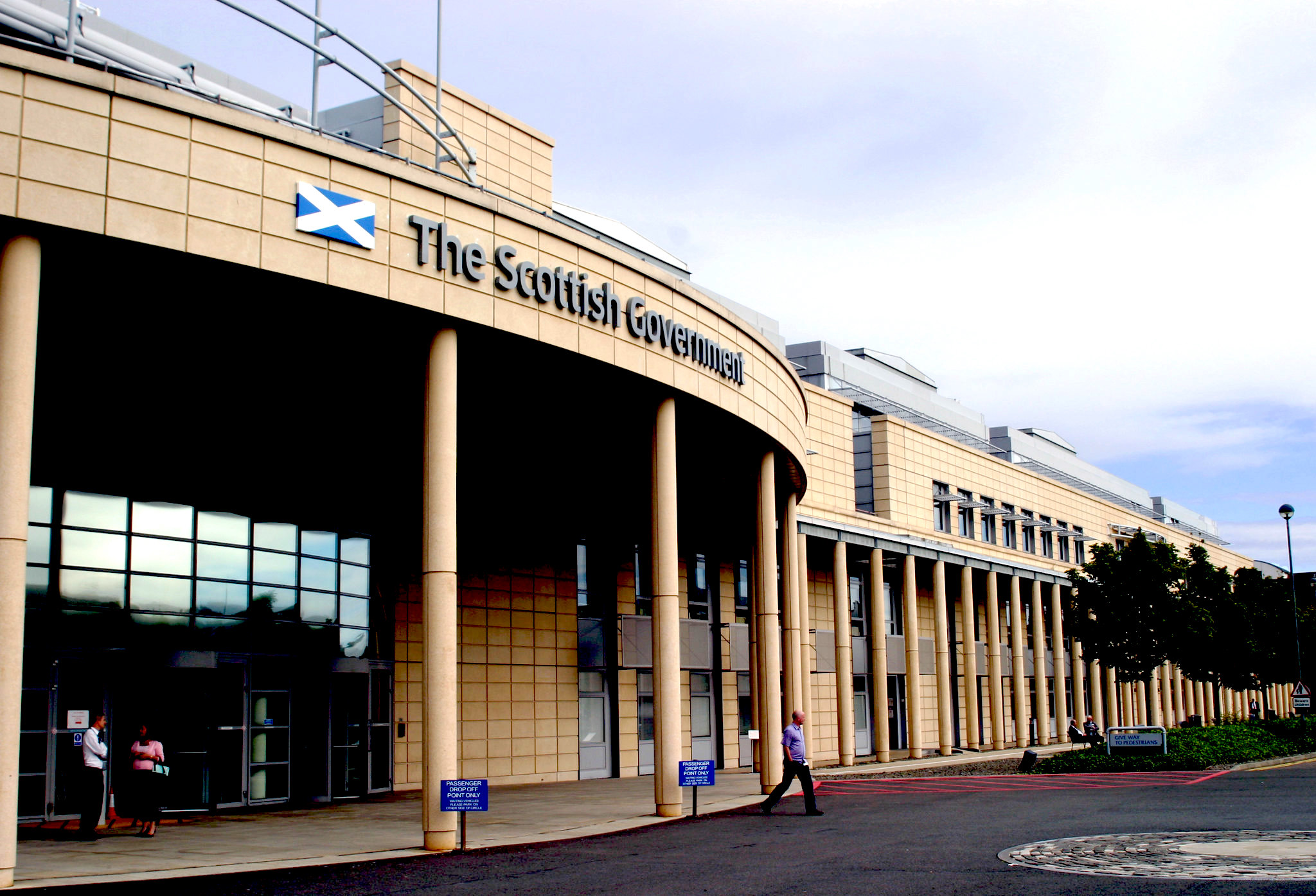 The Scottish Parliament is under the untrue impression that Scottish prisons are run under the fairly liberal Prisons and Young Offenders Institutions (Scotland) Rules 2011 laid before parliament by Justice Secretary Kenny MacAskill MP on Sept. 14, 2011.

In fact, the Scottish Prisons Service totally ignores them and is absolutely a law unto itself.

I intend to prove this to you. Let me start with a very basic rule: the availability of the rules to prisoners. This is plainly set out in the rules themselves.

This was specifically continued in the Covid update: 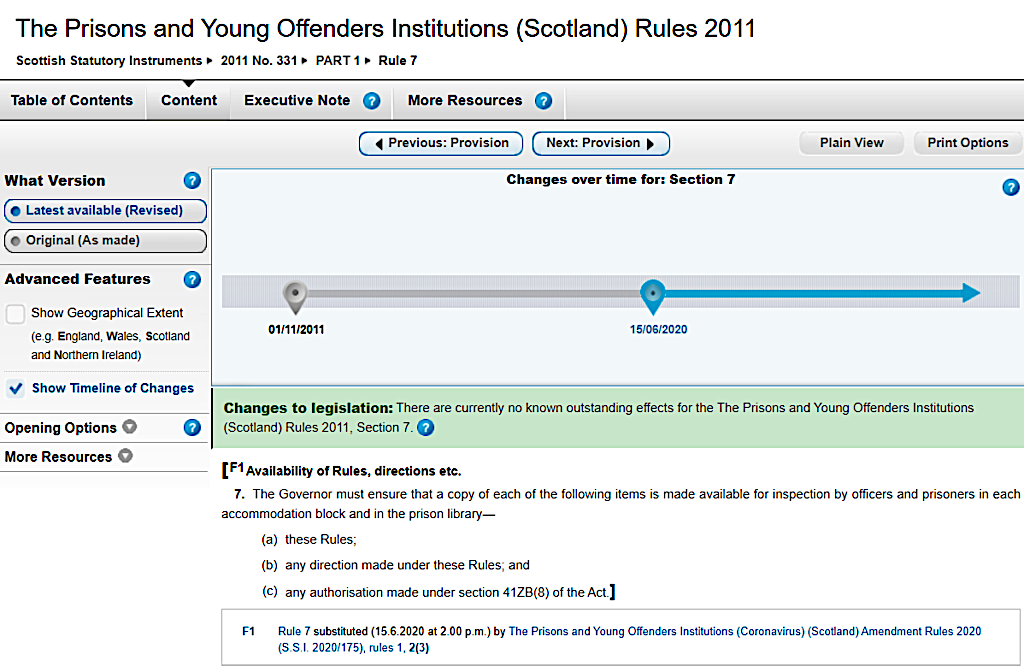 This law — and it is a law — is deliberately ignored by the prison authorities. On entering the prison, I was asked to wear prison uniform. I had been told by my lawyers that civil and remand prisoners have the right to wear their own clothing. I therefore asked to see the prison rules.

Prisoners have no internet access, but I had asked my lawyers to send me a copy of the rules and they eventually arrived, including many documents of amendments. I then took up the matter of wearing my own clothing. This is very important because it affected a third of the prisoners in Saughton, who were on remand — “untried” in official parlance. 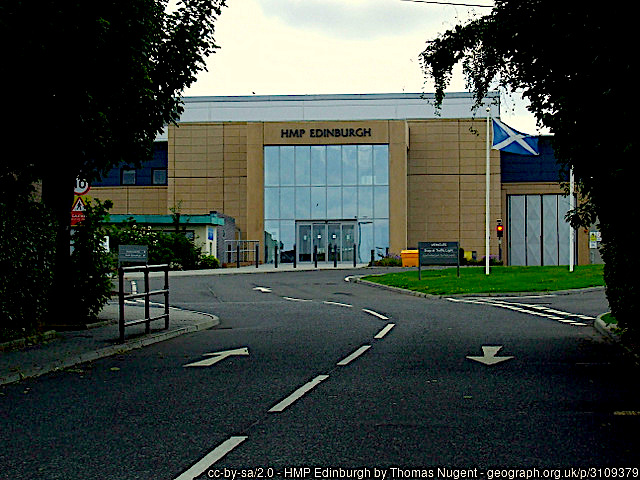 It also mattered to me because it was upsetting for my family when visiting to see me in prison clothing. Avoiding this indignity is precisely why civil and untried prisoners — who are entitled to the presumption of innocence — have for centuries been entitled to their own clothing.

Continuation of that centuries’ old tradition, except in unusual circumstances, is undoubtedly what the Scottish Parliament believed was being laid before them here: 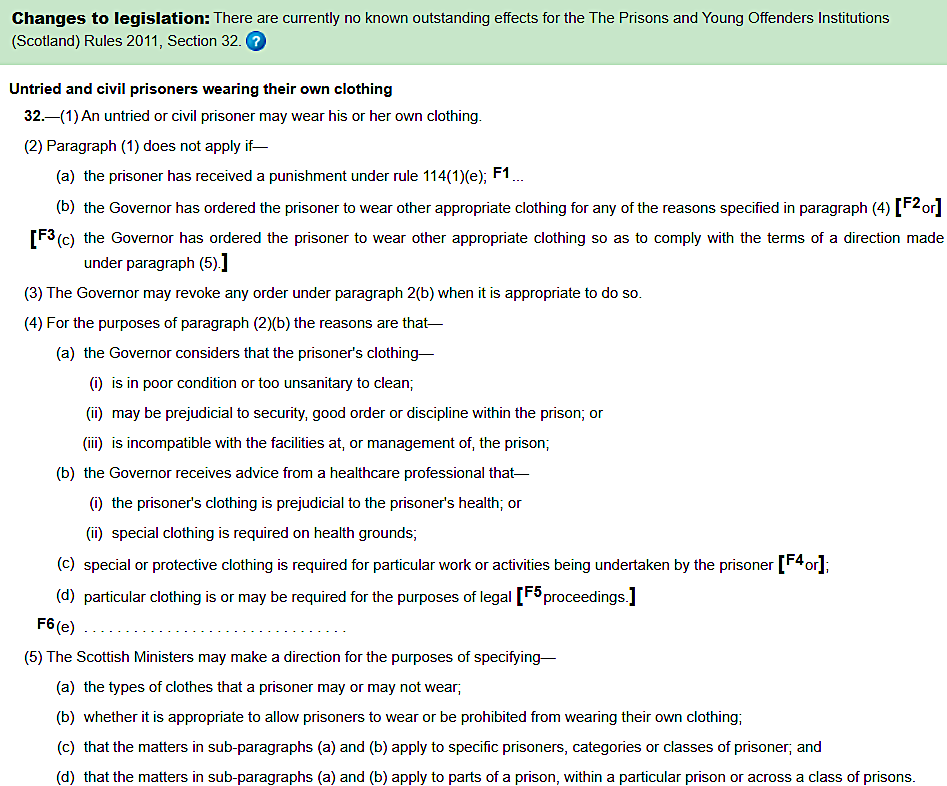 But the Scottish Prisons Service completely ignores the right, established here in law, for civil and untried prisoners to wear their own clothing, claiming that it only applies inside the prison cell (which appears nowhere in the legislation).

I actually took this issue through the complaints process in the prison, to a prison tribunal of three prison officers held on Aug. 30, 2021, the result of which was that the tribunal claimed that under para 32 (4) the Governor had the right to instruct civil and remand prisoners to wear prison clothing for the security and management of the prison.

I pointed out that those provisions are clearly meant to apply to any problematic qualities of the particular clothing of an individual prisoner and that 32 (4) could not be intended to abolish the entire right that it qualified. Also, 32 (5) plainly reserved to Scottish ministers the power to make any more general cancellation of the right for whole classes of the prison population.

No Scottish minister has ever canceled the right of civil and remand prisoners to wear their own clothes. The Scottish Prisons Service has simply done it contrary to the law laid before Parliament. 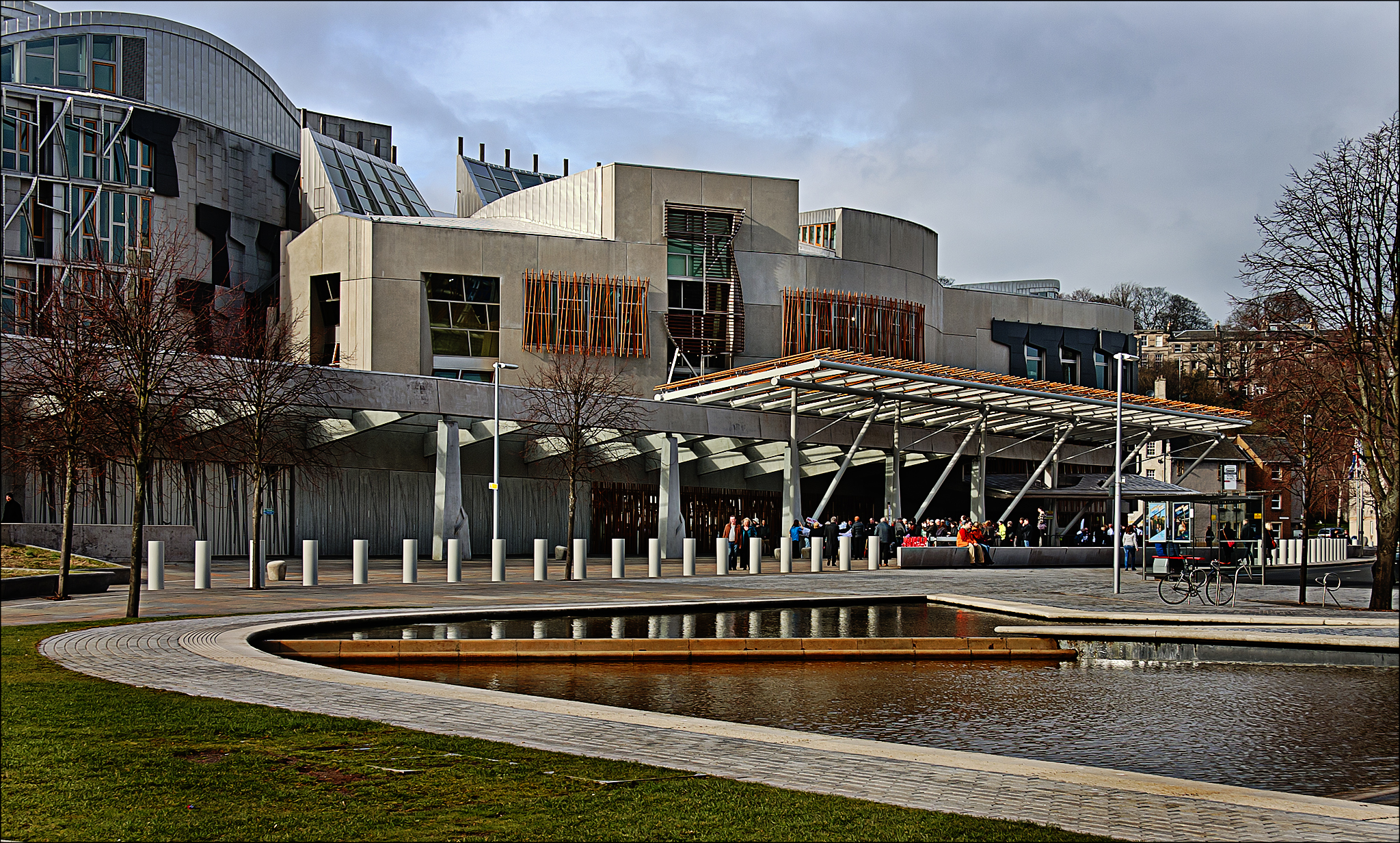 This meant nothing to the prison staff forming the tribunal. They did not, at the tribunal, have a copy of the “The Prisons and Young Offenders Institutions (Scotland) Rules 2011” available to them either.

Rights which Parliament believes to have been granted to prisoners are again and again severely circumscribed by the Scottish Prison Service. 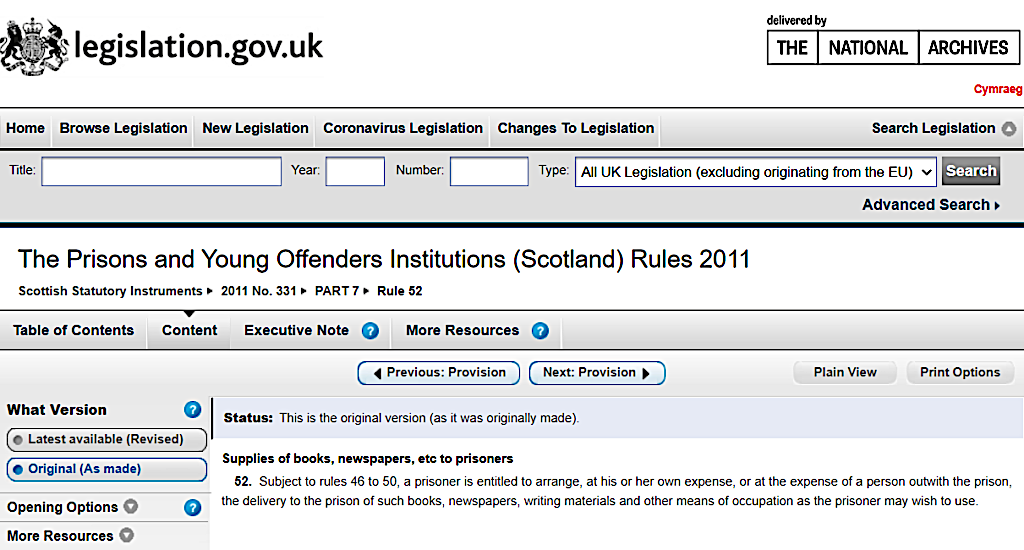 The right to have books is circumscribed in Saughton jail by a rule that prisoners may only have books purchased and sent direct from Blackwell’s in Oxford. “Other means of amusement” is circumscribed to a very small list of articles but only if they are purchased through the prison, at a much higher price than commercially.

I bought from the jail an Akai radio for the eye-watering price of £34.95. It took seven weeks to arrive. You can buy a Playstation from the jail, or a choice of just three jigsaws, but you cannot buy a chess set. When you are locked in your cell for 23 hours a day, these things are very important.

The right to correspondence in para 54 of the prison rules is circumscribed by strict arbitrary limitations set by the prison governor on the number of stamps you may purchase.

The right to use the telephone at para 62 is circumscribed by the stipulation that you may only call a list of phone numbers you must register in advance. So, if you need unexpectedly to talk to your children’s school or to the taxman, for example, you cannot do it.

In short, the prisoners’ rights contained in the law are systematically reduced, again and again and again, by the Scottish Prison Service. Sometimes this is probably legal, using provisions related to security in the prison rules, at other times it appears simply illegal, as in denying the right for civil and remand prisoners to wear their own clothing.

What is plain is that the Scottish Prison Service cares not one jot for the legal framework under which it is supposed to operate, either in letter or in spirit. 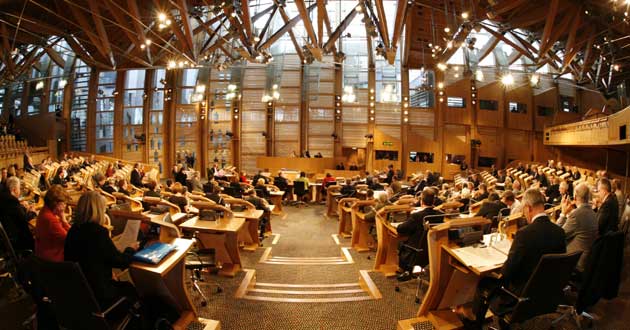 How has this situation arisen? Well, the most important factor is complete neglect by ministers and a lack of any political control over the Scottish Prisons Service.

Following the excellent MacAskill, who established the legislation, Scotland has had two total duds as justice minister – firstly Humza Yusuf, who is lazy and feckless, and then Keith Brown, who is lazy and stupid. The Scottish Prison Service has therefore been able to do what it likes.

The second problem is that there is nobody to stand up for the rights of prisoners. As I explain in the first two parts of my prison memoir, the large majority of the prison population have come from lives of deprivation, institutionalisation and addiction. They are not conscious of their rights.

[See: Craig Murray: Your Man in Saughton Jail, and Part 2]

Most prisoners are dependent on legal aid for their legal representation —which is often peremptory at best as the entire system is straining to breaking point.

There is no legal aid available for bringing cases on prison conditions. All the actors — prisoners, their lawyers and prison staff — are imbued by the same sense of hopelessness and absolute cynicism.

Those managing the prison have, on a day-to-day basis, two overriding priorities to which everything else is subordinated. The first is reducing the flow of drugs into the jail. The second is keeping different classes of prisoners separate.

Therefore prisoners’ access to stamps — and thus their ability to communicate with their friends and family — is limited because allegedly stamps are used as currency inside prison to buy drugs.

Access to books is limited because the pages of books can be impregnated with drugs. For the same reason prisoners are not permitted photographs of their families, which is particularly cruel.

The extraordinary thing is that the banning of anything and everything in the aim of stopping the flow of drugs has no effect whatsoever. Drugs in prison are available with a freedom you cannot believe. Not one day passed of my time in prison when I did not witness drugs passing between prisoners.

Trying to stop the stuff getting in is plainly hopeless. A much more sensible approach would be to look at why people whose basic problem is addiction form the majority of prisoners, when prison does absolutely nothing to cure addiction.

Remand prisoners are not allowed to wear their own clothing because the prison’s priority is the distinction of different classes of prisoners.

Personally, I have my doubts about a system of which the practical effect is to put sexual offenders in maroon so other prisoners know who to kill, but there you are.

The Scottish Prisons Service is not driving a coach and horses through the Prisons and Young Offenders Institutions (Scotland) Rules 2011 legislation out of gratuitous cruelty. It is doing so as it views that as the best way to fulfil its operational plan, and because nobody seems to care enough about prisoners to note that it is illegal.

So, we have a massive dichotomy between what the law says about the governance of Scotland’s prisons, and what actually happens.

I should make plain that I did not suffer, at any stage, from any cruelty or unpleasantness from prison officers (bar one brief and minor incident). I was personally treated with kindness and courtesy, and in view of my status as a civil prisoner a number of Saughton’s practices, for example on books, were altered for me to be more in line with the actual law.

I am writing from concern for those now in jail, and for the highly unsatisfactory situation where the administration of the punitive force of the state is itself carried out illegally.

7 comments for “Craig Murray: Your Man in Saughton Jail Part 3”