On the 100th anniversary today of the 19th Amendment, Victoria W. Wolcott recalls the militant women who elevated a protest tactic still in wide use today.

By Victoria W. Wolcott
University at Buffalo, The State University of New York

Asylum seekers held in detention by Immigration and Customs Enforcement in California have launched a series of hunger strikes to demand personal protective equipment, medical care and provisional release as Covid-19 cases surge among incarcerated populations.

As Americans celebrate the 100th anniversary [on Aug. 26] of the 19th Amendment, which granted women the right to vote in August 1920, these protesters and many others owe a debt of gratitude to the militant suffragists who elevated the hunger strike as a powerful form of protest.

The prison system, as it developed in the second half of the 19th century, rendered prisoners largely invisible to the outside world.

Imprisoned hunger strikers and their supporters outside the prison gates made visible what was invisible. As a historian of American social movements, I have studied the origins of this tactic.

Although there were earlier examples of hunger strikes in early modern Europe and Russia, Marion Dunlop, a British suffragist, carried out the first modern-day hunger strike in 1909 in London’s Holloway Prison.

Dunlop and other suffragists sought public sympathy when they refused to eat, playing on popular ideas that white female bodies were vulnerable and passive. Hunger strikers made their starving bodies a form of speech that could breach prison walls through testimonials, picketing and protests.

That sympathy increased when suffragists like Dunlop were routinely subjected to brutal force-feedings. Initially devised to feed patients in asylums, force-feeding often damaged suffragists’ teeth, gums and throat. In some cases, when food went into lungs, it even resulted in pneumonia.

One suffragist, Mary Leigh, who was forcibly fed in 1909 after her arrest protesting for women’s suffrage, recalled the horror of the experience. She wrote: “The sensation is most painful – the drums of the ear seem to be bursting, a horrible pain in the throat and the breast. The tube is pushed down 20 inches … I resist and am overcome.”

Suffragists argued that their rough handling and force-feeding revealed the brutality of the government. After their release, Dunlop, Leigh and others wrote prison narratives and spoke at rallies to encourage other women to follow their example and join the movement. 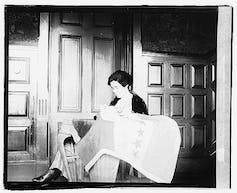 These narratives soon reached American ears, and by the 1910s some American suffragists adopted the more militant British tactics, rather than the lobbying and polite protests of earlier decades. They were led by Alice Paul, the author of the Equal Rights Amendment, who had spent time in England learning from her British counterparts.

When arrested for offenses such as obstructing traffic during demonstrations or chaining themselves to the White House fence, suffragists began their own hunger strikes. They too were forcibly fed.

Perhaps the most spectacular attempt to bring publicity to the hunger strikers was undertaken by American journalist Djuna Barnes. In 1914 Barnes staged a forcible feeding to demonstrate the brutality of the process. The staged event was covered by New York World Magazine and both horrified and fascinated readers.

Photographs of her experience appeared beside her article in which she stated that she “shared the greatest experience of the bravest of my sex.”

This form of performative journalism brought the spectacle of physical punishment outside the prison walls to the American public.

Suffragists directly influenced the use of the hunger strike by British colonial subjects in Ireland and India. When Marion Dunlop was released from prison after her hunger strike in 1909, she gave a public speech attended by a visiting Indian lawyer, Mohandas Karamchand Gandhi.

Male Irish Republicans employed hunger strikes after the 1916 Easter Rising against British rule – some four years after female suffragists in the country employed the same tactic. The Republican men, however, did not acknowledge the precedent set by women.

Gandhi on hunger strike in 1933. (Keystone-France/Gamma-Keystone via Getty Images)

In the West, Gandhi’s emaciated and frail body came to symbolize the spectacle of a colonized India seeking its freedom through nonviolence. In the United States, civil rights activists like Bayard Rustin began using Gandhi’s tactic of nonviolent direct action by the early 1940s.

During World War II, Rustin and other male pacifists served in Civilian Public Service camps, which offered an alternative to military service, or, in some cases, in prison. Imprisoned pacifists launched hunger strikes to protest racial segregation and mistreatment. Many of the pacifists suffered painful force-feeding by prison authorities.

An African American women, Eroseanna Robinson, exemplifies this trend. She was a member of the Peacemakers, a radical pacifist organization that practiced civil disobedience and tax refusal and took to hunger strikes when in jail.

In 1960, when Robinson was arrested for not paying her taxes, she practiced total noncompliance and refused to submit to what she perceived as undemocratic and coercive power. During her year of imprisonment, Robinson refused all nourishment and suffered painful force-feedings.

Robinson’s ability to control her own body through self-discipline gave her the strength she needed to endure months of fasting and force-feeding. And as in the case of the suffragists, Robinson’s defiance revealed the brutality of the state.

Pacifists and civil rights activists who engaged in hunger strikes were directly indebted to the suffragists who had preceded them. These activists used their bodies to subvert the prison system.

Today, prisoners and those fighting for racial justice are attempting much the same to bring attention and a measure of justice to the suffering world.

Victoria W. Wolcott is professor of history at University at Buffalo, The State University of New York.