The first atomic bomb burst at 8:15 a.m. over the city of Hiroshima leaving its impression on a watch that disappeared 44 years later, reports Joe Lauria.

On the 70th anniversary of the atomic bombing of Hiroshima, Joe Lauria told the story of Akiko Mikamo and her father Shinji, who was just 15 football fields away from the epicenter of the blast.  This is as much a story about Shinji’s survival–he is still alive today at 94–as of an artifact he retrieved from the rubble. Lauria wrote versions of this story for The Wall Street Journal and the Cape Times in South Africa. We reprint his account published at The Huffington Post five years ago today. 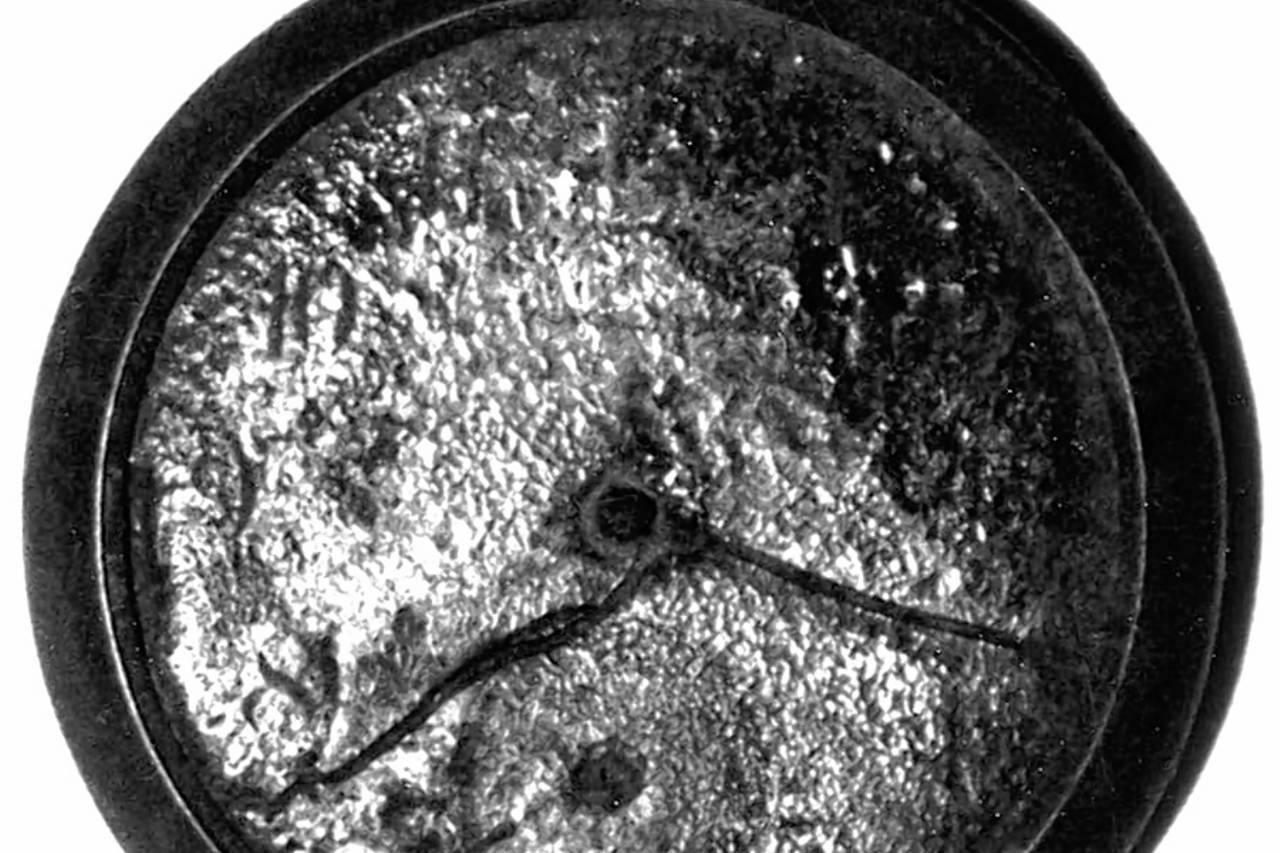 His skin partly melted, a gash in his leg and unable to fully open his eyes, Shinji and his wounded father roamed the pulverized city, stumbling over corpses and some still writhing bodies to seek relief in the Kyobashi River. They were two of the few survivors from so near Ground Zero.

After they wandered to an intact Buddhist shrine where Japanese soldiers threatened them, his father, willing them both to survive, inexplicably inched them back to their house to find only rubble, according to Shinji’s account in a book written by his daughter, Akiko Mikamo.

The 19-year old Shinji was then sent to a makeshift military hospital in the Hiroshima delta, separating him from his injured father.

Three months later, Shinji could walk again. He went back to where his house stood. Digging through the debris he saw another flash. It was the sun reflecting on an object: his father’s silver pocket watch.

“At that moment, my father knew his father was dead,” Akiko said. “Something about the watch told him that. He burst into tears on the site with the watch in his hand. Now, he was really on his own.”

The watch had been given to Shinji’s grandfather for his work as a photographer who took portraits of the Emperor. 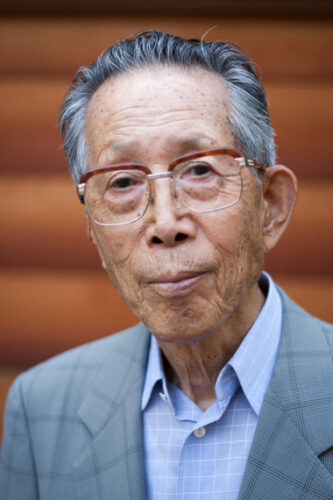 The watch’s hands had been blown off. But the heat of the blast embossed the hands’ image on the face in the permanent position of 8:15. [8:15 is the title of the second edition of his daughter Akiko’s book.]

There are many watches and clocks from Hiroshima with their hands frozen to mark the moment the first nuclear weapon was used. But Akiko believes Shinji’s is likely the only one that lost its hands, but can still be read.

In 1955 Shinji donated the watch to the then new Hiroshima Peace Memorial Museum. It was the single memento of his family from the days before the atomic bomb destroyed his city. His stepmother had died just before the bombing and his brother was killed in action in the Philippines. He had no one left.

“I’d held the watch close, thinking of my father and his bravery,” Shinji says in Akiko’s account. “I was ready to let go of this only keepsake I had of my father … as a reminder of both the destruction and the heroism that were displayed that fateful day.”

Despite its deep meaning for him, in 1985 Shinji allowed the museum to loan the watch with other items for a permanent Hiroshima-Nagasaki exhibit inside United Nations Headquarters in New York. He wanted people from around the world to see what a nuclear weapon could do.

With the watch, were fused coins; shreds of a child’s school uniform; tin cans melted together and a pockmarked statue from a Nagasaki church. They were displayed in a glass case outside the General Assembly hall. 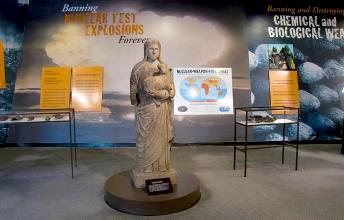 Hiroshima-Nagasaki exhibit at UN Headquarters. St. Agnes statue from the cathedral Urakami Tenshudo in Nagasaki found in the church ruins after the nuclear attack. (UN Photo)

When Shinji’s daughter Akiko in May 1989 moved to the United States for graduate work in psychology she went straight to U.N. headquarters.

She had only seen the watch once at the Hiroshima museum many years earlier. Akiko joined the paid tour and went through the building waiting to get to the exhibit. She told the tour guide she’d come to see her father’s watch.

“Almost pulling my hand, he said, ‘Oh, that is the most famous item. Many people are deeply moved by it and ask me a lot of questions,’” Akiko told me. “‘Here, I’ll show you where it is.’” When she arrived at the display case she saw a label describing the watch.

But the watch was gone.

The tour guide was as astonished as she was. “I just saw it!” he told Akiko. “It was here!” U.N. authorities in short order told them the watch had been stolen.

Distraught, she immediately called her father in Hiroshima from a U.N. phone booth. Akiko says Shinji told her that it was only an object and that “when you lose something you gain something.”

When the stolen watch became known in Japan, Shinji unexpectedly heard from relatives he did not know he had. From them he was able to trace his family back to their roots as feudal lords in the 15th Century.

“For the first time since the war I was no longer a street rat, an orphan without family connections,” Akiko quotes her father saying. “Getting the pocket watch stolen turned out to be a blessing.” 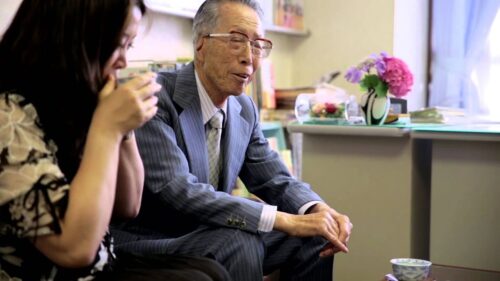 Though he was the victim of one of the two greatest single-event war crimes in history, Nagasaki being the other, Shinji forgave the United States early on. He said he even forgave Paul Tibetts, the pilot of the Enola Gay.

But apparently lots of Americans have still not forgiven the Japanese. Now a multicultural clinical psychologist in San Diego, Akiko gives lectures around the country and abroad about her father and the importance of understanding other cultures in order to forgive.

She says many Americans at these lectures tell her to her face that the Japanese deserved it because they were the aggressors at Pearl Harbor. That both the Japanese (especially in China) and the U.S. could have both committed war crimes is still a concept too difficult it seems for many people to grasp.

Meanwhile, the U.N. did not appear very bothered about the missing watch. It took four months to write a letter of apology to Shinji and to the Japanese authorities. The theft had only been announced to the press on Sept. 29, 1989, four months after it was discovered stolen.

“It was a matter of losing face because someone trusted the U.N. for a permanent exhibit of war history and eventually it was stolen, so it was a very shameful event for the U.N.,” Shin Kurobe, a retired U.N. administrator, told me from his home in Japan.

The letter to Shinji says the U.N. continues its “investigation of this despicable act and the case remains open and active.”

But 26 years later, no one at the U.N. seems to remember anything about the watch. Three long-time U.N. officials never heard the story. And neither did anyone in the U.N. security department. But officers there became intrigued and enthusiastically searched for the case file.

Having failed to find anything, they surmised that the files may have been among those destroyed when Hurricane Sandy flooded the U.N. basement in 2012. 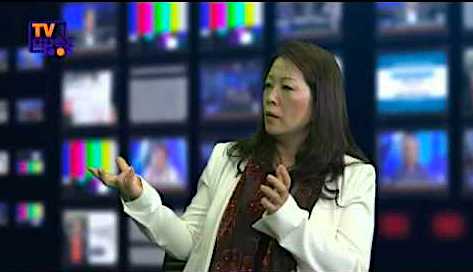 The theft may have been part of a ring organized inside the U.N., but no one knows for sure. A year and a half before the watch was stolen, a silver coffee urn and two, 21-karat, solid gold bottles containing a rare perfume, a gift to the U.N. by the government of Oman, were stolen from a glass case yards from the Security Council chamber.

Farhan Haq, deputy spokesman for the Secretary General, told me:

“We continue to regret that a heat-fused watch from Hiroshima was apparently stolen from its U.N. display case. After all this time, we still do not know what happened to the watch, and we continue to see this as a great loss to all the visitors to the U.N., including the schoolchildren who could learn much about the scourge of nuclear weapons. We take all such incidents very seriously and try to investigate them.”

But Akiko is convinced that the theft was an inside job and that no serious investigation was ever carried out.

Akiko says she would welcome any move by the U.N. to reactivate the investigation. “But my own focus is spreading the message for peace,” she said, “so I would like as many people from all over the world to learn about the watch and learn about my family’s story of survival and forgiveness from Hiroshima.”

4 comments for “ATOMIC BOMBINGS AT 75: When Time Stopped in Hiroshima—and When it Was Stolen”