The Establishment creates wars and quagmires that require people of integrity, courage, and nobility to waste their talents saving people whom the Establishment assigns to the role of cannon-fodder, writes Vladimir Golstein.

For better or for worse, the Romantic Age was the last age of heroes. Yes, we might dismiss these Byronic Loners as idealistic, misanthropic, sexist, or adolescent, but they were heroes, nevertheless.

Since then literature has produced only “anti-heroes” in the style of Dostoevsky’s underground man: self-aware, insecure, cerebral, paranoid, incapable of action and so on.

One of the best renditions of the Romantic Hero was Mikhail Yuryevich Lermontov’s Pechorin, the protagonist of the novel, A Hero of Our Time, published in 1840. Pechorin is cool and confident and strong and courageous. He also lives by his own principles. 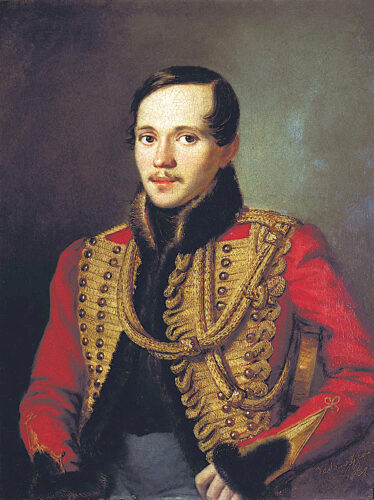 Lermontov portrait (1837) in the Tretyakov Gallery in Moscow. (Wikimedia Commons)

They are not necessarily informed by high morality or social mores, but they are his own, and he tries to live by them. Most of these principles go back to the age of chivalry. You can kill your rival, but in an honest duel. You can seduce a maiden, but not because you want to brag about it or mock and humiliate her, but because you fell in love.

What authors like Lermontov felt and exposed well is that the modern age lacks all of that. We have petty nasty people who want to win by cheating, not by being the best or the coolest in an honest competition. It is Tonya Harding’s world, in other words.

Pechorin has an admirable formula. I don’t want to be a slave: I was not born for that, nor do I want to be a master — it is too fussy and petty.

What is fascinating about the Byronic Hero, is that interest in him arises in times when societies are going through some soul searching. When it looks around and sees only yes men, corporate men, people without any honor or principles, people for whom winning is everything.

When the Soviets got disappointed with petty apparatchiks capable only of empty sloganeering, they created the film, White Sun of the Desert, which actually has two Pechorin type characters. When Russians became disappointed with post-Perestroika lawlessness, they created the film Brother, which consciously refers to Lermontov and his novel. Lermontov is very much alive in Russian consciousness.

American Westerns are a film form that clearly continued this tradition of a Byronic hero. A hero of Westerns listens only to his own drummer. He does not like the corrupt town leaders and their pettiness, nor does he like nasty bandits who want to torture, humiliate, and abuse.

One of the great period of Westerns was during the 1960s and 70s, when society was pretty disappointed with itself as the result of the Vietnam war and other counterculture discoveries. The self-reliant loner who obeys rules that he sets for himself became a hero again.

In comes a great director of Westerns, Sam Peckinpah, and transports a tough as nails hero of that genre into a soldier of the Wehrmacht, fighting Russians near Crimea in the 1977 film Cross of Iron. Sergeant Rolf Steiner, the protagonist, is played by a familiar Western actor, James Coburn, who has very few principles, but is willing to die and kill for them. He despises career-driven officers, who hide in headquarters and then expect Iron Crosses. He has nothing but contempt for ideology. He mocks empty rhetoric and can’t stand abuse or unnecessary violence.

Why is he fighting and risking his life every day then? He just can’t let his men be abandoned and left to die. He wants to stay with them, alive or dead. But he expects the same from them. When one of his guys brutally rapes a Russian nurse, he throws the guy to the surviving nurses and tells them that he is theirs. He saves a captured Russian boy and protects him from a nasty careerist who said that the new order is to shoot prisoners.

In another scene, Steiner stares down and ignores a nasty scoundrel of an officer who uses all the imaginary lies and intrigues along with his aristocratic name to get ahead and terrorize those who do not obey him.

Is the film anti-war? You bet it is. But more precise, it is anti-Establishment. The Establishment is made up of institutions that create wars and other quagmires, which then requires people of integrity, courage, and nobility like Steiner to waste their talents on saving people whom the Establishment has assigned to the role of cannon-fodder.

Coburn’s Steiner, or Lermontov’s Pechorin are the rivals and enemies that one dreams of having. They can beat you, but only in open confrontation, and only because they are cooler, smarter, faster, or better trained. But not because they will cheat you, or betray you, or use some lie, innuendo or denunciation.

The nihilistic seventies were followed by euphoria connected with the collapse of the Soviet Union, and a new confidence in so called Western Values. Nihilists like Steiner or Pechorin went out of fashion. Just follow the orders, climb your corporate ladder, vote for Democracy and capitalism and you’ll be fine.

Well, I suspect, that since most societies end up being corrupt and cynical, there is always a time for a Byronic hero. Maybe in today’s day and age, they’ll take the form of Thelma and Louise, but these heroes are as inevitable as they are inimitable. And they are needed now more than ever.

Vladimir Golstein, a former associate professor at Yale University, manages the Department of Slavic Studies at Brown University and is a commentator on Russian affairs. He is the author of Lermontov’s Narratives of Heroism, published by Northwestern University Press (1999).

11 comments for “An Age in Need of Heroes”