Aaron Maté reports on John Bolton’s controversial new book and finds that Bolton would have had little evidence to present had he testified at Trump’s impeachment hearing.

In late January, John Bolton became the latest – and unlikeliest – official to enjoy a moment of Resistance glory. A New York Times report about Bolton’s forthcoming memoir fueled round-the-clock expectations that the former national security adviser would substantiate the core allegation at the heart of President Trump’s then-ongoing Senate impeachment trial – that the president tried to coerce Ukraine into opening an investigation of Joe and Hunter Biden in a quid pro quo for military aid. Compelling his testimony was cast as a matter of national urgency. Bolton was never given the chance as Senate Republicans voted to block witnesses and acquit Trump on both impeachment counts.

In the publicity blitz for his new memoir, “The Room Where It Happened,” Bolton has tried to keep the initial narrative alive. Speaking to ABC News, he claimed that Trump, at a meeting in August 2019, said he “wanted a probe of Joe Biden in exchange for delivering the security assistance.” That conversation, Bolton added, “was the crispest indication of the linkage. … The specificity of the linkage, I think, was unmistakable.”

His memoir, however, fails to substantiate that allegation.

In fact, Bolton offers new evidence that undermines it.

What he told Martha Raddatz is not what he writes in his book. Instead of a sharp demand of a quid pro quo, Bolton writes, Trump “said he wasn’t in favor of sending [Ukraine] anything until all the Russia-investigation materials related to [Hillary] Clinton and Biden had been turned over.”

Bolton does not explain what he means by “materials” – and no interviewer has asked him to so far. RealClearInvestigations’ request to Bolton for comment, sent through a representative, was not immediately answered.

No Word on Burisma

Regardless, those were not at the heart of Trump’s impeachment. Trump was not impeached for trying to coerce Ukraine into handing over “Russia-investigation materials” to the U.S., but for allegedly trying to force Ukraine President Volodymyr Zelensky to open a wholly separate investigation of the Bidens and Burisma, the gas company where Hunter was given a lucrative board seat while his father was running U.S. policy in Ukraine.

Yet Burisma is not even mentioned in Bolton’s book – and Hunter only in passing. This includes an acknowledgement that Bolton does not even remember if the younger Biden was actually discussed. At a May 8 meeting where Trump and his legal adviser Rudy Giuliani discuss the latter’s “desire to meet with President-Elect Zelensky,” Bolton cannot recall if the purpose is “to discuss [Ukraine’s] investigation of either Hillary Clinton’s efforts to influence the 2016 campaign or something having to do with Hunter Biden and the 2020 election, or maybe both.”

Son gets job on energy company board after his father’s government backs violent coup.

Bolton says his recollections are not precise because the Ukraine-related theories floating around the Trump administration “always seemed intermingled and confused, one reason I did not pay them much heed. Even after they became public, I could barely separate the strands of the multiple conspiracy theories at work.”

Bolton’s words are also ambiguous. The fact that Trump allegedly “said he wasn’t in favor of sending [Ukraine] anything” is not an explicit linkage to military aid. And as for the “Russian-investigation materials,” Bolton does not specify what Trump was referring to. It seems likely Trump may have been referencing his reported theory that the Democratic National Committee server was somehow hacked with Ukrainian involvement.

Trump may also have been seeking information on the Ukrainians who openly admitted to interfering in the 2016 campaign with the aim of thwarting his candidacy, most notably by leaking allegations of illegal payments to Paul Manafort. It is highly plausible that these were Trump’s priorities. In his July 25 phone call with Zelensky, which sparked the whistleblower complaint behind Ukrainegate, Trump’s top issue – and the object of the “favor” he requested – was not the Bidens, but securing Zelensky’s assistance with the Justice Department’s ongoing review of how the Russia investigation began in 2016.

Whatever the case, for Bolton to write that Trump drew a link between these issues and the security aid – and not a link to a demand that Ukraine open an investigation of the Bidens and Burisma – contradicts the impeachment case that many expected him to validate.

Bolton, perhaps inadvertently, also lends credence to the Trump administration’s public defense of its freeze on security assistance to Ukraine, which Democrats cast as the linchpin of a politically motivated quid pro quo. In his July 25 call with Zelensky and subsequent public statements, Trump has said that he wanted NATO allies to spend more on Ukrainian military funding. Bolton recounts that on Aug. 30 – just days after an article in Politico made the aid freeze public, including to the Ukrainian government – Trump repeated his complaints about the U.S. burden, and proposed that NATO provide Ukraine with the security assistance instead of Washington:

Trump said, “I don’t give a shit about NATO. I am ready to say, ‘If you don’t pay, we won’t defend them.’ I want the three hundred million dollars [he meant two hundred fifty million dollars, one piece of the assistance earmarked for Ukraine] to be paid through NATO.” … He then said to Pence, “Call [NATO Secretary General Jens] Stoltenberg and have him have NATO pay. Say ‘The President is for you, but the money should come from NATO,’” which still didn’t make any sense.

If Trump is freezing the military aid for the sole purpose of coercing a Ukrainian investigation, it would be incongruous for him to propose an outcome that delivers the money without the investigation he is supposedly trying to compel.

As a part of their impeachment case, Democrats argued that Trump released the aid to Ukraine only after getting caught through publicity surrounding the whistleblower complaint. Yet Bolton writes that after Ukraine conducted a successful prisoner swap with Russia on Sept. 7, “Trump had seemingly indicated” that the swap “might be enough to get him to release the security assistance.” The money was released four days later, on Sept. 11.

Says He Wanted Nothing to do With Ukraine

Bolton confirms national security aide Fiona Hill’s testimony that he told her he did not want to be “part of whatever drug deal Sondland and [White House Chief of Staff Mick] Mulvaney are cooking up.” But he offers context that makes that line far less explosive than it was initially received. Bolton was not referring to leveraging any military aid, but to Sondland’s attempt to push for a hasty meeting between Trump and Zelensky at the White House, where the “Giuliani issues” could be discussed before Ukraine’s parliamentary elections in July.

Bolton says he nixed the idea of a meeting because Trump had recently told him that “he didn’t want to have anything to do with Ukrainians of any stripe,” due to Ukrainian meddling against him in the 2016 campaign. Sondland, in Bolton’s view, was “freelancing.” According to Bolton, Trump had also “resolved the visit issue just before leaving for the United Kingdom in June,” by saying he would meet with Zelensky “not until the fall, the right outcome in my view.” 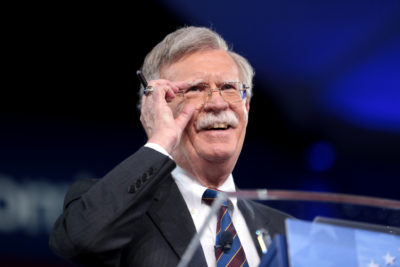 It is easy to forget why Bolton was initially cast as a savior figure in January by those hoping to remove Trump by impeachment. When news of his memoir emerged, 10 days after the Senate trial began, Democrats had failed to prove their case. Not a single witness in the House impeachment hearings had provided direct evidence of a quid pro quo. The only witness who even spoke to Trump about the Ukraine aid was the then-European Union Ambassador Gordon Sondland. He  reiterated multiple times that “nobody told me directly that the aid was tied to anything,” and that such a linkage was only his “presumption” and “personal, you know, guess.”

Sondland’s testimony was even more damaging to the impeachment case because, according to the impeachment narrative, he was the Trump official who purportedly relayed the alleged quid pro quo to the Ukrainian side. But Sondland revealed that he had only told Zelensky aide Andriy Yermak, in “a very, very brief pull-aside conversation,” that “I didn’t know exactly why” the aid has been frozen, but that a demand to open investigations “could be a reason.”

For his part, Yermak has said he does not even remember discussing the frozen aid with Sondland. That highlighted another problem with the Democrats’ quid pro quo allegation: Not a single Ukrainian official substantiates it. In addition to Yermak, President Zelensky and Foreign Minister Vadym Prystaiko also said that they saw no tie between the frozen military funding and pressure to open investigations. Even Democratic Sen. Chris Murphy, a staunch impeachment advocate, corroborates them: When they met in early September, Murphy recalled, Zelensky “did not make any connection between the aid that had been cut off and the requests that he was getting from Giuliani.”

The Ukrainians’ claims make sense in light of the fact that they only learned of the aid freeze, along with the rest of the world, with the Politico article published August 28. That would have meant that the supposed quid pro quo demand was made to them only after the issue became a matter of public controversy. That scenario was always implausible on its face. And now Bolton’s memoir has failed to change the picture. Bolton seems to grasp this fact. “I think the House Democrats built a cliff, they threw themselves off of it,” he told Raddatz of ABC News. “And halfway down, they looked up and saw me, and said, ‘Hey, why don’t you come along?”

Aaron Maté is a journalist and producer. He hosts “Pushback with Aaron Maté” on The Grayzone. He is also is contributor to The Nation magazine and former host/producer for The Real News and Democracy Now!. Aaron has also presented and produced for Vice, AJ+, and Al Jazeera.