Thalia Anthony and Stephen Gray show how the prime minister’s assertion is at odds with the historical record.

Prime Minister Scott Morrison asserted in a radio interview that “there was no slavery in Australia.”

This is a common misunderstanding which often obscures our nation’s history of exploitation of First Nations people and Pacific Islanders.

Morrison followed up with “I’ve always said we’ve got to be honest about our history”. Unfortunately, his statement is at odds with the historical record.

This history was widely and publicly documented, among other sources, in the 2006 Australian Senate report Unfinished Business: Indigenous Stolen Wages.

Australia was not a “slave state” like the American South. However, slavery is a broader concept. As Article 1 of the United Nations Slavery Convention says:

Slavery is the status or condition of a person over whom any or all of the powers attaching to the right of ownership are exercised.

These powers might include non-payment of wages, physical or sexual abuse, controls over freedom of movement, or selling a person like a piece of property. In the words of slavery historian Orlando Patterson, slavery is a form of “social death”.

Slavery has been illegal in the (former) British Empire since the Act for the Abolition of the Slave Trade of 1807, and certainly since 1833.

Slavery practices emerged in Australia in the 19th century and in some places endured until the 1950s. 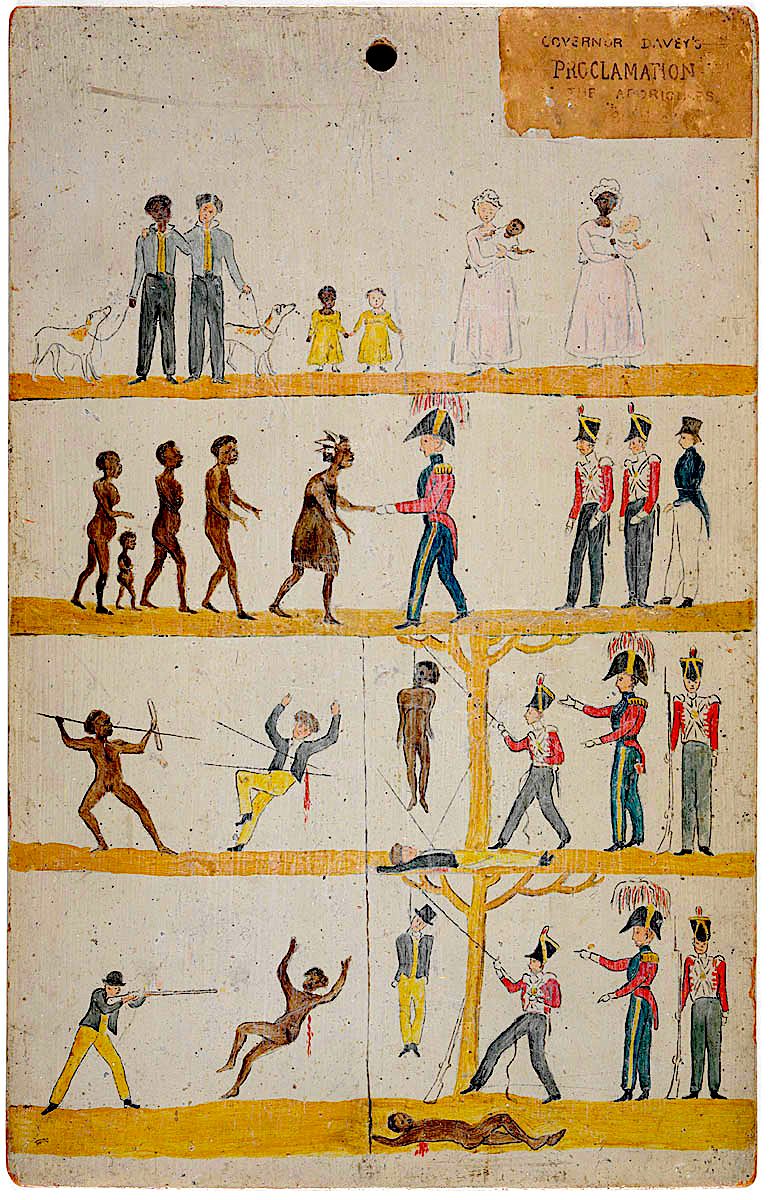 “Governor Davey’s Proclamation” board, painted in 1830 and nailed to trees to depict a policy of friendliness and to show that colonists and Aboriginal people were equal before the law. (Government of Van Diemen’s Land, original conception by Surveyor General George Frankland, State Library of New South Wales, Wikimedia Commons)

Early Coverage of Slavery in AustraliaAs early as the 1860s, anti-slavery campaigners began to invoke “charges of chattel bondage and slavery” to describe north Australian conditions for Aboriginal labour.

In 1891 a “Slave Map of Modern Australia” was printed in the British Anti-Slavery Reporter, a journal that documented slavery around the world and campaigned against it.

… the traffic in Aboriginal labour, both children and adults, had descended into slavery conditions.

Seeds of Slavery in Australia 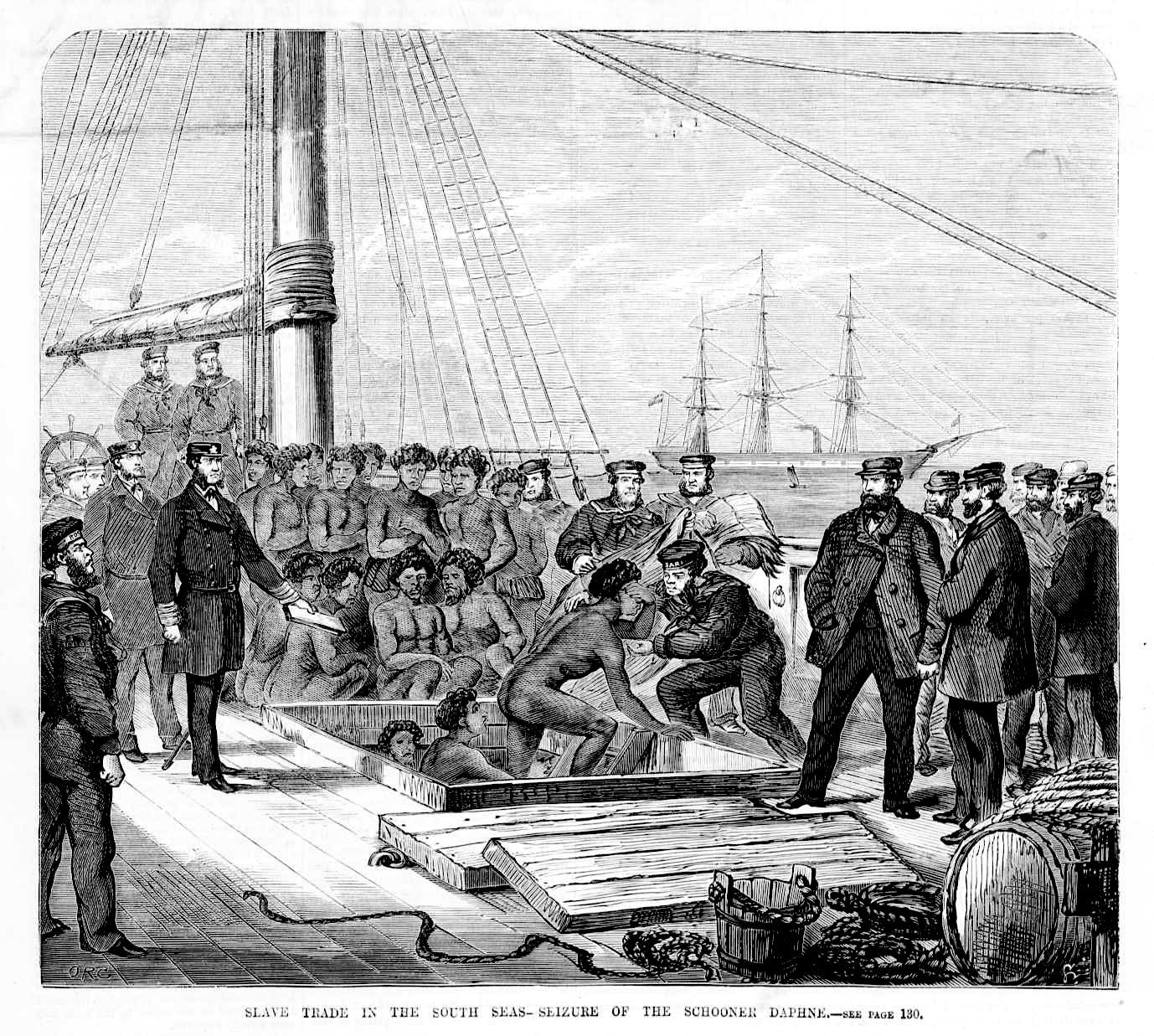 Seizure of the “blackbirding” schooner Daphne and its cargo by the HMS Rosario in 1869. (Samuel Calvert and Oswald Rose Campbell, National Library of Australia, Wikimedia Commons)

Some 62,000 Melanesian people were brought to Australia and enslaved to work in Queensland’s sugar plantations between 1863 and 1904. First Nations Australians had a more enduring experience of slavery, originally in the pearling industry in Western Australia and the Torres Strait and then in the cattle industry.

In the pastoral industry, employers exercised a high degree of control over “their” Aboriginal workers, who were bought and sold as chattels, particularly where they “went with” the property upon sale. There were restrictions on their freedom of choice and movement. There was cruel treatment and abuse, control of sexuality, and forced labour.

A stock worker at Meda Station in the Kimberley, Jimmy Bird, recalled:

… whitefellas would pull their gun out and kill any Aborigines who stood up to them. And there was none of this taking your time to pull up your boots either. No fear!

if you are sitting down minding your own business, a station manager can come up to you and say, “I want a couple of blackfellows” … Just like picking up a cat or a dog.

Through their roles under the legislation, police, Aboriginal protectors and pastoral managers were complicit in this force.

Slavery was Sanctioned by Australian Law 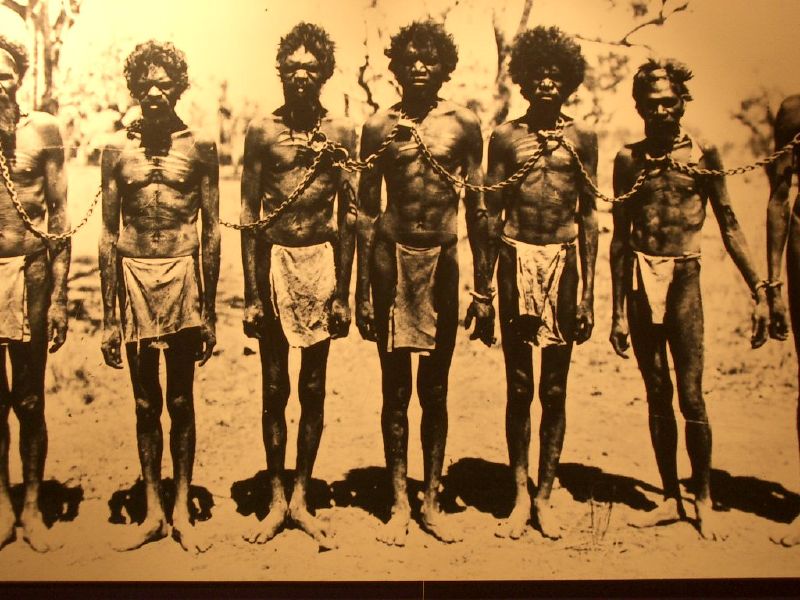 Legislation facilitated the enslavement of Aboriginal people across the Northern Territory, Western Australia, South Australia and Queensland. Under the South Australian Aborigines Act 1911, the government empowered police to “inspect workers and their conditions” but not to uphold basic working conditions or enforce payment. The Aboriginals Ordinance 1918 (Cth) allowed the forced recruitment of Indigenous workers in the Northern Territory, and legalised the non-payment of wages.

In Queensland, the licence system was effectively a blank cheque to recruit Aboriginal people into employment without their consent. Amendments to the Aboriginal Protection and Restriction of the Sale of Opium Act 1897 gave powers to the Protector or police officer to “expend” their wages or invest them in a trust fund – which was never paid out.

Officials were well aware that “slavery” was a public relations problem. The Chief Protector in the Northern Territory noted in 1927 that pastoral workers:

… are kept in a servitude that is nothing short of slavery.

In the early 1930s, Chief Protector Dr. Cecil Cook pointed out Australia was in breach of its obligations under the League of Nations Slavery Convention.

‘… it certainly exists here in its worst form’

Accusations of slavery continued into the 1930s, including through the British Commonwealth League.

… owned neither the huts in which they lived nor the land on which these were built, they had no rights of tenure, and in some cases have been sold or transferred with the property.

In 1958, counsel for the well-known Aboriginal artist Albert Namatjira argued that the Welfare Ordinance 1953 (Cth) was unconstitutional, because the enacting legislation was:

… a law for the enslavement of part of the population of the Northern Territory.

Australia has unfinished business in repaying wages to Aboriginal and South Sea Islander slaves. First Nations slave work allowed big businesses to reap substantial profits, and helped maintain the Australian economy through the Great Depression. Aboriginal people are proud of their work on stations even though the historical narrative is enshrined in silence and denial.

As Bundjalung woman Valerie Linow has said of her experiences of slavery in the 1950s:

What if your wages got stolen? Honestly, wouldn’t you like to have your wages back? Honestly. I think it should be owed to the ones who were slave labour. We got up and worked from dawn to dusk … We lost everything – family, everything. You cannot go stealing our lousy little sixpence. We have got to have money back. You have got to give something back after all this country did to the Aboriginal people. You cannot keep stealing off us.

Thalia Anthony is professor of law at the University of Technology Sydney and Stephen Gray, Senior Lecturer, Faculty of Law, Monash University

4 comments for “Was There Slavery in Australia? Yes. It Shouldn’t Even Be Up for Debate”