These are public servants. Imagine if teachers, mail carriers or DMV employees were routinely assaulting anyone who spoke impolitely to them, writes Caity Johnstone.

Social media has been flooded with an endless stream of footage of police brutality as Black Lives Matter protests continue throughout the United States. As of this writing everyone’s talking about a 75 year-old man who was knocked unconscious after being forcefully shoved for getting in a police officer’s way at a protest in Buffalo, New York, but it will soon be replaced by other headline-grabbing videos of physical assault by police officers.

Wherever these videos emerge online you will inevitably see a deluge of cop apologia (which I decided just now I’ll be calling copologia) saying the footage is fake or the victim deserved it and the cop’s just trying to get home to his family blah blah blah.

There is not enough gold in the earth’s crust to make the number of olympic medals these people deserve for all the mental gymnastics they are performing to excuse unprovoked, completely unnecessary acts of violence from public employees whose job isn’t even statistically all that dangerous.

Most of these copologists do not even know why they are falling all over themselves to try and justify police brutality. It’s a conditioned response, like turning your head when someone calls your name.

They don’t think about it, it’s just something they’ve been conditioned to do by decades of media and cultural indoctrination into an empire whose survival depends on the existence of a violent and militarized police force. They hear Pavlov’s bell and start salivating, just as they’ve been programmed to.

The thing is, their creative energy is being spent entirely in vain. Police and their apologists have already lost the argument.

There’s no taking it back. There’s no fixing it. It’s done. The debate is officially over. Huge, sweeping changes must immediately be made, and there’s no valid reason for the protests to stop until that has occurred.

These videos have made it clear that the institution of policing in America is completely sick from coast to coast, right down to its very culture. The most obvious example I can point to is that watching just a few minutes of the footage of police brutality at these protests makes it undeniably apparent that a belief pervades police culture that it is okay to physically assault someone who has made you feel emotionally upset. 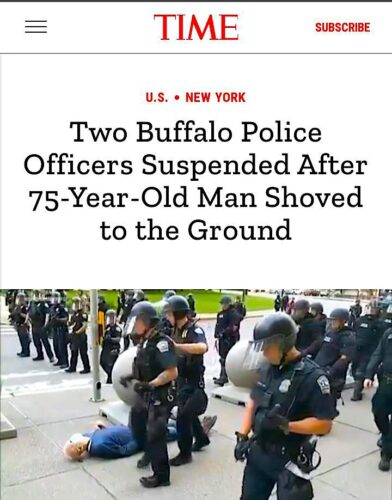 This is absolutely ridiculous. These are public servants. Imagine if teachers, mail carriers or DMV employees were routinely assaulting anyone who spoke impolitely to them.

Police should definitely be made to feel ashamed of having this attitude. They should be mocked and laughed at for it widely and consistently. It’s not okay to assault someone who hurt your feelings. You’re a taxpayer-funded employee. You get to retire after 25 years. Get over yourself.

The fact that words pose no actual threat to you is something people are supposed to learn as children. There are nursery rhymes for it. The fact that public servants feel entitled to respect and deference from complete strangers should have been trained out of them from day one and been a strict taboo throughout the entire culture.

But it wasn’t. Because the entire institution is mentally ill. There is no saving this limb.

On the rare occasion that a squad of meatheads with batons is necessary they can always be called in like a SWAT team. Ending the drug war, eliminating unhelpful laws and replacing the armed goon patrol with social workers would purge America of this gangrenous limb and begin a movement toward health.

Whatever changes are made, they need to be swift, and they need to be massive. Anything less is completely unacceptable. This has been resolved beyond any possible dispute.

The Most Revealing Footage

Among the constant deluge of police brutality footage flooding the internet as America’s armed goon patrol responds to the Black Lives Matter protests across the nation, there is one video which stands out above all the others in illustrating just how pervasively violent police culture is. Curiously enough, this video itself contains no police brutality.

The video clip in question shows the outside of the Buffalo City Courthouse, where members of the police and fire unions awaited the two officers who hospitalized a 75 year-old peace activist named Martin Gugino by shoving him to the ground. When the two officers exited the courthouse, released on their own recognizance, they were met with applause from the crowd.

“Two police officers were charged with felony assault during a protest in Buffalo, and they were applauded by their colleagues as they left the courthouse,” MSNBC reports as its footage shows a large gathering clapping and whistling enthusiastically.

This, right here, is a sign of a culture that cannot be redeemed. A police culture which makes no secret of the fact that cops as a collective will consistently support the most self-evidently unjustifiable acts of brutality committed by their own.

This video emerges after 57 Buffalo police resigned from their department’s Emergency Response Team in protest of the suspension of the two officers who’d been recorded assaulting the old man without the slightest provocation. It emerges after the Buffalo Police Department was caught lying that Gugino had “tripped and fell” before footage surfaced showing Gugino being shoved hard and smashing his skull on the pavement.

This police department could not possibly have made it more clear to the public that they unconditionally support one another in their viciousness and savagery.

This is far more damning than any of the many, many video clips circulating that demonstrate irrefutably how police and their apologists have already lost the debate on this matter. It makes a lie of the widespread narrative that this is just a minor problem caused by a few bad apples while the “vast majority” (to quote the 44th president) are good people who uphold their duty to protect and serve the community.

This isn’t working. Police culture cannot be saved, and has no interest in being saved. In the eyes of the armed goon patrol, it’s the people complaining about police brutality who are the problem. That’s why the response to them has been consistent and copious amounts of police brutality.

The problem, as we’ve discussed previously, is that those in power have no intention of ever departing with the violent goon patrol which gives them the ability to brutalize the public if they get out of line.

Many of them are providing lip service to solidarity and listening and understanding right now, but make no mistake: the mainstream rank-and-file public awakening to the reality that they live in a militarized authoritarian police state was not in the script, and they are getting very nervous about its implications.

It will be interesting to see how this plays out, to say the least.

← Facebook Singles Out State Media of US Adversaries for a Warning
UPRISING: Hundreds of Thousands March in US for Racial Justice and Police Reform, While Tense Days Lie Ahead; Protests Lead to Minneapolis Vow to Abolish its Police Force →

27 comments for “UPRISING: Police and Their Apologists Have Already Lost the Argument”