I spent some time yesterday overwhelmed with grief when I realized I won’t get to hug my elderly parents for months, at best, writes Caitlin Johnstone. This is happening all around the world right now, with all of us. 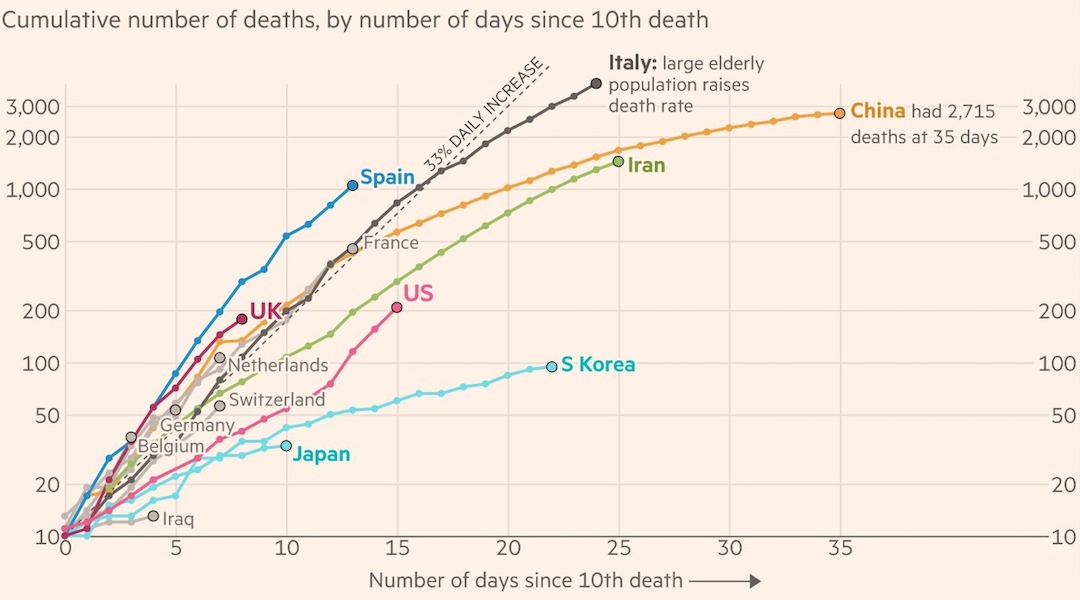 Imagine if you looked out your window tomorrow morning and saw a mushroom cloud growing on the horizon.

What do you imagine your first thoughts would be?

Do you imagine you’d think to yourself, “Man I wish I’d spent more time arguing with Tulsi Gabbard supporters on the internet”? Or “I wish I’d devoted more of my mental energy to what a jerk Dale from accounting is”? Or “Maybe I can call my sister and get in one last passive-aggressive jab at her for thinking she’s better than me all these years”?

Now, this pandemic is of course not the same as a nuclear holocaust. It will not kill all of us, or even most of us. But it does appear likely that, for better or for worse, it’s going to change the world in some pretty significant ways.

Which means that we are taking a giant leap into the unknown, which can feel like a kind of death. And, since we are all taking that leap together, it can feel like we’re all about to die.

When you’re standing on the brink of a history-shaping global paradigm shift, if you’re really consciously experiencing the reality of your situation instead of dissociating and compartmentalizing away from it, you will necessarily have to re-evaluate your priorities. Your priorities in life. Your priorities in thinking about your world. What really matters when you’re about to take the plunge into the Big Unknown.

The contradiction between knowing that extreme measures are obviously needed in order to contain the virus but doing so means giving awful states like the US & UK sweeping powers that they will definitely misuse & likely make permanent is extremely hard to reconcile and process.

"What this means is that if there is to be any deviation from our species’ self-destructive trajectory, the cause of that deviation will come completely out of left field."https://t.co/whgNxmEive

If we are bravely confronting the reality that we may emerge on the other side of this thing to a world that is in some ways unrecognizable to us, some things we previously didn’t pay as much attention to will become more important to us, and other things will become less important.

Our personal relationships will become more precious to us. My elderly parents are isolating now so I’m video-chatting with them every day, and I spent some time yesterday overwhelmed with grief when I realized I won’t get to hug them for months, at best. This is happening all around the world right now, with all of us.

For those of us who are political, it will also change our areas of emphasis. As near as I can tell the four most crucial and attention-worthy things in the world right now are (A) the virus itself, (B) the certainty that powerful people will try to use the virus to advance longstanding authoritarian agendas which they have no intention of reversing, (C) the acceleration toward cold war escalations between the U.S. and China, and (D) the possibility of an opportunity to create something good for all of us coming out of the increasing amount of shifts and changes we are experiencing. And not necessarily in that order.

It will also de-emphasise a lot of things we’d previously been placing immense importance on. The U.S. presidential race is the first thing that comes to mind. It consumed so much of our attention over the past year, but now it’s a fairly safe bet that this virus and its consequences are going to affect our lives and the world far, far more than they would be affected if the White House changed hands or stayed under the current administration. Doesn’t mean this doesn’t matter at all, just that it’s less significant now.

There are many other areas where people have been placing emphasis that they will necessarily de-emphasize when they get real with themselves about what’s going on which will vary from person to person. Maybe you see the things we should prioritize differently from how I see them. Maybe you see the things we should de-emphasize differently as well. It doesn’t really matter; all that matters is that we be very courageously honest with ourselves and the reality of our situation, and that we rearrange our priorities in a way that we feel best reflects this.

That’s all I’ve got to say about this for now. Let’s keep watching the shifting tides together.

← COVID-19: Prepared for the Wrong War
COVID-19: In Midst of Crisis, Italian and US Healthcare Compared →

12 comments for “COVID-19: Re-Prioritizing Our Lives & Our Thinking”