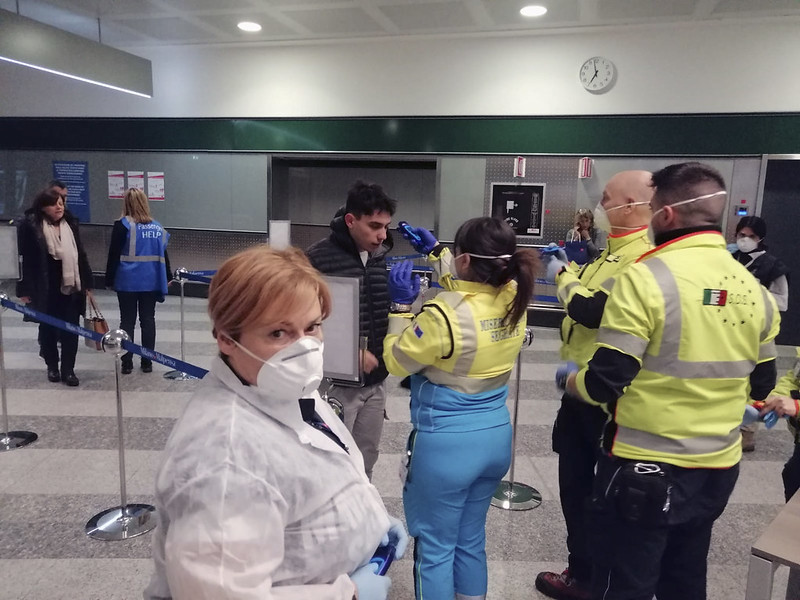 By Samira Sadeque
at the United Nations
IPS

Just a month since the World Health Organization declared the Coronavirus a public health emergency, it is now taking steps to contain misinformation being spread about the disease. Globally, there have been more than 82,000 cases of Coronavirus, which has claimed 2,800 lives — the majority being in China, where the disease has been traced to.

On Thursday, United Nations Secretary General António Guterres reiterated at a talk in New York that it’s not yet a pandemic but urged people to practice caution.

“We are not yet in a pandemic, but there is a clear risk there and the window of opportunity to avoid it is narrowing,” he said, adding that governments must do everything possible to stop the transmission and to do it now. He also expressed his concern about countries in the developing world that “lack the capacity” to address the massive scale of the issue.

He urged people to avoid stigmatizing the illness, and to “have a human rights approach to the way this disease is fought.”

However, as health officials around the world continue to gear up for the disease, which seemingly has no cure, there is another aspect of the crisis to be dealt with: misinformation about it spreading on the internet.

David P. Fidler, a senior fellow for cybersecurity and global health at the non-profit think tank, Council on Foreign Relations, detailed the issue of misinformation and the harm it does during a health emergency like this.

“Disinformation threatens health because it undermines confidence in the underlying science, questions the motivations of health professionals, politicises health activities, and creates problems for responses to disease challenges,” he wrote in 2019 about how disinformation during an Ebola outbreak was a major concern.

He went on to explain that it has historic roots: often, illnesses are mistakenly associated or linked to immigrants or a foreign country in order to perpetuate xenophobic sentiments.

“Spreading misinformation about diseases was a tactic of disinformation campaigns by governments before the social media era,” he wrote.

IPS caught up with Fidler on how misinformation in the current situation can exacerbate the crisis:

Inter Press Service (IPS): Usually during a crisis like this (or in the past during Ebola or SARS), what is the main challenge in containing misinformation being spread?

David Fidler (DF): In past outbreaks, two factors typically converged to produce problems from information and misinformation: uncertainty about the outbreak on the part of national and international health officials making efforts to address the disease, and lack of trust in the population in the information provided by official sources. These factors appeared in disease outbreaks before the advent of social media, and the scale and intensity of information and misinformation circulating on social media platforms exacerbates the two factors noted above.

In addition, the ease with which misinformation can be spread and amplified on social media has become yet another factor public health officials have to address in dealing with outbreaks. Social media even makes communicating accurate information more difficult. I have seen, across my Twitter feed, a cacophony of attempts to share information that has frustrated experts trying to identify and share the latest information about COVID-19.

IPS: What leads to misinformation during times like this?

DF: In the past, people with political agendas would exploit the fear that serious outbreaks create to produce and spread misinformation. Such misinformation in essence weaponized the outbreak for other political purposes. In the age of social media, this “weaponization” of outbreaks for political purposes has become, for lack of a better term, industrialized by state and non-state actors exploiting the potential of social media to spread misinformation on a scale and at a speed never seen before, especially in the public health context.

IPS: What, in your opinion, is currently the biggest misunderstanding about the Coronavirus?
DF: We are seeing, I think, a “triple burden” in the information space concerning COVID-19. First, international and national health officials are struggling to communicate information concerning a new virus about which much is not known.

However, at the international level, WHO has made the information climate worse by praising China’s response even though much of what China has done in trying to address the outbreak in its territory is not consistent with WHO’s recommendations on the outbreak or WHO’s emphasis in the past on responses to outbreaks that do not unnecessarily restrict trade, travel, and human rights. WHO’s credibility, I think, has taken a massive hit. At the national level, we see, for example, the current circus in the U.S. government about communicating to the American people about the outbreak, and I imagine other national governments are also scrambling to get the “messaging” right.

What’s astonishing to me, having studied outbreaks for nearly three decades, is that this communication problem continues to flummox national and international health officials just about every single time – so that “lesson learned” is apparently never actually learned.

Second, we are seeing the weaponization of the outbreak in the misinformation being circulated for different political purposes. For me, this outbreak is different in that the weaponization has connected to the change in geopolitics, with the rise of China and worries about China’s growing power and influence sharpening and broadening criticism of China’s response to the outbreak. Here, unlike Ebola in Africa, we have the outbreak entangled with the increasing rawness of balance of power politics between the United States and China.

Third, we have the social media effect where state and non-state actors are spreading misinformation widely and rapidly in a context where no government or international organisation has any effective policy responses to address this problem.

IPS: What is your recommendation to policymakers to help prevent the spread of misinformation?

DF: The touchstones of effective communication during outbreaks have been studied and promulgated frequently, so follow the playbook, including making the most up-to-date information available with great frequency across media outlets in ways accessible to people, and include in the information advice on any steps individuals can take to protect themselves and their families. Rinse and repeat, again and again as the outbreak evolves. The information/misinformation environment is more competitive now because of social media, but the basic principles of effective communication in a crisis context remain valid even amidst more noise.

IPS: What is your recommendation to institutions such as schools and workplaces?

IPS: What is your recommendation to individuals?

DF: Do not rely solely on social media for information about the COVID-19 outbreak and how it might affect you and your family. Visit and re-visit the information provided by the U.S. Centers for Disease Control and translate that information into your individual and family circumstances.

In order to tackle the misinformation concerns, WHO launched its EPI-WIN initiative, which aims to provide users with timely and accurate information while also filtering through “infodemics,” which the organization describes as “excessive amount of information about a problem that makes it difficult to identify a solution.”

Samira Sadeque is a correspondent for Inter Press Service.