The U.S. was in talks for a deal with Julian Assange but then FBI Director James Comey ordered an end to negotiations after Assange offered to prove Russia was not involved in the DNC leak, as Ray McGovern explains.

In light of news that Julian Assange’s lawyers have raised an alleged pardon offer by Donald Trump to the WikiLeaks publisher in exchange for clearing Russia of any involvement in WikiLeaks’ publication of Democratic Party emails, we republish this article by Ray McGovern, which first appeared on June 27, 2018. It provides light on another angle in which Assange was being offered “limited” immunity in exchange for Assange testimony showing Russia was not his source on the emails, which was then crushed by a former FBI director and a U.S. Senator. It also shows that Assange’s prosecution is political, a point his attorneys are expected to make at next week’s formal extradition hearing.  The U.S.-British extradition treaty excludes political crimes.

An explosive report by investigative journalist John Solomon on the opinion page of [June 25, 2108’s] edition of The Hill sheds a bright light on how Sen. Mark Warner (D-VA) and then-FBI Director James Comey collaborated to prevent WikiLeaks editor Julian Assange from discussing “technical evidence ruling out certain parties [read Russia]” in the controversial leak of Democratic Party emails to WikiLeaks during the 2016 election.

A deal that was being discussed last year (2017) between Assange and U.S. government officials would have given Assange “limited immunity” to allow him to leave the Ecuadorian Embassy in London, where he has been exiled for six years. In exchange, Assange would agree to limit through redactions “some classified CIA information he might release in the future,” according to Solomon, who cited “interviews and a trove of internal DOJ documents turned over to Senate investigators.” Solomon even provided a copy of the draft immunity deal with Assange.

But Comey’s intervention to stop the negotiations with Assange ultimately ruined the deal, Solomon says, quoting “multiple sources.” With the prospective agreement thrown into serious doubt, Assange “unleashed a series of leaks that U.S. officials say damaged their cyber warfare capabilities for a long time to come.” These were the Vault 7 releases, which led then CIA Director Mike Pompeo to call WikiLeaks “a hostile intelligence service.”

Solomon’s report provides reasons why Official Washington has now put so much pressure on Ecuador to keep Assange incommunicado in its embassy in London. 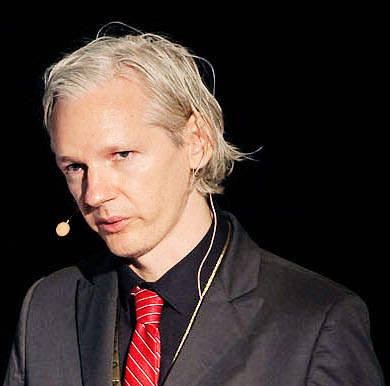 The report does not say what led Comey to intervene to ruin the talks with Assange. But it came after Assange had offered to  “provide technical evidence and discussion regarding who did not engage in the DNC releases,” Solomon quotes WikiLeaks‘ intermediary with the government as saying.  It would be a safe assumption that Assange was offering to prove that Russia was not WikiLeaks‘ source of the DNC emails.

If that was the reason Comey and Warner ruined the talks, as is likely, it would reveal a cynical decision to put U.S. intelligence agents and highly sophisticated cybertools at risk, rather than allow Assange to at least attempt to prove that Russia was not behind the DNC leak.

The greater risk to Warner and Comey apparently would have been if Assange provided evidence that Russia played no role in the 2016 leaks of DNC documents.

Missteps and Stand Down

In mid-February 2017, in a remarkable display of naiveté, Adam Waldman, Assange’s pro bono attorney who acted as the intermediary in the talks, asked Warner if the Senate Intelligence Committee staff would like any contact with Assange to ask about Russia or other issues. Waldman was apparently oblivious to Sen. Warner’s stoking of Russia-gate.

Warner contacted Comey and, invoking his name, instructed Waldman to “stand down and end the discussions with Assange,” Waldman told Solomon.  The “stand down” instruction “did happen,” according to another of Solomon’s sources with good access to Warner.  However, Waldman’s counterpart attorney David Laufman, an accomplished federal prosecutor picked by the Justice Departent to work the government side of the CIA-Assange fledgling deal, told Waldman, “That’s B.S.  You’re not standing down, and neither am I.”

But the damage had been done.  When word of the original stand-down order reached WikiLeaks, trust evaporated, putting an end to two months of what Waldman called “constructive, principled discussions that included the Department of Justice.”

The two sides had come within inches of sealing the deal.  Writing to Laufman on March 28, 2017, Waldman gave him Assange’s offer to discuss “risk mitigation approaches relating to CIA documents in WikiLeaks’ possession or control, such as the redaction of Agency personnel in hostile jurisdictions,” in return for “an acceptable immunity and safe passage agreement.”

On March 31, 2017, though, WikiLeaks released the most damaging disclosure up to that point from what it called “Vault 7” — a treasure trove of CIA cybertools leaked from CIA files.  This disclosure featured the tool “Marble Framework,” which enabled the CIA to hack into computers, disguise who hacked in, and falsely attribute the hack to someone else by leaving so-called tell-tale signs — like Cyrillic, for example. The CIA documents also showed that the “Marble” tool had been employed in 2016.

Comey: Ordered an end to talks with Assange.

Veteran Intelligence Professionals for Sanity, which includes among our members two former Technical Directors of the National Security Agency, has repeatedly called attention to its conclusion that the DNC emails were leaked — not “hacked” by Russia or anyone else (and, later, our suspicion that someone may have been playing Marbles, so to speak).

In fact, VIPS and independent forensic investigators, have performed what former FBI Director Comey — at first inexplicably, now not so inexplicably — failed to do when the so-called “Russian hack” of the DNC was first reported. In July 2017 VIPS published its key findings with supporting data.

Why did then FBI Director Comey fail to insist on getting direct access to the DNC computers in order to follow best-practice forensics to discover who intruded into the DNC computers?  (Recall, at the time Sen. John McCain and others were calling the “Russian hack” no less than an “act of war.”)  A 7th grader can now figure that out.

Asked on January 10, 2017 by Senate Intelligence Committee chair Richard Burr (R-NC) whether direct access to the servers and devices would have helped the FBI in their investigation, Comey replied:  “Our forensics folks would always prefer to get access to the original device or server that’s involved, so it’s the best evidence.”

At that point, Burr and Warner let Comey down easy. Hence, it should come as no surprise that, according to one of John Solomon’s sources, Sen. Warner (who is co-chairman of the Senate Intelligence Committee) kept Sen. Burr apprised of his intervention into the negotiation with Assange, leading to its collapse.

Ray McGovern works with Tell the Word, a publishing arm of the ecumenical Church of the Saviour in inner-city Washington.  He was an Army Infantry/Intelligence officer and then a CIA analyst for a total of 30 years and prepared and briefed, one-on-one, the President’s Daily Brief from 1981 to 1985.