The demand that only mainstream establishment media sources be used to argue against establishment narratives is inherently contradictory, says Caitlin Johnstone. 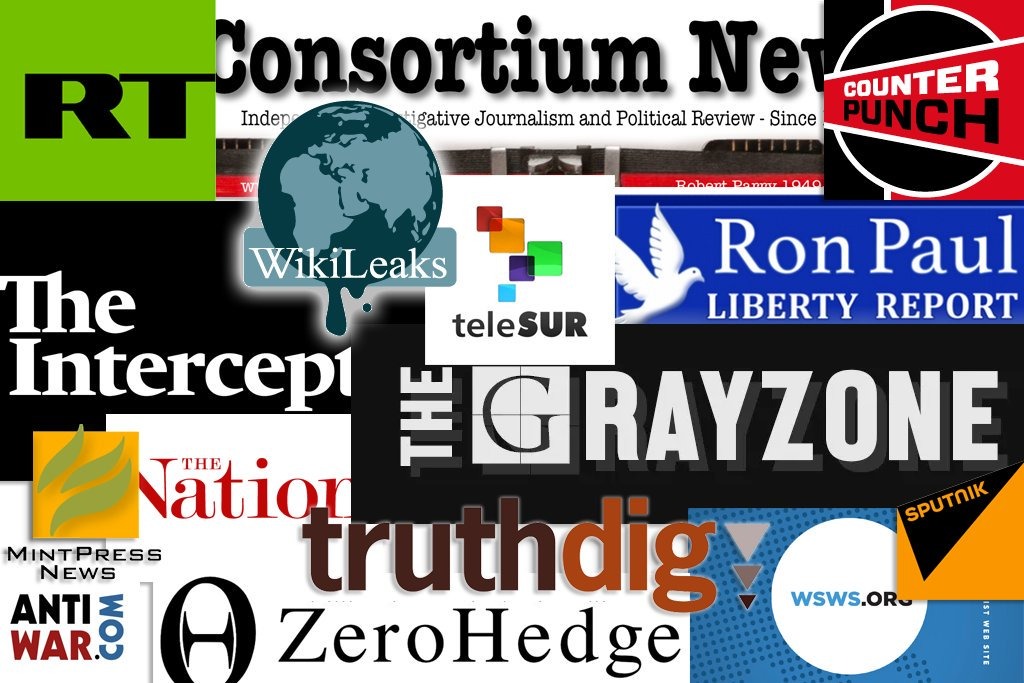 If you’re skeptical of Western power structures and you’ve ever engaged in online political debate for any length of time, the following has definitely happened to you.

You find yourself going back and forth with one of those high-confidence, low-information establishment types who’s promulgating a dubious mainstream narrative, whether that be about politics, war, Julian Assange, or whatever. At some point they make an assertion which you know to be false – publicly available information invalidates the claim they’re making.

“I’ve got them now!” you think to yourself, if you’re new to this sort of thing. Then you share a link to an article or video which makes a well-sourced, independently verifiable case for the point you are trying to make.

Then, the inevitable happens.

“LMAO! That outlet!” they scoff in response. “That outlet is propaganda/fake news/conspiracy theory trash!”

Or something to that effect. You’ll encounter this tactic over and over and over again if you continually engage in online political discourse with people who don’t agree with you. It doesn’t matter if you’re literally just linking to an interview featuring some public figure saying a thing you’d claimed they said. It doesn’t matter if you’re linking to a WikiLeaks publication of a verified authentic document. Unless you’re linking to CNN/Fox News (whichever fits the preferred ideology of the establishment loyalist you’re debating), they’ll bleat “fake news!” or “propaganda!” or “Russia!” as though that in and of itself magically invalidates the point you’re trying to make.

And of course, it doesn’t. What they are doing is called attacking the source, also known as an ad hominem, and it’s a very basic logical fallacy.

“An ad hominem is more than just an insult,” explains David Ferrer for The Quad. “It’s an insult used as if it were an argument or evidence in support of a conclusion. Verbally attacking people proves nothing about the truth or falsity of their claims.”

I don't think @bellingcat knows what's about to hit them now that @caitoz is on their case. Settle in for a few fun months as their entire bullshit narrative on #Syria chemical weapons comes tumbling down. Here's her opening jab: https://t.co/jvYfIBkDM2

Someone being an idiot, a propagandist or a conspiracy theorist is irrelevant to the question of whether or not what they’re saying is true. In my last article debunking a spin job on the OPCW scandal by the narrative management firm Bellingcat, I pointed out that Bellingcat is funded by imperialist regime change operations like the National Endowment for Democracy, which was worth highlighting because it shows the readers where that organization is coming from. But if I’d left my argument there it would still be an ad hominem attack, because it wouldn’t address whether or not what Bellingcat wrote about the OPCW scandal is true. It would be a logical fallacy; proving that they are propagandists doesn’t prove that what they are saying in this particular instance is false.

What I had to do in order to actually refute Bellingcat’s spin job was show that they were making a bad argument using bad logic, which I did by highlighting the way they used pedantic wordplay to make it seem as though the explosive leaks which have been emerging from the OPCW’s investigation of an alleged chemical weapons attack in Douma, Syria were insignificant. I had to show how Bellingcat actually never came anywhere close to addressing the actual concerns about a leaked internal OPCW email, such as extremely low chlorinated organic chemical levels on the scene and patients’ symptoms not matching up with chlorine gas poisoning, as well as the fact that the OPCW investigators plainly don’t feel as though their concerns were met since they’re blowing the whistle on the organisation now.

And, for the record, Bellingcat’s lead trainer/researcher guy responded to my arguments by saying I’m a conspiracy theorist. I personally count that as a win.

2/2 No principle is worth nuclear war. This honest reporter, @caitoz, beholden to no ideology or special interest, calls it as it is, not as the #MSM wants to see — https://t.co/miDXqmZAG7

Good luck finding a compilation of Trump’s dangerous escalations against Moscow like the one I wrote the other day anywhere in the mainstream media, for example. Neither mainstream liberals nor mainstream conservatives are interested in promoting that narrative, so it simply doesn’t exist in the mainstream information bubble. Every item I listed in that article is independently verifiable and sourced from separate mainstream media reports, yet if you share that article in a debate with an establishment loyalist and they know who I am, nine times out of ten they’ll say something like “LOL Caitlin Johnstone?? She’s nuts!” With “nuts” of course meaning “Says things my TV doesn’t say”.

It’s possible to just click on all the hyperlinks in my article and share them separately to make your point, but you can also simply point out that they are committing a logical fallacy, and that they are doing so because they can’t actually attack the argument.

This will make them very upset, because for the last few years establishment loyalists have been told that it is perfectly normal and acceptable to attack the source instead of the argument. The mass hysteria about “fake news” and “Russian propaganda” has left consumers of mainstream media with the unquestioned assumption that if they ever so much as glance at an RT article their faces will begin to melt like that scene in Raiders of the Lost Ark. They’ve been trained to believe that it’s perfectly logical and acceptable to simply shriek “propaganda!” at a rational argument or well-sourced article which invalidates their position, or even to proactively go around calling people Russian agents who dissent from mainstream western power-serving narratives.

But it isn’t logical, and it isn’t acceptable. The best way to oppose their favorite logically fallacious tactic is to call it like it is, and let them deal with the cognitive dissonance that that brings up for them.

Of course, some nuance is needed here. Remember that alternative media is just like anything else: there’s good and bad, even within the same outlet, so make sure what you’re sharing is solid and not just some schmuck making a baseless claim. You can’t just post a link to some Youtuber making an unsubstantiated assertion and then accuse the person you’re debating of attacking the source when they dismiss it. That which has been presented without evidence may be dismissed without evidence, and if the link you’re citing consists of nothing other than unproven assertions by someone they’ve got no reason to take at their word, they can rightly dismiss it.

If, however, the claims in the link you’re citing are logically coherent arguments or well-documented facts presented in a way that people can independently fact-check, it doesn’t matter if you’re citing CNN or Sputnik. The only advantage to using CNN when possible would be that it allows you to skip the part where they perform the online equivalent of putting their fingers in their ears and humming.

Don’t allow those who are still sleeping bully those who are not into silence. Insist on facts, evidence, and intellectually honest arguments, and if they refuse to provide them call it what it is: an admission that they have lost the debate.

Caitlin Johnstone is a rogue journalist, poet and utopia prepper who publishes regularly at Medium. Follow her work on Facebook, Twitter or her website. She has a podcast and a book, “Woke: A Field Guide for Utopia Preppers.”

← LETTER FROM BRITAIN: Why Labour Lost
THE ANGRY ARAB: US Middle East Policy in a Future Democratic Administration →