Today there’s no climate bill to vote on, there’s no bill in the pipeline and it is unlikely that there will be one soon, warns Arn Menconi. 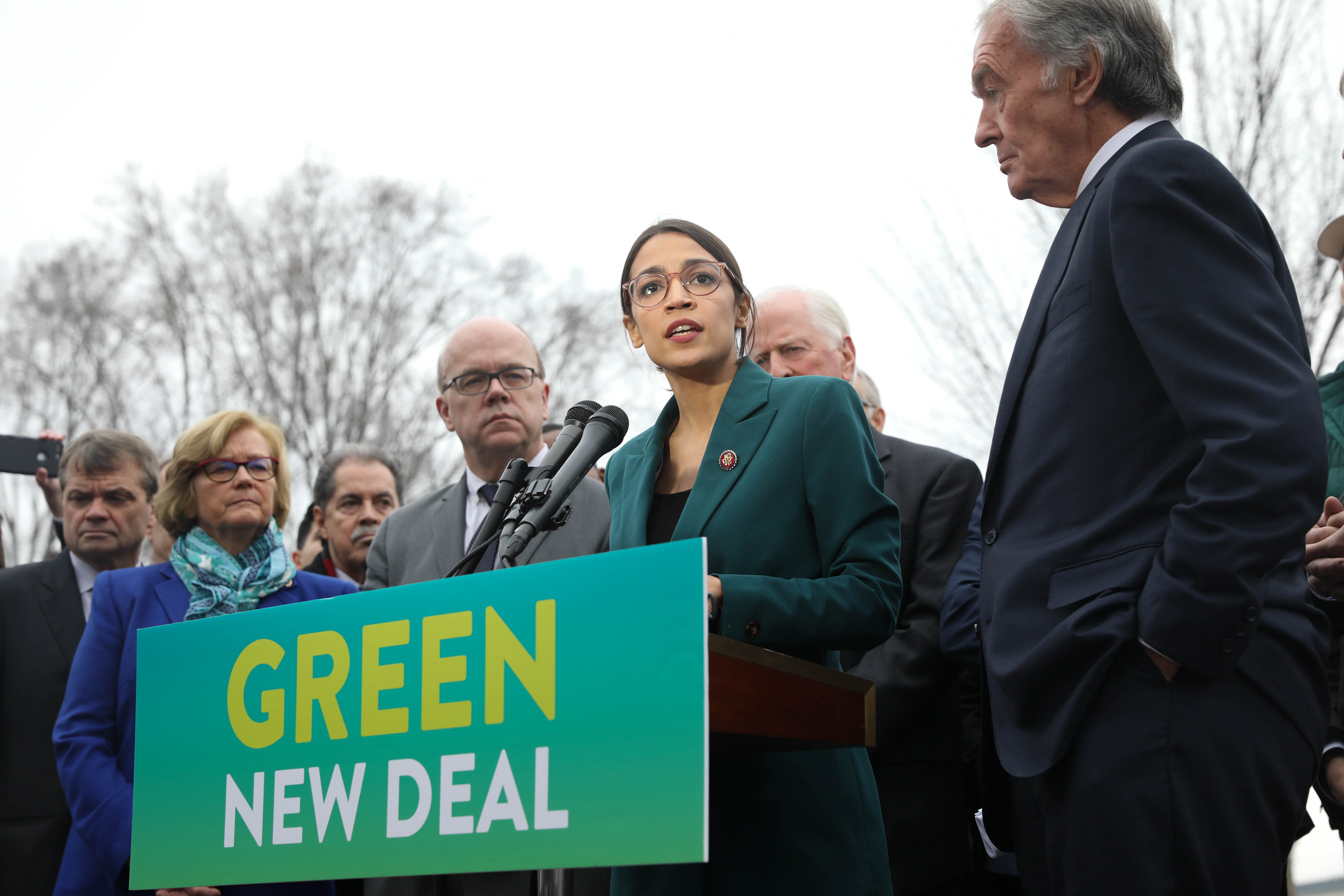 At Wednesday night’s Democratic presidential primary debate, billionaire candidate Tom Steyer said, “Congress has never passed an important climate bill ever.” Steyer said, “This is a problem which continues to get worse. That’s why I’m saying it’s a state of emergency.” Climate activist Arn Menconi was in Washington recently to lobby for a bill on the Green New Deal. This is his report.

When one thinks of the Green New Deal, a Zero Carbon Bill, or a Climate Solution Act, one imagines a comprehensive omnibus bill that covers the implementation of zero-carbon infrastructure in utilities, transportations, buildings and agriculture and creates jobs and spurs economic growth while addressing climate change.

But despite the extensive discussion of a Green New Deal, there is still no bill to vote on; nor, does it seem like there would be time for one to pass the 116th Congress before the 2020 election.

Needed is one of the most complicated bills in congressional history to confront scientist’s dire predictions and provide solutions.  Even if such a bill is passed, it would only address the 15 percent of the world’s emissions that come from the United States.

The Paris Climate Agreement challenged countries to cut greenhouse emissions to 2 degrees Celsius by 2050. The United Nation’s Intergovernmental Panel on Climate Change in October 2018 said we need to cut 45 percent of our fossil fuels by 2030 and the rest by 2050 to stay under 1.5 degrees Celsius; otherwise, the Earth’s temperature could go from the present 1 degree Celsius to 4-7 degrees by 2100. That is unsustainable for life.

I ran on the Green New Deal in 2016 for U.S. Senate in Colorado as a Green Party candidate. I was a county commissioner for eight years in the Rocky Mountains. I have lobbied Congress since 2001 and ran a national charity for youth for 20 years that taught me how difficult it is to get big ideas approved and implemented. I had gone to Standing Rock in 2016 as a Senate candidate to be on the frontlines. As someone who has been arrested a few times in D.C. for my activism, I decided to make the effort to see a bill written and passed into law to mitigate the rise of greenhouse gases.

The Future is Here

In November 2018, when the climate activists of Sunrise Movement took over House Speaker Nancy Pelosi’s office demanding change, they brought new hope to the environmental movement. Newly elected Congresswoman Alexandria Ocasio-Cortez, aka AOC, (D-NY) and Senator Ed Markey (D-MA) quickly passed a Green New Deal Resolution laying out the blueprint of what a law to combat climate change might look like.

I ran for U.S. Congress as a Democrat the same time as AOC on the very same principles and lost my primary. I was fired up when the Green New Deal became a prominent issue. I then volunteered for Andrew Romanoff, a Colorado U.S. Senate candidate, on his environmental policy team to get the Green New Deal front and center in the No. 1 toss-up Senate race in the country. I knew there’s no time left. The future was here.

Shortly after I met the Swedish activist Greta Thunberg and her father at a climate strike in Colorado, I was listening to a podcast with Ralph Nader and David Freeman, an architect of the Environmental Protection Agency who had run the Tennessee Valley Authority under President Jimmy Carter, and had shut down eight nuclear power plants. Nader and Freeman talked about climate strikes being great but that there is a need for a bill in Congress. I immediately got in touch with someone who knew Nader and told him I would volunteer to fight for such a bill. He put me in touch with Freeman, who said he could have a bill written in days. Within a week, I flew to Washington to meet with Nader and Freeman to work on getting the bill sponsored.

In Washington I tried to find out if there might be other draft bills out there and what coalitions might be supporting them. I called the Congressional Climate Crisis Committee and asked for details about its mission. A staff person told me, “The Green New Deal Resolution led Nancy Pelosi to form the Congressional Climate Crisis Committee, a bipartisan committee without the power to adopt legislation. The committee is on a fact-finding mission, holding numerous hearings and will deliver its recommendation to Pelosi’s office in March of 2020.”

I found out there were six bills floating around but none were adequate for the size of the problem. My previous experience in politics makes me allergic to big commissions that can run out the clock and kick the can down the road.

On Capitol Hill I attended a climate crisis hearing of the Energy and Commerce Committee; and an oversight committee hearing exposing Exxon’s cover up, since the 1970s, of the effects of climate change from manmade CO2. I met with various panelists, experts and staff. What I learned was that after Pelosi received the recommendations from the Climate Crisis Committee in March, some kind of bill would be sent to the floor for a vote. This climate action bill would need to go to various committees to be marked up before a floor vote. As one staffer for a leading Democratic congressperson told me, there are progressive congresspeople who ran on this issue and would need to have something to show to their voters before the 2020 election. 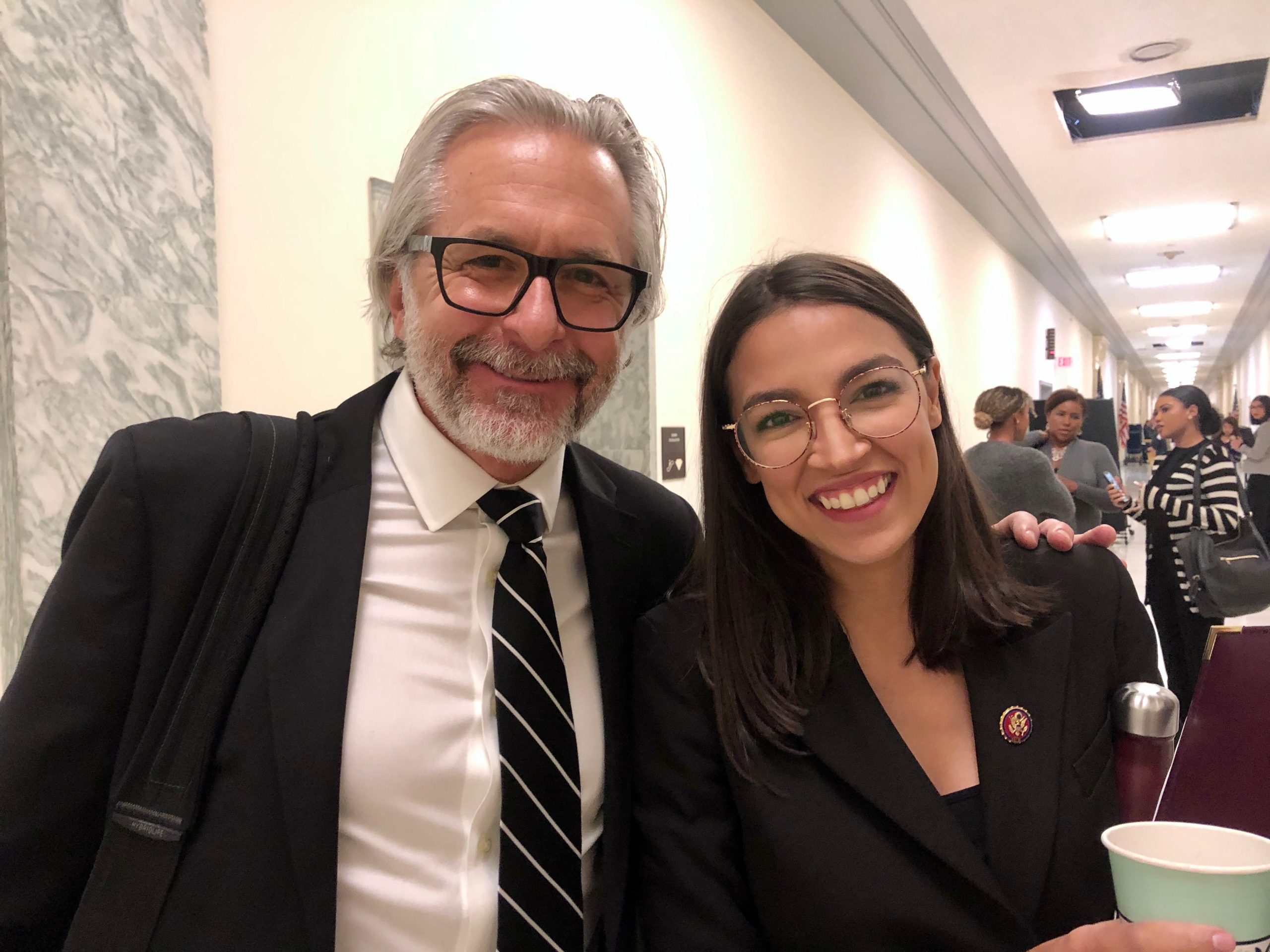 The author with Rep. Alexandria Ocasio-Cortez in Washington last month.

A bill of this kind would need to be an omnibus bill that covers a number of diverse topics such as getting utility companies off coal, gas and oil; converting cars, buses, trains, shipping, and air travel to electric; getting housing and buildings to zero emissions, and dealing with agriculture and reforestation too. That’s just some of the areas that would need to be addressed. Revenues would be needed for converting technology, training programs and creating jobs as the Green New Deal focuses on climate justice and social equality including Universal Basic Income, affordable housing, Medicare for All and sovereignty rights and indigenous lands.

But it’s anyone’s guess if it woud be one big omnibus bill or several. Congressman Ted Lieu (D-CA) has a bill that gets emissions down 80 percent by 2050 with 28 cosponsors. Sixty-eight Congresspeople are sponsoring a carbon tax bill that drives down usage by driving up the cost of using fossil fuels, thus hoping to eliminate them.

My meeting with Congressman Joe Neguse (D-CO) was encouraging at first when he said he’d be very interested in a comprehensive bill, but my follow up attempts for a meeting with him have been pushed to after the first of the year. I had a chance to meet Congresswoman Ocasio-Cortez after the Oversight Committee hearing. I asked her  whether she preferred a comprehensive bill or a smaller bill. She said, she was submitting a “subset” bill to the Climate Crisis Committee’s process with an affordable housing bill.

As of this writing Senator Bernie Sanders (I-VT) and Ocasio-Cortez have introduced a public housing bill that retrofits a million units of federally-owned housing and creates hundreds of thousands of jobs a year. They’re calling it a Green New Deal bill but it only works on a small “subset” of the building emissions problem in the U.S.

Julian Brave Noisecat, vice president of policy & strategy for Data for Progress, a think tank that supports the Green New Deal, helped Sanders and AOC with the bill. He told me, “We are talking it piece by piece, with leadership from the members and the movement. Our think tank leverages data and expertise to support. The GND is a big, big, thing. Doing it in pieces makes it easier to tell the story and build the will.”

Freeman worked up his draft bill, called the Climate Action Now Bill, to mandate fossil fuels out of existence over 20 years. He told me he thinks everyone is making this a bigger problem that it seems. “We’ve got people with 170 IQs working on a 110 IQ problem,” he said. “We need to simply mandate fossil fuels out of existence with massive capitalism.” Both he and Nader think that you must outlaw a problem, just as they did in the 1970s by banning the insecticide DDT and forcing manufactures to put scrubbers on new smokestacks to reduce air pollution.

The Carbon Action Now Bill bans fossil fuels over a 20-year period in different sectors and rewards the transition of new energy in solar, wind and water.  It contains no carbon tax and does not include nuclear power. Nader, who may have been responsible for more legislation being passed than anyone, believes climate movement leaders such as Bill McKibben and others are not up to the task at hand and that the movement should  mobilize and occupy D.C. until a climate bill is passed.

Obamacare took over two years and was 2,300 pages when it was passed into law. It needed a Democratic House, Senate and president. The Democrats aren’t aligned on a  climate related bill. What I heard on the Hill is that half the Democrats aren’t interested in going after the oil-and-gas industry.

We will continue hearing and seeing a lot of podcasts, special reports, speeches, rallies, school strikes, and Jane Fonda getting arrested in Washington, but we are unlikely to soon see a climate bill to outlaw the practices that are threatening our civilization.