“Containment” has long been a cornerstone of U.S. policy in dealing with countries that are seen as threats to U.S. interests, but today some countries are applying the same principle to the United States, observes Graham E. Fuller.

Over the years “containment” has been a key U.S. political instrument by which it has sought to isolate, starve out, or excommunicate from the “international community” regimes unwilling to accept the U.S.-dominated world order. 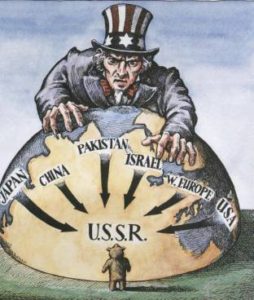 Yet the great irony today is that this very U.S. policy of containment seems now to characterize the way many major powers in the world have come to think about dealing with the United States. These countries don’t actually use the word “containment,” but the intent is still the same; they perceive the need to “contain” or constrain Washington, thereby limiting the damage that the U.S. can inflict upon their national interests without engaging in outright confrontation with the U.S.

Containment has been a reasonably sensible way of dealing with hostile states that cannot be readily defeated militarily except at potentially huge military cost to the U.S. itself—especially if it risks nuclear war. Both the Soviet Union and China for many decades were “contained” due to their perceived radical ideologies and hostility to the U.S.-dominated world order.

These two states also supported many radical leftist revolutionary movements around the world that ideologically opposed the U.S. (Often these movements had good reason to be hostile and revolutionary, frequently due to terrible domestic conditions in their own countries—and under regimes often supported by Washington. Cuba, Chile, and Nicaragua come to mind, although the U.S. eventually made efforts to overthrow them after their revolutions.)

In more recent decades the U.S. applied containment policies to Saddam’s Iraq and to Iran. Containment of North Korea has been a long-standing policy, arguably wiser than most other options. Indeed, might not continued containment of Saddam in Iraq have been the wiser policy compared to the Pandora’s Box unleashed by the U.S. invasion and occupation of that country and its still unfolding wide regional fallout?

But containment also raises some searching questions. One is that once on the U.S. “containment list” it is often hard for a state to ever get off it, short of being targeted by U.S.-sponsored “regime change.”  One becomes a “rogue regime.” And the biggest problem with being “contained” is that in some ways it becomes a self-fulfilling prophesy of enduring hostility.

Since the end of the Cold War the world has come to look rather different. Among states that have attained reasonably comfortable living standards there is less appetite for confrontation or war. As a result the self-assumed US “burden of global leadership” in war and peace on the international scene is seen as a less desirable commodity than before.

Hence fewer nations and peoples are willing to risk the potential war that US “leadership” might today bring about—in Korea, in Europe vis-a-vis NATO’s confrontations along the Russian borders, in patrolling the straits of Taiwan, or war in Venezuela, or “maintaining the free flow of oil” in the Persian Gulf (when such free flow has almost never been challenged.)

Increasing numbers of international polls over the years suggest that the populations of many countries in the world have now come to view the U.S. itself as one of the biggest threats to global peace. The U.S.—almost continually at war somewhere since the fall of the USSR—increasingly gravitates towards military approaches to handling global crises. Even before Trump’s presidency U.S. diplomacy has grown ever weaker in the face of rising U.S. regional military commands that dwarf the authority and skills of our ambassadors abroad. The commander of US AFRICOM, for example, presides over a massive military budget and effectively represents the dominant voice of U.S. policy in Africa. These institutionalized military resources dwarf the financial and political power of any single U.S. ambassador in any African country. No wonder such maldistribution of U.S. power abroad leads to an enhanced consideration of military solutions over political or diplomatic ones.

In today’s rapidly shifting world scene the US is arguably more upset than any other major country by the nature and speed of strategic global shifts in power. Blame games are rife in Washington. The U.S. had grown used to being in the driver’s seat of the world order that it engineered since the end of World War II. It seems almost inconceivable to most Americans—and to some foreigners who grew up in that same environment—to imagine a world in which the U.S. is no longer the architect or the supreme arbiter of that global order.

This shift thus generates serious anxieties in Washington over its (relatively) declining power. These anxieties lead to a constant need to publicly reinforce at home and abroad the belief that U.S. power has indeed not slipped at all. The U.S. increasingly invokes the argument that military action is required somewhere, if for nothing else than “to maintain U.S. credibility.”

In short, if you don’t act, however unwise such action might be, you might be broadcasting weakness and no longer representing a credible “commitment.”  Hence we move into the seventeenth year of war in Afghanistan. This is all part of the great danger in the dangerous dance of rising and declining powers. The psychology intrinsic to both rising and declining power can be dangerous. As a result the U.S. is treated by outsiders with caution, even as perhaps a snake capable of striking out unexpectedly.

The upshot is widespread global nervousness about U.S. intentions and actions—even before Trump—and their risky or unwanted consequences. And that is why much of the world now thinks in terms of damage limitation when it anticipates more aggressive U.S. policies.

If we were then to settle on any one single description of the psychology that characterizes Chinese and Russian strategy these days it is indeed “containment” of the U.S. The EU too, for example, increasingly believes it needs to take its relations with Russia into its own hands, rather than potentially be led into a military confrontation with Russia via dubious NATO exercises on Moscow’s borders.

Supporting U.S. “credibility” is not high on the European foreign policy wish list (except understandably for those few small neighbors sadly doomed to eternal life next to the Russian Bear.) South Korean leadership too finds playing the U.S. card sometimes diplomatically useful, but posing a huge danger if Washington is actually willing to unleash war—in which Seoul has everything to lose. Indeed, the one state in the world that tends to completely support US military action almost anywhere in the world these days is Israel.

Finally, the concept of “containment” raises a deeper point about the psychology of international relations. How wise is it to maintain lists of enemy states and leaders who require containment? Few other states do so, partially because declaring another state to be an enemy has obvious negative consequences that easily lead to self-fulfilling prophecy. This phenomenon is fundamental to the very psychology of human relationships. If we signal to someone that we consider them a threat or an enemy, the chances are very good that the other party will reciprocate and that mutual relations will predictably deteriorate. That is why shrewd “good neighbor policies” represent more than just naive feel-goodism. Yet the U.S. still spends a great deal of time drawing up and announcing lists of who is an enemy, or a rival, and who must be punished or contained.

For better or for worse, the international order of the late 20th century is gone. In a period of major strategic change the United States seems determined to cling to the status quo that so long favored it. Yet it might be wise for Washington to stop yearning for it—and for all the trouble that now offers. Perhaps rather than the endless search for enemies (”dragons to slay abroad”) that is the daily stuff of most Washington strategists and think tanks, a determination to adjust to and find common cause with new world powers would yield somewhat more desirable results all around.

Graham E. Fuller is a former senior CIA official, author of numerous books on the Muslim World; his latest book is “Breaking Faith: A novel of espionage and an American’s crisis of conscience in Pakistan.” (Amazon, Kindle) This article originally appeared at his blog, grahamefuller.com. Reprinted with permission.

64 comments for “Who is Containing Whom?”