In this call to action, Dan Maguire argues that non-voters and “vote-and-run” citizens are enabling vicious agendas to be carried out.

In Donald Trump’s so-called Electoral College triumph – which, a year into his presidency, he still cannot resist bragging about – he received votes from fewer than 25 percent of eligible voters. 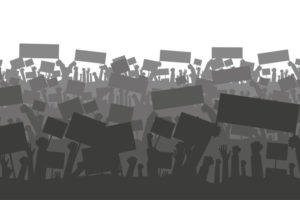 That indicting statistic points to two kinds of citizen depravity: (1) citizens who do not vote, who cravenly surrender their power to those who do vote.  Voting is an act of social justice, a citizen’s minimal duty to the common good. Those who don’t vote are therefore unjust, immoral, and only half alive. (2) Vote-and-run citizens.  These citizens make the little effort to vote, and then drop dead politically.  No follow up.  No participation.  Pop the bubbly when Obama wins, and then hang him out to dry.

Voting without follow-up participation in politics is a symbolic, feel-good activity.  The predatory one percent have nothing to fear from vote-and-run citizens.

The old Roman Juvenal said that all that is needed to sucker the people into passivity is “bread and circus.”  Pizza, beer, and football for some: latte, escargot and golf for others.  All good things in their place as long as you are staying morally alive, i.e. a citizen in motion.

If you are not morally defunct, some issues engage you.  Decide on three, or four, or five issues and there are a plethora of fully and delightfully alive citizen groups who will tell you basic good things you can do. Groups such as MoveOn, Code Pink, Ultraviolet, Jewish Voice for Peace, Greenpeace, League of Women’s Voters, National Coalition on Health Care, Black Lives Matter, Black Student Movement, Sierra Club, and many more. They are as close as your smart phone or your dumb phone.

Contact them and feel the elixir that comes when hope and action kiss.

Put some alternate press into your reading diet to prevent intellectual anemia.  The “mainstream press” get locked into occlusive, self-interested, semi-blind orthodoxies.

Non-voters and vote-and-run voters have no complaining rights. The current form of the Republican Party is totally and sordidly corrupt, unlike earlier Republicans who fought slavery, created national parks, supported women’s reproductive rights, and supported union rights in places like Wisconsin.

Inactive citizens underwrite the Republicans’ vicious agenda as these mean-spirited folks take food stamps and health care from poor kids and their parents, give tax breaks to fat cats, stupidly prefer kill-power to diplomacy, and ignore climate disasters even as these disasters are right now crashing around us and around the world.  Don’t complain, non-voters and vote-and-run voters.  You’re complicit with the “Republican base.”

There is something despicable about non-voting and vote-and-run citizens.  The Book of Revelations trashes their ilk in language our bravest pundits would timidly eschew:

Overblown rhetoric?  Histrionic overkill? Not when guilty inertia underwrites well advanced ecological suicide and the trashing of the poor by the rich in gorge mode.

Dan Maguire is Professor of Theology at Marquette University.

72 comments for “A Call to Action against Citizen Apathy”