The Harvey Weinstein scandal has forced the ugly practice of sexual harassment into the public square, where private companies have proven to be more responsive than the political world, reports David Marks.

The multiple sexual-harassment allegations against movie producer Harvey Weinstein have sent tremors around the world with newly expressed outrage toward the machismo atmosphere of the film industry and other work environments, including the news business and politics.

Clearly, the problem reaches far beyond Weinstein. Allegations and lawsuits filed against Donald Trump mirror the worst of Weinstein’s behavior. Trump’s hot-mic 2004 interview with “Access Hollywood” surfaced during last year’s campaign, with him bragging about his ability to get away with aggressively kissing women and grabbing their genitals: “When you’re a star, they let you do it. You can do anything. … Grab ’em by the pussy. You can do anything.”

But even that wasn’t enough to keep 63 million Americans from voting for Trump and putting him in the White House, although that was in part because many voters saw no moral superiority in Hillary Clinton, who not only disparaged women who complained about sexual harassment by her husband but who enthusiastically embraced war as a ready option for U.S. foreign policy.

Yet, while the political careers of Donald Trump and Bill Clinton survived disclosures of their predatory behavior, Weinstein’s movie empire quickly crumbled after a number of women came forward with accounts of how he used his power to gain sexual favors. Several prominent news personalities, from Bill O’Reilly at Fox to Michael Oreskes at NPR, have lost their jobs, too, amid other sexual harassment complaints.

Oddly, it seems that private industry is now more sensitive to allegations of this kind of sexual misconduct than the American political process, possibly because of the potential legal liabilities for companies as well as the organized partisan defenses that are immediately raised around the highest-level national leaders even when there’s clear evidence of their predatory behavior. While it’s true that some members of Congress have lost seats because of sexual misconduct, the situation has been different at the presidential level.

After Trump’s “grab ‘em by the pussy” boast became public, his Republican “base” rallied around him and prevented the expected collapse of his poll numbers. Similarly, in the 1990s, when Democratic presidential candidate (and later President) Bill Clinton was accused of predatory sexual activity with female subordinates and other vulnerable women, loyal Democrats sprang to his defense and challenged the veracity of the accusers. The Clinton team complained about “cash for trash.”

Even earlier, rumors about President George H.W. Bush’s extramarital activities and a fondness for groping unsuspecting women were brushed aside as yellow journalism that should not be taken seriously about so honorable a man. Only recently – in the wake of the Weinstein scandal and more women denouncing boorish male behavior – was Bush pushed into apologizing for inappropriately grabbing women as the punch line to a joke about who his favorite magician is: “David Cop-a-Feel!” 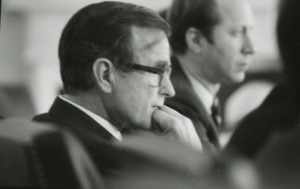 It seems that the most powerful leaders, both in industry and government, are often the most aggressive predators; both on a personal level and with how they affect the social fabric of the country through their professional actions. There are parallels between the pattern of sexual harassment, in which the historical tendency was for women to stay silent, and the U.S. government’s military assaults abroad, which most Americans tolerate as somehow necessary or inevitable.

President George W. Bush inflicted “shock and awe” on Iraq, touching off the slaughter of hundreds of thousands of Iraqis and the destabilization of the entire region yet he is now treated as a respected elder statesman when he criticizes Trump’s behavior. President Barack Obama authorized military operations in seven countries, including interventions in Libya and Syria that contributed to other humanitarian disasters, but Obama faced little public outrage among the American people for these actions.

President Trump appears to have learned from his predecessors that he can boost his sagging poll numbers by threatening and launching military strikes. He’ll also win some grudging acceptance from the elites of Official Washington who never seem to see a potential war that they don’t want to send the U.S. military to fight. In April, Trump got some brief relief from the Russia-gate “scandal” after he ordered the firing of 59 Tomahawk missiles at Syria in a hasty reaction to a dubious chemical weapons incident that he blamed on the Syrian government.

Trump played the tough-guy again on Sept. 19 with a bellicose speech to the United Nations General Assembly, threatening hostilities against North Korea, Iran, Cuba and Venezuela and boasting about his plan to escalate the 16-year-old war in Afghanistan. Despite America’s recent history of aggressive war – not to mention historical crimes of genocide, slavery and imperialism – many Americans still profess how morally superior we are to other people.

Any American who dares challenge this “American exceptionalism” can expect to face ostracism much as women who complained about unwanted sexual advances by male bosses in years past could expect to be categorized as troublesome and unfit for professional advancement. That could be especially true in a highly subjective profession like acting. 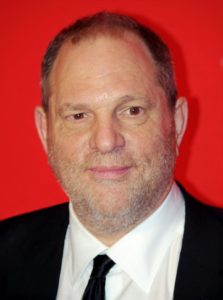 Yet, whether it’s Hollywood’s “casting couch” or Official Washington’s actions on the international “stage,” it remains difficult to stop predatory behavior. When a culture of male dominance looms in every direction, it is a rare individual who will defy convention – even a morally bereft convention – and do what’s right. That’s especially true when the almost certain result will be loss of friends and loss of income. We have seen plenty of cases in which even women will make excuses for male misconduct, whether involving sex or war, as Hillary Clinton has shown.

But a culture that tolerates various forms of abusive and predatory behavior, whether it’s silence amid a culture of sexual harassment or blind patriotism toward dubiously justified wars, has lost its moral compass. A democracy that in principle embraces the equality of all with everyone possessing unalienable rights, including life, liberty and the pursuit of happiness, would have no tolerance for predators of any kind, whether at home, in the workplace or in warfare across the globe.

David Marks is a veteran documentary filmmaker and investigative reporter. His work includes films for the BBC, including Nazi Gold, on the role of Switzerland in WWII and biographies of Jimi Hendrix and Frank Sinatra.

← The Dangerous Business of Journalism
Trump and Democrats Misread Mandates →

55 comments for “The Politics of Sexual Harassment and War”