Native American activist Dennis Banks, who died Oct. 29 at 80, leaves behind a legacy that includes a reenergized movement that reminded America of its original sins of genocide and deceit, as Dennis J Bernstein reports.

Noted civil rights activist Dennis J. Banks, who co-founded the American Indian Movement and championed indigenous rights in the face of continuing oppression of Native Americans, died on Oct. 29 in his native Minnesota. He was 80 years old. 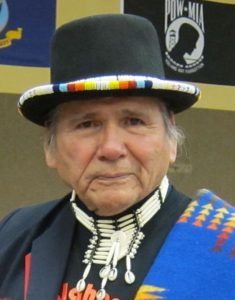 Native American activist Dennis Banks being honored at a ceremony in 2013. (Wikipedia)

Banks was born dirt poor on the Leech Lake Indian Reservation of the Ojibwa Tribe in northern Minnesota.  He grew up impoverished in a home with no electricity, running water or indoor plumbing, not uncommon for American Indians. Like many native children, at the age of five, Banks was forced to go to a boarding school run by the Bureau of Indian Affairs (BIA), which was meant to “civilize” the children. Banks later compared the schools to “concentration camps” for the cruel and inhumane way they treated the native children.

Banks moved to the Minneapolis-St. Paul area in 1966, after he was discharged from the U.S. military. There he was sent to prison for stealing groceries and other necessities to feed his family, he said.

While in prison, Banks founded the American Indian Movement, or AIM, with other jailed Native Americans. AIM, as it came to be known, became one of the most important and influential activist groups at the height of the civil rights movement.

The 72-day militant protest against tribal leaders accused them and the entire U.S. Bureau of Indian Affairs of widespread corruption. Wounded Knee had been the site of an 1890 massacre of more than 300 Oglala Lakota men, women and children by U.S. Cavalry troops.

The Feds charged Banks and another AIM leader, Russell Means, with conspiracy and other offenses related to the siege. The charges were ultimately dismissed.

Dennis Bernstein: We are so sorry to hear about the passing of Dennis J. Banks.  Maybe you could help us understand Dennis’ place in the world of resistance and standing our ground.

Bill Means: I was thinking back to when I first met Dennis.  It was as a soldier coming back from Vietnam. My brother and my mother were at a conference in San Francisco and invited me to come.  I was amazed that people in the Indian community were getting together to organize behind various issues such as treaty rights, fighting the extractive industries, and exposing health conditions on the reservations.

We took a day trip to Alcatraz, which was being occupied at the time, and that is where I met Dennis Banks.  Alcatraz was one of the sparks that lit the fire of Indian resistance and indigenous movements throughout the world.  The Alcatraz event was started by Bay Area institutions, including students at San Francisco State and Lehman Brightman’s organization, United Native Americans.  The Bay Area is well known for very creative movements aimed at self-determination.

At the time, I couldn’t wait to get out of this uniform and become a part of this movement.  From the time of my discharge six months later, the only thing on my mind was how I could get with the AIM people, finish my college education, and help organize what was going on with various actions in the Dakotas and Minnesota.

Dennis Bernstein: Talk about Wounded Knee and how you brought history up to date in the 1970’s.

Bill Means:  AIM had been leading the fight against racism in South Dakota, including the death of a young man named Raymond Yellow Thunder in the city of Gordon, Nebraska.  There has always been a very tense relationship between Indians and these border towns that surround reservations.  The mistreatment of Indians was not unlike what was happening in the South with African Americans. 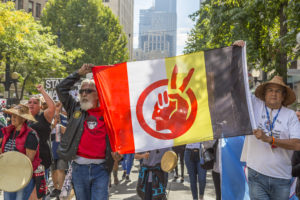 Activists carry the American Indian Movement flag at a protest against the Dakota Access Pipeline in Seattle, WA on Sep. 16, 2016. (Flickr John Duffy)

As the Civil Rights Movement grew, so did the Indian Rights Movement.  We were fighting for our civil rights from the perspective of treaty rights.  Unlike any other minority in the country, we had a political and legal relationship with the United States government which was on the level of nation-to-nation rather than state rights.  The states had always trampled on our rights.  That is how they formed, by taking Indian land.

We had always been fighting against extractive industries, whether it was gold, uranium, coal or oil.  However, when Raymond Yellow Thunder was killed, it had to do directly with racism and the treatment of Indians.  He was dragged into an American Legion club on a Saturday night and became entertainment for the White ranchers and farmers that lived in that area.  Three days later he was found beaten to death in the trunk of a car.

For at least a week, no one was charged with his death.  His family came to the American Indian Movement in Omaha and told us that they had been to the BIA, the FBI, the US Marshals, and nobody would help them.  We took a caravan from Omaha to the Pine Ridge Reservation.  Two days later we marched on Gordon and held the town for about two days.  They finally brought to trial two brothers, who got two years apiece.  In the end, they served a little over a year, for conspiring to kill an Indian person.  AIM was in the forefront in fighting racism and bringing to national attention this type of incident where Indian deaths go unpunished.

In 1972 we went to the BIA headquarters.  We had developed what we called a twenty-point solution paper and went to Washington D.C., where we were supposed to meet with various state delegations to the national congress.  When we got there, the government cancelled all of these meetings.  We then took over the BIA for about seven days, and nobody missed it!  We showed that the BIA was one of the most inefficient bureaucracies in the United States, where 80% of their budget went for administrative costs.

About a year later, we went to Wounded Knee.  A delegation of Oglalas came to AIM and asked us to help them in their fight against the corrupt leadership of the tribal government.  The district Indians, which included mostly full-blooded Indians, were being discriminated against by the half-breeds in control of the government.  This was similar to the puppet governments in Latin America that provided resources and labor for the US.  A system of colonialism existed on the reservations.

The traditional leadership decided that we ought to go to Wounded Knee.  That was where we wouldn’t be alone, we would be with the spirits of our ancestors who were killed in the 1890 massacre.  We went to Wounded Knee to make a statement, that we stand on our treaty rights, that we are nations of people, that we have human rights, as well as civil rights.

Dennis Bernstein: Your brother, Russell Means, and Dennis Banks were indicted.  What were they accused of?  It was a very powerful trial and they were ultimately found not guilty.

Bill Means: Actually, over 500 people were charged.  I myself was charged with interfering with a federal officer, possession of Molotov cocktails, and various other charges which were all eventually dropped.

Russell and Dennis were tried separately in what were called the “leadership trials.”  They lasted for nine months, longer than any other trial in US history.  The judge finally dismissed the case because of FBI misconduct, including coercion of witnesses and illegal wiretapping.  A republican judge in South Dakota completely reversed a history of racism in the federal court of South Dakota in finding for the defendants.

Dennis Bernstein: But they somehow figured out a way to put Dennis Banks in prison for fourteen months.  How did that come about?

Bill Means: That was on state charges, which went back to before Wounded Knee.  In the town of Custer, South Dakota, there had been a major demonstration in which several public buildings were burnt to the ground and a confrontation between the police and AIM and the Oglala people following the death of a man called Wesley Bad Heart Bull who was killed in a bar by white ranchers who stabbed him over twenty-seven times.  No one was charged.  This was in January and Wounded Knee happened in February.  Dennis was tried in state court, as opposed to federal court, and he served time in state prison.

Before he was convicted, he was given asylum by Governor Jerry Brown and lived in California for two years before Brown was beaten in the next election, at which time he was exiled to a reservation in New York.  He eventually turned himself in, was tried and convicted and served his time.  He was convicted of riot and some other charges.  When the people in the courtroom refused to stand for the judge, the judge ordered riot police to attack and arrest everyone refusing to stand.  And then various other charges were brought, in order to get some sort of conviction.

Dennis Bernstein: What were you standing for at Wounded Knee?  That was an amazing moment in the history of indigenous rights.  You referred to it as “a reign of terror.”

Bill Means: That was due to the oppression of the FBI, which resulted in the conviction of Leonard Peltier. But before and during Wounded Knee the issue was treaty rights: that the US government didn’t have jurisdiction on our reservations.  The treaty of 1868 said that “if there are bad men among us, they will be brought to trial.”  In a famous case, the United States finally “assumed” jurisdiction over Indians because in the early 1900’s we were not citizens of the United States.  At Wounded Knee we were bringing up our treaty rights, that we were not under US jurisdiction.

Dennis Bernstein: What exactly was the “reign of terror”?

Bill Means:  After Wounded Knee, the number of FBI agents in western South Dakota went from three to over a hundred.  All these FBI agents descended on the Pine Ridge Reservation.  They said they were looking for guns and fugitives.  They proceeded to terrorize Indian people by breaking down the doors of people’s homes, dragging out women and children and the elderly, forcing them to lie on the ground.  They did what they wanted with Indian people, as if they were back in the times of Custer when the cavalry was in charge.

Bill Means: We used to refer to South Dakota as “the Mississippi of the North.”  Then the FBI became more vicious.  They weren’t being prosecuted, they weren’t being held responsible for violating the law.  It wasn’t till the trial of Dennis Banks and Russell Means that a judge ruled that they were guilty of misconduct.

Dennis Bernstein: Toward the end, Dennis Banks was waging a battle against the diabetes epidemic within the indigenous population.  Several times he went on long walks across the United States to bring attention to various indigenous issues.  Why did he do so much walking?

Bill Means: He wanted to inform and keep people involved at the grassroots.  He was the voice of the grassroots.  He went on these walks to keep the presence, the spirit of AIM, alive in the hearts and minds of local people.  Dennis was an amazing organizer, never quitting, never stopping, always at the front line.

13 comments for “The Legacy of Dennis Banks”