Angered by criticism from desperate U.S. citizens in Puerto Rico, President Trump lashed out with threats to remove federal rescue and recovery personnel — even as the crisis grows worse, as Dennis J Bernstein reports.

Some three weeks after Hurricane Maria shredded Puerto Rico, the situation on the U.S. island territory remains grave with only about 10 percent of Puerto Rico’s residents having electricity, according to the Puerto Rico Electric Power Authority. Meanwhile, thousands of people remain in packed shelters in San Juan. 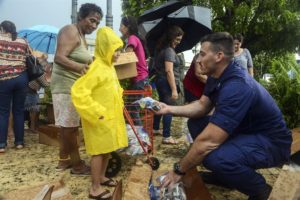 Health and public officials now worry about a developing public health crisis with outbreaks of several deadly water and airborne diseases that have not plagued the island for years, including four confirmed cases of Leptospirosis, a rat urine-borne disease that can be deadly. The death toll has risen to about 50 although a precise count is difficult given the lack of telephone service in  remote areas.

On Oct. 11, I spoke with Attorney and Human Rights Activist Judith Berkan about the ongoing rescue and recovery, and the major failures on the part of the Trump Administration to deal with a very serious ongoing life and death situation.

Dennis Bernstein: Tell us about your day today. You were delivering generators?

Judith Berkan: People are organizing here like crazy, given the absence of effective official relief. We went out into the countryside today to deliver a generator, flashlights and batteries.

Dennis Bernstein: Before we get into the government failure, tell us about the situation on the ground and the other kinds of actions taken by people who obviously realize that there is racism at play and the federal government is out of town.

Judith Berkan: In some ways it has gotten a little worse than when we spoke last week. The electrical power, which was beginning to come on at a very slow rate, has now basically collapsed again. Virtually no one has power.

The other thing that has changed is that we are beginning to see in concrete ways a public health crisis developing. We have four confirmed cases of Leptospirosis, a rat urine-borne disease you get from being exposed to water or mud and which must be treated very early or it is fatal. About seven other cases have been identified in four island towns. We also have mosquito-borne diseases and stagnant waters are breeding grounds for mosquitoes.

We are experiencing major problems with our hospitals. A lot of them no longer have electrical power. Everything we anticipated happening is beginning to happen. People cannot get fresh food. Asthma and other respiratory diseases are rampant. People are dying in nursery homes with limited access to power. They are rationing dialysis at most hospitals.

Apparently there is some kind of official narrative being heard in the United States that things are vastly improved, that the federal and state response has been good. This is not at all the case. The long-term effects of this storm are going to be worse than the storm itself. It is a lot worse in the countryside than it is here in San Juan, and it has been from the beginning. About half the island now has water, but the water is unsafe for drinking. Health officials are telling people to boil the water before drinking it, but no one has electricity!

There is no strategic planning and there is a sense of total chaos in coordination of services, whether it is the Red Cross or FEMA or the Coast Guard. Nobody seems to know who is supposed to do what. It is a devastating situation and I believe it is going to get worse before it gets better.

Dennis Bernstein: On the island of Vieques, people are concerned that toxins there are being scattered around by the storms.

Judith Berkan: Yes, on the offshore islands the situation is even worse. In 1942 and 1943 the US expropriated the islands and continued to bomb Vieques until 2003. There is so much toxic material still in the ground water and one of the problems with the lack of sanitation is that the toxins tend to propagate.

Another issue is that we have had extraordinarily heavy rains in the last three days, which has caused flooding because the waterways are full of debris. There hasn’t been a cleanup since Irma.

Dennis Bernstein: For a brief moment there seemed to be some hope with the suspension of the Jones Act.

Judith Berkan: The Jones Act was a 1920’s statute that was passed largely to benefit the US shipping industry. What it says is that, if you are going to ship anything from US ports to Puerto Rico, you have to do it on US flag ships staffed by US crews. This makes everything much more expensive in Puerto Rico. There are some relief groups in the States who made contact with foreign flag ships to send supplies down here but cannot anymore.

Today it was reported that Trump has proposed to Congress a $4.9 billion loan to Puerto Rico. This is quite remarkable because Puerto Rico is in a desperate situation with our debt and all we need now is to get more into debt! Right now there is talk that the Puerto Rican government will not be able to meet any payments after October.

Dennis Bernstein: Tell us something about the people’s reaction to this devastating crisis.

Judith Berkan: People are taking collective actions which are real models for what Puerto Rico may look like in the future, as a self-sustaining country rather than a dependant colony. You see it in casual ways, with neighbors coming with machetes to help other neighbors, people checking up on each other, on the elderly.

But you also see a lot of new organizational activity. It is collective activity to make sure that people’s needs are met: delivering generators, delivering water, doing censuses of people’s needs, taking people out of dangerous situations, making sure they get medical care. It is a very egalitarian and democratic way of doing things.

There are some agricultural collectives who are trying to figure out how to get fresh food out to people. There are medical collectives offering free medical services. There is a marvelous sense of community. You walk around the streets and talk to strangers, you figure out what people’s needs are, you share experiences.

Before this there had been a gradual process of more alienation, more dependence on electronic devices, on fossil fuels. All that served to break with what was remarkable about Puerto Rican society, which was its sense of collective well-being.

We know we cannot rely on the government anymore. We used to demand things of the government but at this point we don’t expect anything. In Washington, we currently have a particularly racist government in power. But there is a long history of colonial relationship in which all economic structure was developed to meet the needs of imperial power. It has been exacerbated with the current administration and there is clearly no interest in making sure the most basic needs are met.

Dennis Bernstein: We now have FEMA picking up where the president left off, in terms of insulting the mayor of San Juan and other local politicians, blaming you and making believe that the oppressed are responsible.

Judith Berkan: And you have to understand that our market system is based on the US market system and we pay for services like FEMA. Our current statehood government is trying to paint a rosy picture in order to curry favor with the administration, which is boasting about how great conditions are in Puerto Rico.

In some ways we are making progress, but the entire island is basically without power. Right now the official death count is 44 and there are 113 people still missing. There has been a spike in suicides. The situation is dire, people are suffering.