Although the media trashed Donald Trump’s inaugural address as radical and scary to the United States and the world, his views on American security policy nevertheless may be closest to that of the nation’s founders than those of any U.S. president since the early 1800s.

In his speech, the new president pledged that, “We do not seek to impose our way of life on anyone, but rather to let it shine as an example for everyone to follow.”

After George W. Bush’s disastrous invasion of Iraq for no good reason and Barack Obama’s military overthrow of Muammar Gaddafi in Libya, which also resulted in chaos and an increase in terrorism, U.S. re-adoption of its long abandoned foreign policy of being a “shining city on a hill,” if put into practice, would be a refreshing return to the founders’ vision.

Thus, Trump seemed to pledge less U.S. military intervention abroad while still defending the United States. He noted that “we’ve defended other nation’s borders while refusing to defend our own.” And he complained that the United States has “spent trillions of dollars overseas,” including on the armies of other countries, “while America’s infrastructure has fallen into disrepair and decay.”

All of this factually true. For example, the United States alone accounts for 75 percent of the defense spending of the 28 mostly well-to-do countries of NATO, making it a very one-way street in terms of alliance costs and benefits.

Yet as the 9/11 attacks were occurring, the U.S. military — which has been geared to be an offensive force to project American power overseas to police the world rather than to be a force to defend the United States — scrambled jets and sent them ineffectually out over the ocean. In contrast, Trump promised to focus on eradicating the genuine threat to the United States of radical Islamic terrorism.

Because the founders wanted to avoid the militarism of Europe’s monarchs, who continuously waged war with the costs in blood and treasure falling on their people, the U.S. Constitution authorizes the government only to “provide for the common defence.” 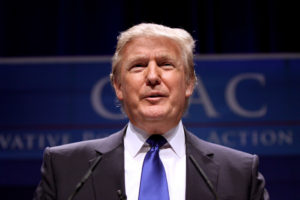 So maybe Trump’s inaugural address failed to unify the Western alliance and even scared the United States’ wealthy free-loading allies. So be it; the platitude of invoking the need to “unify” is often a way to beat back uncomfortable but necessary threats to reform the status quo.

Trump was correct when he earlier labeled NATO “obsolete,” because it wasn’t a very effective vehicle for addressing terrorism, and when he accused allied nations of not paying their fair share for Western security.

And nations around the world may be alarmed that the United States will no longer spend truckloads of money attempting to solve their problems — but usually abysmally failing — by using counterproductive military intervention or feckless foreign aid.

Trump’s inaugural address demonstrated that shaking things up was not just campaign rhetoric. Doing so in America’s failed security policy is long overdue.

Ivan Eland is Senior Fellow and Director of the Center on Peace & Liberty at the Independent Institute. Dr. Eland is a graduate of Iowa State University and received an M.B.A. in applied economics and Ph.D. in national security policy from George Washington University. He spent 15 years working for Congress on national security issues, including stints as an investigator for the House Foreign Affairs Committee and Principal Defense Analyst at the Congressional Budget Office. [This article first appeared as a blog post at Huffington Post.]