Not that political corruption doesn’t happen with divided government, but with Republicans controlling all three branches, the prospects for more Abramoff-type scandals rise, warn Bill Moyers and Michael Winship.

Mark Twain noted that man is the only animal that blushes — or needs to. He also believed that “public office is private graft.” Those two observations from our greatest and most sagacious humorist intersected with a bang on Capitol Hill Monday night, when the bright lights of the Republican House Conference met in secret behind closed doors at the end of the New Year’s holiday.

They tried to vote themselves an especially tasty treat: eviscerating the independent Office of Congressional Ethics (OCE). That’s the office created in 2008 in the wake of the Jack Abramoff scandal and the placement of three congressmen behind bars. The conference voted to absorb it into the House Ethics Committee. In other words, they wanted to weaken OCE and put it under the control of some of the very folks the office is charged with investigating for possible influence peddling and other assorted mischief.

If the conference had its way, OCE would wind up having all the clout of the token student representative on your local board of education, giving unscrupulous legislators freedom to rob the public blind without fear of exposure.

But a funny thing happened on the way to congressional visions of new secret bank accounts in the Cayman Islands. The public can become like sheep when the shepherd is a demagogue, but when the public is outraged over outright unfairness and chicanery, it can roar like a lion. Once word of the vote leaked out, phone calls, emails and social media recriminations from all points of the political spectrum began flooding the sacred halls of the House of Representatives, which was once called The People’s House before it became the predator’s lair.

Talk about embarrassment. Imagine this new Congress, pledged to “drain the swamp,” taking as its first action a rule that in effect would have helped make the swamp part of the National Park Service.

The nonpartisan Project in Government Oversight (POGO), declared that OCE needed “to be strengthened and expanded — not taken out back and shot in the middle of the night.” So the GOP conference fled into another closed-door session and changed its mind. We were only kidding, they said. The Office of Congressional Ethics is alive and well — until the next time we try to kill it.

Just before the meeting, our august President-elect bestowed the Congress with two of his imperial tweets. “With all that Congress has to work on, do they really have to make the weakening of the Independent Ethics Watchdog, as unfair as it,” read the first, followed by, “… may be, their number one act and priority. Focus on tax reform, healthcare and so many other things of far greater importance! ?#DTS.”

DTS stands for Drain the Swamp, of course, although we’re sure many of our progressive brethren would prefer bawdier acronyms involving the President-elect himself. Nonetheless, many are claiming it was these very dispatches from fearless leader that turned the vote around. But read his words carefully: He’s more concerned about bad timing; he has no great love for the OCE.

In fact, shortly before the tweets, his amanuensis Kellyanne Conway was telling George Stephanopoulos on Good Morning America that “gutting it doesn’t mean there won’t be a mechanism” – just that there had been “overzealousness in some of the processes over the years.”

Most members of the House agree it was the public outcry that swiveled those usually obdurate minds on Capitol Hill; Trump merely once again displayed his ability to jump on the prevailing public sentiment or someone else’s success and ride it to vainglory, like the story of the French revolutionary John F. Kennedy liked to tell: There go my people, the revolutionary said. I must find out their destination so I can lead them.

In the end, what this New Year’s imbroglio tells us is three things. First, it’s a reminder once again of the mediocre caliber of too many of the men and women running for the House and Senate these days. 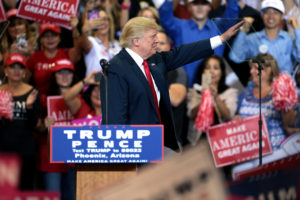 All too often, people of public spirit who would make ideal candidates are discouraged from running by the horrors of perpetual fundraising — the vise of money in politics — not to mention the spotlight shone on every small detail of their personal and professional lives. Many of the people who wind up taking the bit and running are soulless empty suits, in it for the power and the payoffs during and after tenure. Or they’re already rich in the first place.

Which leads us to the second thing: venality, so often hand-in-hand with mediocrity. All indications are that our incoming president regards the White House as a pirate galleon built to increase his family’s trove of plunder many fold, and the notion seems to be rubbing off on Congress. New York Times columnist Frank Bruni asked, “Is it any wonder that House Republicans felt OK about trying to slip free of some of their own ethical shackles, no matter how ugly the optics? …

“It’s the tone that Trump has set and the culture that he’s creating. He operates with an in-your-face defiance, so these House Republicans did, too. He puts his own desires and comfort first, so they reserved the right to do the same. With more than a few of his Cabinet picks, he demonstrated little sense of fidelity to what he promised voters and even less concern about appearances. House Republicans decided to treat themselves to a taste of that freedom.”

Third, we have to keep ever vigilant. Other anti-democratic measures inserted in the same rules package slipped past the public. The first imposes a fine on House members taking photos or video in the chamber — a petty, vindictive, retroactive slap to those lawmakers who last June sat-in to protest Congress’ refusal to take action on gun control. You’ll recall that after Republicans quickly adjourned and cut off the C-SPAN cameras, the protesting members, led by Rep. John Lewis, the civil rights legend, used their cell phones to send out video and keep the story alive.

Even worse, the new rules allow not just members of Congress to subpoena and question officials and citizens; it extends that fearsome power to staff members, opening the door to witch hunts and persecutions that could make Benghazi and Clinton’s emails seem like a stroll in the park. Rep. Louise Slaughter, D-New York, ranking member of the House Rules Committee, said, “Freely handing out the power to compel any American to appear, sit in a room, and answer staff’s invasive questions on the record — without members even being required to be present — is truly unprecedented, unwarranted and offensive.”

Every battle won’t be won. Nonetheless, the public DID manage to keep the House GOP from surreptitiously murdering the Office of Congressional Ethics, and that’s proof we can make a difference if we keep the pressure on and hammer home our resistance and opposition when democracy and liberty are threatened.

The problem, neatly summarized as usual by Mark Twain, is that, “To lodge all power in one party and keep it there is to insure bad government and the sure and gradual deterioration of the public morals.” This week, we got a vigorous, healthy and inspiring reminder that protest matters. Keep that in mind as the perfidies unfold this year under the one-party monopoly that will soon control our federal government.

Michael Winship is the Emmy Award-winning senior writer of Moyers & Company and BillMoyers.com, and a former senior writing fellow at the policy and advocacy group Demos. Follow him on Twitter at @MichaelWinship. Bill Moyers is the managing editor of Moyers & Company and BillMoyers.com. [This article originally appeared at http://billmoyers.com/story/protest-stopped-predators-will-back/]

12 comments for “Resisting the Congressional Watchdog”