Useful perspective on issues surrounding the nomination of the retired Marine Corps general James Mattis to be Secretary of Defense, including the issue of civilian control of the military, can come from reflecting on the career of the one other general ever to be U.S. Defense Secretary.

Whether the appointment of Mattis turns out to be good or bad will depend as well on other things, but for comparison and context, consider the role and talents of the third Secretary of Defense, George C. Marshall. (After World War II, a reorganization transformed the Department of War, which had existed since 1789, into the Department of Defense.) 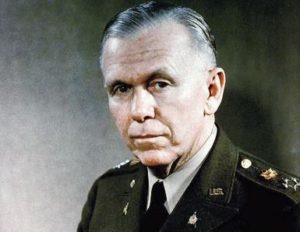 Gen. George Marshall, who also served as secretaries of State and Defense.

Marshall had a career as an Army officer but, apart from 18 months as a second lieutenant of infantry during the insurgency in the Philippines that followed the Spanish-American War, he rose to five-star general without ever commanding troops in combat. He instead was a brilliant planner and organizer.

During World War I, he was a staff officer who was heavily involved in the planning of operations for the American Expeditionary Force. As Army chief of staff throughout World War II, Marshall could be said to have managed the enormous allied war effort as much as any one person did. This was one of two roles that earned him a distinguished place in history.

His other big role was as a post-war diplomat, beginning when President Harry Truman dispatched him to China to try to arrange a political settlement between the Chinese Nationalists and Communists. He served as Truman’s Secretary of State during the critical years of the beginning of the Cold War, from 1947 to 1949. It was during his tenure in that office that he led implementation of the economic recovery program that bears his name — work for which he would receive the Nobel Peace Prize in 1953.

Marshall’s service as Defense Secretary (following a stint as president of the American National Red Cross) thus came after he had already been one of the most prominent members of the Truman administration and a diplomat of world-class stature and accomplishment.

Truman’s calling of Marshall back to his administration to be Secretary of Defense was a short-term (Marshall served in the position for only a year) fix to a problem of bad morale and organization in the U.S. military establishment. The job of Secretary of Defense, which had been established in 1947, had not yet enjoyed a leader who would set a strong and positive model for future occupants of the office.

Truman removed each of his first two secretaries of defense (James Forrestal and Louis Johnson) after just a year and a half in the job. Marshall took the position at the low point of September 1950, after three months of the United States reeling from the North Korean invasion that began the Korean War.

As secretary, Marshall was involved in one of the best-known assertions of civilian control of the military: Truman’s firing of an insubordinate Douglas MacArthur, an action in which Marshall concurred. With that personnel problem resolved and the tide turned in Korea, Marshall retired to private life in September 1951.

In short, Marshall is not a precedent for the Mattis appointment except in the technical sense of having once worn stars on his shoulders. Putting Mattis in the job really would be a departure, in that he is at short remove from being a warrior and has had nothing like the career that Marshall had when he took over leadership of the Pentagon.

It is with good reason that the high school in Fairfax County, Virginia that is named after Marshall calls its athletic teams the Statesmen.

← A Protest Victory at Standing Rock
The Werewolves Who Hated Castro →

23 comments for “Why Gen. Mattis Is No Gen. Marshall”