One of the most awkward interviews I ever conducted in my life was with Marie La Guardia, widow of the late three-term mayor of New York City, the legendary Fiorello H. La Guardia. She was 86 at the time. I was researching a project about her husband and arrived at her home in Bronxville, New York, with several pages of questions about Fiorello and their life together.

Despite all those pages, our conversation was over in about 15 minutes because to each one of my many queries her answer was “Yes,” No,” or “I don’t remember,” even when I tried to follow up. 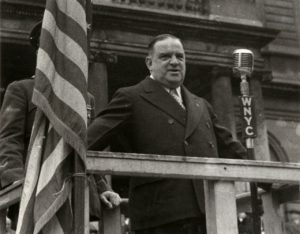 One exception: I asked her if she remembered when she and her husband entertained Britain’s King George VI and his wife in 1939. “Yes,” she replied. “Can you tell me more?” I asked. “It was nice,” she said. And that was that. I left the house, dripping in flop sweat as I walked back to the car.

The New York Times spoke with her a year or so after my failed chat and seemed to have had much the same experience. But the reporter did elicit this comparatively voluble response from her about Fiorello: “I was always kind of crazy about him,” she said. “Oh, I don’t have to tell you what kind of guy he was. Everyone knows what kind of guy he was.”

The kind of guy he was and how she felt about him comes through loud and clear in a current revival of the Pulitzer Prize-winning musical Fiorello! Produced by the Berkshire Theatre Group from Massachusetts, it’s being staged here in Manhattan at the Classic Stage Company, but only through Oct. 7.

The cast is young and energetic and the songs, by the gifted Jerry Bock and Sheldon Harnick of Fiddler on the Roof fame (among other great shows) are tuneful and nostalgic for a time when a Republican — for that’s what La Guardia was — could be a progressive, powerful street-fighter for the people. He’s on the side of the angels, as one of the songs goes, and a supporting character says in exasperation, “He’ll help anybody!”

La Guardia’s father was a bandmaster in the U.S. Army who died from eating tainted meat sold to the military by crooked suppliers during the Spanish-American War, a tragedy that taught his son early on how business can corrupt government, getting officials to look the other way in exchange for bribes or favors.

He became a crusading lawyer, defending immigrants, striking garment workers and tenants fighting greedy landlords. Marie was his devoted secretary and assistant, becoming La Guardia’s second wife in 1929. In Fiorello!, his character shouts that “it’s time to get the garbage off the doorstep,” and rails against “heartless, misbegotten misters” and “the termites eating up our city.”

He was elected to Congress and in 1934 was sworn in as the 99th mayor of New York City. Despite his Republican Party affiliation, La Guardia was an ardent New Dealer who during years of desperate poverty and unemployment helped make possible public works projects across the city, generating jobs that (in most cases) genuinely improved the urban landscape with housing and highways, parks and playgrounds.

“You cannot preach self-government and liberty to people in a starving land,” he said. “Only a well-fed, well-housed, well-schooled people can enjoy the blessings of liberty.” He was pro-labor and urged crackdowns on Wall Street plutocrats and their abuses of power.

Like our present Republican presidential candidate, La Guardia was supremely self-confident and brash, a real publicity hound who chased fire engines and conducted city orchestras. He loved strutting his stuff on the airwaves. But the similarities end there.

Unlike our current tangerine nightmare, La Guardia backed up his big talk with action and genuine concern for his constituents. And La Guardia admitted when he was wrong. He didn’t try to put the blame on anyone or anything else (as in faulty microphones, biased moderators, rigged search engine algorithms, etc.). Fiorello readily confessed, “When I make a mistake, it’s a beaut!” and the voters loved him for the candid mea culpa.

Thinking of this lack of deceit or pretense, I particularly was amused last week when a member of Donald Trump’s team tried to explain away the possibly illegal purchase of a large portrait of the businessman by the Trump Foundation, a painting that hangs in a bar at the Trump National Doral resort near Miami. The team member said that in reality, Donald was doing the foundation a favor by storing it for them. Yeah, that’s the ticket, a favor.

David A. Farenthold’s account of this in The Washington Post bears repeating. He begins with a quote: “‘There are IRS rules which specifically state that when a foundation has an item, an individual can store those items — on behalf of the foundation — in order to help it with storage costs,’ Trump adviser Boris Epshteyn said on MSNBC. ‘And that’s absolutely proper.’

“MSNBC’s Hallie Jackson pressed Epshteyn. Was he really talking about the $10,000 portrait that was recently discovered — by an Univision journalist — at the Champions Bar and Grill? ‘You’re telling me that that is storage, for Mr. Trump?’ Jackson [asked].

“‘Right, of course, he’s doing a good thing for his foundation,’ Epshteyn said.” Farenthold adds: “Tax experts were not impressed by this reasoning. “‘It’s hard to make an IRS auditor laugh,’Brett Kappel, a lawyer who advises nonprofit groups at the Akerman firm, said in an email. ‘But this would do it.'”

When bought-and-paid-for city officials are grilled as to how, on their meager salaries, they’ve been able to afford lives of luxury, they have a raft of explanations. Here’s an example of one of the questions, asked and answered:

“Mr. Z, you’re a junior official And your income’s rather low, Yet you’ve kept a dozen women in the very best hotels, Would you kindly explain how so?”

“I can see your Honor doesn’t pull his punches, And it looks a trifle fishy, I’ll admit. But for one whole week I went without my lunches, And it mounted up, your Honor, bit by bit.”

Similarly, with each preposterous lie and excuse, the falsehoods mount up and Trump and his people dig a bigger, deeper hole. And while his supporters may buy anything they’re told, we all have to hope that a sufficient number of them, on top of the percentage of the country who already know better, will get a grip and realize they’re being sold a bill of goods as ludicrous as those proverbial suckers buying the Brooklyn Bridge.

La Guardia had a simple answer to such nonsense: “Let’s drive the bums out of town,” he’d shout. And he knew that the ballot box is a good way to show them the highway.

Michael Winship is the Emmy Award-winning senior writer of Moyers & Company and BillMoyers.com, and a former senior writing fellow at the policy and advocacy group Demos. Follow him on Twitter at @MichaelWinship. [This story was originally published at http://billmoyers.com/story/la-guardias-name-boy-use-now/ ]

← Do We Really Want Nuclear War with Russia?
Making Cold War to the End of the World →