If a U.S.-backed coalition drives the Islamic State from Mosul, Iraq, before the U.S. elections, the victory could boost Hillary Clinton’s campaign and undercut Donald Trump’s criticisms, writes Joe Lauria.

The liberation of Mosul ahead of the Nov. 8 U.S. election would boost Hillary Clinton’s chances and enhance the legacy of her chief proponent, Barack Obama. As preparations continue to intensify for a major military operation to free Iraq’s second largest city from ISIS’s grip, talk here 55 miles away in Erbil is that the operation could be launched on Oct. 15.

A source who speaks regularly to residents of Mosul told me that ISIS militants have virtually disappeared from the streets of the city. Where before they were out in numbers enforcing their extreme version of Sharia law (you could be executed for smoking a cigarette), they are now hardly to be seen. The residents aren’t sure what’s going on. But it could mean ISIS fighters have begun evacuating ahead of the attack. 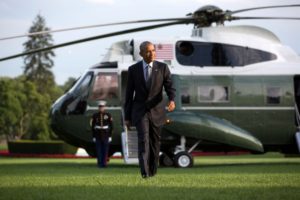 This is what happened in June when, after initial fighting, ISIS deserted Fallujah allowing the Iraqi army and Shia militias to take the city. Then last month, ISIS extremists abandoned the oil town of Qayyara, just 48 miles south of Mosul, ahead of advancing Iraqi army units. The militants released petroleum into the streets and set it on fire as they retreated.

Preparations are being made outside Erbil for an influx of refugees from Mosul that could number as many as 500,000, according to Stephen O’Brien, the U.N.’s under-secretary-general for humanitarian affairs. Another million people could flee elsewhere to the Kurdish region.

If the reports of vanished ISIS militants from the streets of Mosul are correct, occupying the city may come without the immense civilian casualties that would almost certainly result from U.S. aerial bombardments and house-to-house fighting.

Meetings among Iraqi Kurdish authorities, Baghdad officials and Americans have intensified here in the Kurdish capital and in Baghdad. The aim is to avoid a clash over who gets to control Mosul once it is taken. The city is a mix of Sunni Arabs and Kurds, as well as several other minority groups.

Relations between Baghdad and Erbil have been severely strained for several years over the control of oil and territory. The Kurds have been selling petroleum on their own through Turkey, cutting off revenue to the central government. In response Baghdad has cut off all government revenues to the region. The Kurds have long sought independence from Baghdad but have been prevented by the U.S. from going ahead with a referendum.

Kurdish peshmerga forces have been accused of seizing control of Arab majority towns that they have liberated from ISIS. Amnesty International reported that the Kurds have raised houses to prevent Arab Iraqis from returning.

The fear is that the real battle will be between Kurdish and Iraqi Army units after ISIS leaves Mosul, the biggest prize in the war to rid Iraq of the Islamic State. Such a bloody fight, especially if Mosul is taken relatively peacefully, would undermine the narrative of the Obama administration’s triumph.

A Russian orchestra performs a concert at Palmyra’s ancient Roman theater on May 5, 2016, after Syrian troops, backed by Russian air power, reclaimed the ancient city from the Islamic State. (Image from RT’s live-streaming of the event)

So the U.S. is sending 600 more troops to help coordinate logistics for the attack, U.S. Defense Secretary Ashton Carter said on Wednesday. There are already 4,400 U.S. troops throughout Iraq.

ISIS has controlled Mosul since July 2014. Where they would flee to, if they are indeed leaving the city ahead of the operation, is another issue. It could further complicate the war in neighboring Syria, whose border is less than 180 miles from Mosul, if they retreat there. Raqqah, the so-called Syrian capital of the Islamic State, is only 290 miles away.

The U.S. effort against ISIS has been focused more on Iraq than Syria. Obama announced his air war against the group when it came within a few miles of capturing Erbil in the summer of 2014. U.S. air power and the peshmerga pushed them back towards Mosul.

U.S. operations in Syria, on the other hand, have been questionable. It has appeared that the U.S. has largely left ISIS alone as it advances there. For instance, Washington did nothing to stop ISIS’s capture of Palmyra, which was liberated by the Syrian government with Russian help earlier this year.

If in fact ISIS has been allowed to play a role in Washington’s goal of “regime change” in Damascus, the influx of ISIS fighters from Iraq would put additional pressure on the Syrian government. It could also help create the conditions for the quagmire that the U.S. seems so intent on getting the Russians into.

The liberation of Mosul, especially without a fight, would be trumpeted as a major victory for the legacy of Obama’s beleaguered foreign policy and indirectly a boost for Hillary Clinton. Though she hasn’t been Secretary of State for four years, Clinton is still closely associated with Obama White House.

The expulsion of ISIS from Mosul could undermine Donald Trump’s insistent criticism of the Obama administration’s failure to deliver a knockout punch to the extremists.

9 comments for “A Victory in Mosul Could Help Clinton”