Israel’s repression of the Palestinians is often rationalized by the historical abuse of the Jews, but Israel’s misconduct is having the disturbing effect of stirring up new anti-Semitism, observes Lawrence Davidson.

It has been 71 years since the end of the Holocaust. Initially, the world took that horror as a serious lesson, and the international community created laws against acts of genocide. Those who, even after the public revelation of the Nazi killing fields, still held anti-Semitic opinions kept them to themselves, and as time passed, this particular form of bigotry seemed to be fading away.

And, indeed, that might have been its fate if it weren’t for the strange fact that some of the victims of anti-Semitism, in this case a subset of the Jews known as Zionists (those devoted to the founding of a Jewish state), proved susceptible to catching the disease of their oppressors. The Zionists took up their own form of virulent bigotry against Palestinians, and in reaction, this encouraged a new round of anti-Semitism.

It is a complicated history, but here are some of the particulars that stand out: Israel, created in 1948 in response to anti-Semitism in general and the Holocaust in particular, became the “Jewish state.” Its Zionist leaders were dedicated to the “ingathering” of all Jews into one national entity. And, before you knew it, they were attempting to ethnically cleanse Palestinians and other non-Jews from the land under Israel’s control so as to make room for this “ingathering.”

Such behavior on the part of Zionist Jews was much too reminiscent of their own historical victimization. It created a vigorous anti-Zionist reaction, not only among the Palestinians, but also among increasing numbers of enlightened Jews and others of good will. However, it also created fertile ground for isolated anti-Semites to come out of the closet, as it were, and again become publicly active.

Indeed, we now have the situation where the more anti-Palestinian the Israelis become, the more anti-Semitism they engender. Of course, the Zionists (mistaking longevity for permanence) have always claimed that anti-Semitism is an eternal quality of the Christian West, as if it were something genetic. This is nonsense, but it does allow them to maintain the claim that anti-Semitism would be an ever-growing and threatening reality regardless of their own bigoted behavior.

As an example of the kind of anti-Semitism popping up these days in the United States we can consider the case of the African-American assistant professor of rhetoric and composition Joy Karega at Oberlin College. Dr. Karega seems to be the type of personality prone to understanding the world in terms of conspiracy theories.

Unfortunately, those who understand a complex world in terms of oversimplified plots are not rare. If you are interested in learning how such a mindset can slip easily into bigotry I recommend Stephen Bronner’s The Bigot: Why Prejudice Persists (Yale University Press, 2014) 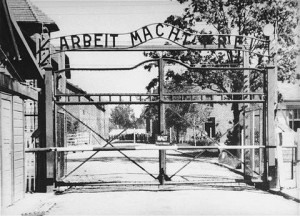 The gate into the Auschwitz death camp with the cruelly ironic motto: “Arbeit Macht Frei.”

As Joy Karega’s case makes clear, having a higher education is no guarantee against such distorted thinking. Dr. Karega has recently used Facebook and Twitter to make her theories publicly known. As it turns out, she sees Jews at the center of many such conspiracies.

For instance, according to Dr. Karega, “Rothschild”-inspired manipulators control banks, media and the U.S. government. She blames U.S.-Israeli conspiracies for the 9/11 attacks, the downing of the Malaysian airliner over the Ukraine, and terrorist attacks in France. Again, according to Dr. Karega, the “Rothschild-led banksters” are “staving off the coming global deflationary depression [by] implementing the World War III option.” While most would rightly dismiss these views as, to put it politely, less than well thought out, Dr. Karega claims they fall within the categories of “contested and controversial” knowledge.

Much of the debate resulting from these postings revolves around issues of free speech and academic freedom. Because Dr. Karega put forth her views on social media, she is covered by the First Amendment right of free speech. There is nothing illegal about what she said or how she said it. The First Amendment, however, is like an insurance policy that only partially covers you. It protects a person from government censorship. However, there are no First Amendment rights vis-a-vis nongovernmental institutions such as Oberlin College.

Yet there is still the issue of “academic freedom.” Initially, Oberlin College’s president, Marvin Krislov, characterized Dr. Karega’s statements as falling within the realm of “academic freedom” and therefore beyond the Oberlin’s ability to control. I am not sure that academic freedom is the correct category to use in this case. Apparently, Dr. Karega has made none of these conspiracy statements in Oberlin classrooms or within her published scholarly work or at academic conferences. So in what way are her social media posts “academic”?

Even if academic freedom is not applicable here, one can take the position that, as long as she maintains a strict division between these personal opinions and her academic work, Oberlin’s administration should not care about or act on what Dr. Karega says on Facebook or Twitter. That is probably President Krislov’s preferred position, but, alas, he and his school are being forced in a different direction.

In the West, including the U.S., the issue of anti-Semitism is still a highly sensitive one. For many it is seen as one of the worst examples of dangerous bigotry. That is certainly the case for those members of university and college boards of trustees – to say nothing of donors – who happen to be Jewish and/or Zionist. Oberlin is not immune to this fact.

And so, the college’s president has quickly come under pressure from the Oberlin’s trustees to get rid of Dr. Karega because she is an anti-Semitic embarrassment. On the other hand, she is popular with the college’s black student body, and they, sensitive to different African-American-centered issues, are pressuring not only for retaining her, but for her guaranteed tenure. 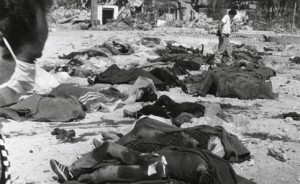 Bodies of Palestinian refugees at the Sabra camp in Lebanon, 1982. (Photo credit: U.N. Relief and Works Agency for Palestine Refugees)

President Krislov, caught between these two forces, has placed Dr. Karega on paid leave (thus removing her from the classroom) and retreated to the position that Oberlin is “required to follow established academic procedures when addressing questions regarding an individual faculty member.” In the face of this move, Dr. Karega is “deferring to her lawyer.”

In the meantime, President Krislov asserts that “our community will address the issues raised in this situation by honoring the essence of liberal arts education at Oberlin by interrogating assertions with facts and deep, critical thinking from multiple viewpoints.”

This is a good idea, particularly when it comes to the allegations of fact inherent in Dr. Karega’s conspiracy theories. A campus-wide open debate that allows accurate knowledge to be brought to bear about how banking, media and government work, what happened on 9/11, and how the Malaysian airliner was shot down, etc. ought to be able to debunk Dr. Karega’s “controversial and contested” knowledge while also showing up the flaws, foibles and often the downright corrupt way many government and corporate officials can act.

In the end, Dr. Karega will probably be bought out of Oberlin and most probably not get another academic job. However, she may make a good living, at least for a while, on the speaker’s circuit. It is unlikely that her case will settle the debate over academic freedom, anti-Semitism, and opposition to Israel’s criminal behavior.

Putting Joy Karega’s fate aside, let us also ask about the state of mind of those Zionist Jews who are ever on the watch for anti-Semites and see in Joy Karega proof that the State of Israel is still necessary to Jewish survival.

Keep in mind that instances of anti-Semitism of the sort displayed in the Karega case are isolated and do not reflect the actions of organized or institutionalized forces. They are indeed offensive and deserve to be condemned, but they do not threaten the rights of Jews as citizens of the United States.

Also, in the opinion of this writer, the charge that such cases reflect a dangerous anti-Jewish atmosphere on college campuses is wildly exaggerated.

On the other hand, as noted at the beginning of this analysis, much of this sort of anti-Semitism has been encouraged by the actions of yet another sort of bigotry that is organized and institutionalized. That is the bigotry inherent in the ideology of Zionism and the practice of ethnic cleansing by the Israeli state. This sort of bigotry does threaten the rights, and often the lives, of Palestinians living under Israeli rule.

Zionists who decry the anti-Semitism of Dr. Karega should be called out for holding obvious double standards. The protections they demand from anti-Semitic bigotry are protections they should also demand for non-Jews against Israeli bigotry. But most do not do this. They find hypocrisy a necessary cover for their own biases.

Yet by dissembling in this fashion they actually create an environment that gives license to folks like Joy Karega while simultaneously undermining the foundation upon which a college like Oberlin is built – the principles of “interrogating assertions with facts and deep, critical thinking from multiple viewpoints.”

← When Boats Brought Hope to Gaza
The Battle Over the Burkini →

40 comments for “What Israel’s Actions Have Wrought”