The United States touts its commitment to free speech but American discourse has degenerated into self-absorbed info-tainment and trivia, ignoring many of the most pressing issues of the day, writes Michael Brenner.

Freedom of speech’s centrality in civil liberties is a public as well as a private matter. After all, the point is not simply to empower persons to sound off about whatever passes through their mind or heart. Societies, for the most part, aren’t interested in speech as ad hominen self-affirmation. They are concerned about communication. That is to say, speech aimed at an audience with some degree of intent to influence how they think and potentially might act.

The two aspects of free speech too readily get mingled. In today’s discourse, they also tend to get confused. However, the issues they raise are, in fact, quite different with consequences of different orders of magnitude. 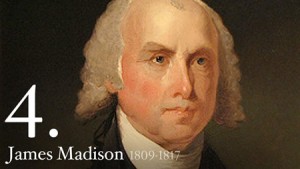 James Madison, a principal author of the U.S. Constitution and Bill of Rights — and fourth president of the United States

At the end of the day, the hullabaloo on college campuses about “warning notices” in syllabi and “safe spaces” is not going to have a serious effect on our collective existence one way or another. “Charlie Hebdo” is another matter. People are being killed because of what newspapers and journals publish. Political attitudes, and perhaps actions, are being partially shaped by it.

In another sense, the debate at some universities (e.g. Berkeley) as to whether criticism of Israel should be scrutinized for anti-Semitic meanings, too, links free speech in the form of political commentary to issues of public policy. That should be made explicit rather than allowing a political agenda to masquerade as a defense against bigoted speech.

There a strong argument to be made that the truly big issue in America’s public life nowadays has to do not with speech per se – but its absence. The reason why such value was place on freedom of speech in the United States Constitution is its vital contribution to a healthy democratic polity. It is essential for the voicing of public opinion, for collective political action, for petitioning government, for ensuring full and open debate of important policy questions, and – above all – for holding accountable our government officials (elected and appointed).

To restrict speech is to dam the flow of discourse, which is the sine qua non of a working democratic polity.

Historically, the anxiety arises over attempts by government to impose those restrictions – by law, by regulation, or by coercion.

But is that, today, the major failing in our public communications?

Yes, there are legitimate concerns about the pernicious spread of the “secret/classified” state and its companion: the persecution of so-called “leakers.” Still, by any reasonable standard, we Americans remain free to say, print and communicate pretty much anything we feel like doing.

Moreover, the means for disseminating those thoughts, ideas, emotions and exhortations have grown exponentially. Yet, our public discourse is more impoverished than it ever was in the past. That is the tragic irony of our times.

There is much breast-beating at the moment about the grievances of those many Americans who have risen up to cast the great protest vote of the 2016 election. How they were overlooked, how the experience of the “real America” was neglected by our elites. That self-indictment is correct. What it misses, though, are the deeper sources of this phenomenon.

After all, this is not India where walking over and around the deformed and destitute is an historically ingrained habit. We have had all the numbers we need about shifts in income distribution and declining living standards. Everyone in contact with an American university has been fully aware what the country’s near abandonment of financial support for higher education has meant for both students’ access to and the experience of their education.

It didn’t take any special prescience to discern that globalization of the national economy had at its heart the purpose of exploiting cheap labor abroad at the expense of more expensive labor at home while devising ingenious financial mechanisms to avoid taxation. And our leaders responsible for the policies, and non-policies, that have facilitated these processes knew full well what the concrete implications would be.

The silence of America’s political class is explicable in some readily understandable terms: the corrupting effect of money in politics; the corrupting effect of money in the media; the consequential muting of a healthy partisanship on socio-economic matters; the apoliticization of a society addicted to narcissistic entertainments and cheap thrills peddled to them by an assortment of unscrupulous pushers; and skillfully fostered fears like the GWOT that have drained away attention and passion.

All of this now looks self-evident. The missing factor in the equation is the irresponsible behavior of the many in all of the domains mentioned above who have known what was happening, were aware of the resulting damage being done, and may have had some qualms – but who nevertheless kept silent. They went with the flow for the sake of career, for the sake of personal status, for the sake of self-gratification.

Taking the course of least resistance seemed to carry no costs, no downside. Indeed, it didn’t and for the most part still doesn’t. Donald Trump can be seen as just another side-show carnival act.

Among those culpable of such behavior, the abrogation of the obligation as well as the right to free speech, an indictment should single out those who are paid to think and to communicate: The think tank denizens, the media journalists and commentators, the pundits of all sorts, and the academics.

Given the large number of such persons, given the years dedicated to their education and training, given the privileges they enjoy, given the unprecedented opportunities to communicate at their disposal – we might reasonably expect a rich and varied and energetic public discourse. Instead, we have a stale uniformity of thinking, a dedicated superficiality, an intellectual laziness, and an instinctive caution about doing anything that rocks any boats.

Yes, you might protest, what about LGBTQ rights, what about abortion, what about the Eighteenth Century slave trade controversy, what about immigration? Of course, there is a lot of sturm und drang freighted with emotion. They animate the nativist rebellion; they generate much passion. They are not unimportant.

Frankly, though, none of them – even in combination – are going to alter the structure and texture of American life in any fundamental way. One telling piece of evidence is the indifference to the outcome of those debates on the part of the powers that be in our multiple Establishments: financial, corporate, military, Intelligence, entertainment. They couldn’t care less whether transgenders  (still undefined) get designated bathrooms at Ivy League universities. They’re more interested in controlling what’s going on in business schools, engineering colleges, law schools, economic departments, and alumni offices.

Equally telling is the long list of cardinal issues where the dead hand of uniformity rests undisturbed. Many are in the international realm:

–Who calls into question the designation of Russia as the number 1 security threat to the United States and our military moves in its vicinity?

–Who queries when U.S. generals acquired the right to verbally declare war on foreign powers as has been done repeatedly by former NATO Commander General Philip Breedlove and his successor General Curtis Scaparrotti?

–Who points out that we have been aiding and abetting al-Qaeda in Syria for years – and asks ‘why?’

–How have we placed ourselves in the absurd position of the CIA facilitating the transfer of anti-aircraft ‘man-pads,’ and TOWs to al-Qaeda/al-Nusra while the U.S. Army is training and advising their Kurdish enemies in Northwestern Syria?

–Who asks why we have allowed the Islamic State to carry on a lucrative oil commerce to finance their operations without taking military action against it?

–Who examines in detail why we give Saudi Arabia and Turkey a free pass to succor both terrorist organizations?

–Who asks why have we participated tangibly in the destruction of Yemen while our enemies there – al-Qaeda and ISIL – exploit what we are doing to gain strength?

–Who demands that President Obama explain how he could declare the Afghan war over in a White House ceremony in December 2014 and now commit us to an open-ended fight on the ground?

–Who bothers to correct the record on our leaving Iraq in December 2011 to explain that we were told to leave by the duly constituted government of Mr. al-Maliki and had no choice?

–Who indicts the President for personally approving the CIA’s hacking into the computers of the Senate Intelligence Committee?

–Who has undertaken an investigation of the plotting that went into the secret drafting of the Trans Pacific Partnership treaty whose terms contravene principles of the Constitution?

–Who condemns the American orchestration of the coup in Ukraine?

–Who asks as to the American role in the Brazilian coup now revealed in published documents?

–Who strives to uncover why the Obama administration has committed us to spend $1 trillion on a massive upgrade of our nuclear arsenal when there is no stated or evident enemy and the logical implication is that “modernization” will produce a greater readiness to use the “bomb”?

This is for starters. The list of neglected domestic matters would be even longer. Engaging these issues ultimately is what free speech is all about.

We like to say that “the pen is mightier than the sword.” Not so, though, if all we do is take selfies of ourselves brandishing it or use it as Suzuki pupils use a violin bow.

25 comments for “When Free Speech Signifies Nothing”