For half a century, Republicans – such as Richard Nixon, Ronald Reagan and George H.W. Bush – used the race card to win over Southern whites, but Donald Trump took the tactic to a new level, says ex-CIA analyst Paul R. Pillar.

Donald Trump is waging the most explicitly racist major U.S. presidential campaign since the third-party candidacy of segregationist George C. Wallace in 1968. The exploitation of bias based on ethnicity or religion has taken more subtle forms in other election campaigns over the past half century, with Southern strategies, dog whistles, and advertising techniques that have shied away from blatant appeals to prejudice.

By contrast, Trump, in going after his main targets of Muslims and Mexicans, has repeatedly made accusations and calls for discriminatory treatment that are direct and explicit. The racism has been a major and intrinsic part of the fear-mongering that is central to Trump’s campaign. 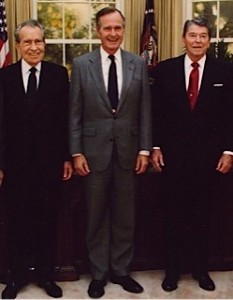 The racism has important implications domestically, of course, regarding threats to the inclusiveness, tolerance, and fairness of American society. But it also has implications that extend beyond U.S. borders while still affecting U.S. interests. Obviously the implications would be all the greater if Trump were to win the presidency.

Some effects, however, occur merely because the presumptive presidential nominee of one of the two major parties is saying such things. Everyone can see that saying such things has, despite the predictions of many pundits, helped to win the Republican nomination. Everyone can hear that Trump is not backing off from his favorite themes, despite the advice of political strategists that he needs to do so to “pivot” effectively to the general election campaign. And given how often Trump already has defied experts and strategists and kept on winning, one should be wary about dismissing what he is doing.

Probably the most important declaration of what is going on here is the statement by Speaker of the House Paul Ryan that Trump’s attack on a federal judge on grounds of the judge’s Mexican heritage is “the textbook definition of a racist comment” — while Ryan continues to support Trump for the presidency. When the senior elected leader in the U.S. Congress and in Trump’s party combines that accurate observation about the racist nature of Trump’s comments with backing for Trump’s candidacy, this says that even explicit racism should not be considered inconsistent with respectability in America.

The reverberations overseas take several forms, one of which is in leading ever more people among the populations that are targets of Trump’s hostility to conclude that they are the targets of broader American hostility as well. There already had been a major problem, well before Trump came along, with much of the public in majority Muslim countries perceiving the United States to be anti-Muslim. That perception has been stimulated by assorted U.S. policies that unsurprisingly have been seen as hostile or threatening. The Trump campaign makes that pre-existing problem even worse.

Beliefs and attitudes among the public in foreign countries establish boundaries for elites and policy-makers in those same countries. A perception of American hostility makes it politically risky for foreign governments to cooperate with the United States and to support U.S. policies. And there are many different ways even governments that nominally are friends or allies of the United States can be uncooperative.

All of this is true even of moderates and reasonable people among foreign publics and elites. With extremists, the effects are even more clear-cut. Put simply, Trump’s message of hostility toward people of a particular religion or ethnicity plays right into the hands of violent extremists claiming to protect the interests of those people against a predatory United States. The anti-Muslim part of the message is a huge (as Trump might say) favor to ISIS, Al Qaeda, and other practitioners of anti-U.S. “Islamic terrorism” (as Trump wants all of us to say).

Another effect is damage to U.S. credibility whenever the United States attempts to exert influence in favor of civil and political rights abroad. An image of the United States practicing at home what it preaches abroad, and of being a shining city on the hill with regard to tolerance and fairness, is an important underpinning of any such influence. Trump’s message makes the city look much less shiny.

Yet another effect concerns how Trump’s campaign can be seen as part of a larger recent pattern in the West of riding prejudice to political power. The pattern has especially been evident in the electoral success of xenophobic right-wing parties in Europe.

Future European elections will depend primarily on economic and social issues in each individual European country, but transnational influences are a factor as well. The sense of momentum that the Trump phenomenon, explicit racism and all, has exhibited will tend to impart confidence, credibility, and momentum to similar prejudice-riding movements in Europe.

The phenomenon might have some effect on the vote later this month in the United Kingdom on whether to remain in the European Union. Anti-Muslim, anti-immigrant sentiment very similar to what Trump expresses has become a significant factor in the campaign leading up to that referendum.

Pro-Brexit forces point to possible E.U. membership for Turkey and argue that continued British membership in the E.U. will mean being inundated by hordes of Turkish Muslims. It certainly cannot help those campaigning in favor of Britain staying in the E.U. to have one of the major presidential candidates in the United States — Britain’s most important partner and ally — sounding more like Nigel Farage than like David Cameron.

How the U.S. election in November comes out will, of course, have much to do with each of these effects over the long term. It will be important not only whether Trump loses but by how much. Probably only a decisive defeat would undo most of the overseas damage that this racism-infused campaign already is causing.