A common argument made by some of those opposed to the United States reducing its greenhouse gas emissions — even by opponents who do not try to deny the fact of human-induced global warming — is that U.S. action would be useless as long as other major emitting countries continue their polluting ways.

This argument received a sharp blow when the Obama administration reached an agreement with the biggest emitter — China — about reducing emissions from coal-fired power plants, which have been the largest single component of China’s poisoning of the atmosphere. 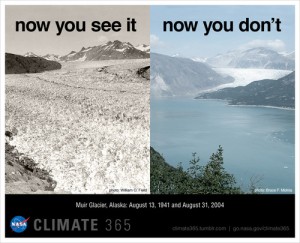 This week, meeting on the fringes of the nuclear security summit in Washington, Presidents Obama and Xi Jinping reaffirmed their seriousness on the issue by pledging to sign the Paris agreement on climate change on the first day this multilateral accord opens for signature. President Xi said, “As the two biggest economies, China and the U.S. have a responsibility to work together.”

This statement comes in the same week as release of yet another scientific study underscoring the gravity of the global warming problem. An analysis published in Nature shows how if current rates of emission continue, collapse of the Antarctic ice sheet may be even more rapid than according to previous estimates that were based on a less thorough study of the physical collision of ice and water at the edges of the shelf.

More rapid melting of this ice means a correspondingly rapid rise in sea level. To put this result in personally and politically meaningful terms, it means it is within the lifetime of children as well as grandchildren of politicians in office today that substantial parts of coastal U.S. cities — and not just those parts of Miami Beach that already get flooded regularly and where streets have had to be raised — will be under water.

The immediate impediment as far as coal-fired power plants are concerned was erected in February when the conservative majority on the Supreme Court, in a burst of judicial activism in a 5-4 decision, took the unprecedented step of halting implementation of a federal regulation (in this case from the Environmental Protection Agency) before it was even reviewed by a federal appeals court.

Clear action by Congress would obviate this kind of judicial interference, but such action seems unlikely as long as Congress is controlled by a majority whose resistance to saving the planet goes beyond arguments about whether other countries would do their share. That resistance involves an attitude toward scientific knowledge on the subject that lies somewhere between medieval alchemy and the Scopes monkey trial.

And the resistance is rooted in narrow pecuniary interests. Presidential candidate Ted Cruz’s apparent fealty to ignorance on this subject, for example, probably is more a matter of fealty to the coal-mining industry.

Many of the same politicians who oppose the Obama administration’s efforts to arrest climate change also regularly bewail Mr. Obama’s supposed abandonment of “leadership” in the world. If the resistance to U.S. action on emissions persists, then China will be the state that, head and shoulders above the United States, will be exercising global leadership on the issue. And this will not be a matter of China just making sacrifices.

To the contrary, as an expert on Chinese climate policy at the World Resources Institute points out, “The understanding is that China is doing this for its own sake. It’s good for their environment; it’s good for their economy.” China has made a major commitment in its latest economic plan to expand greatly its use of renewable energy sources in place of fossil fuels.

So China will be moving ahead with the next generation of energy technology to power its economy. Meanwhile, if political resistance here doesn’t abate, the United States will be stuck with digging out of the ground and burning the residue of primeval muck — with an atmospheric result that continues to make the planet less habitable.

To candidates who like to talk so much about U.S. leadership, we should ask, what sort of leadership is this?

4 comments for “Will China Take Lead on Global Warming?”