As the U.S. and Iranian negotiators move toward completion of a historic deal in Vienna, the lifting of sanctions against Iran – which is the most difficult outstanding issue in the talks – is on its way to being resolved, Western and Iranian sources close to the nuclear negotiations told the Middle East Eye.

With talks being extended until July 10 and Iranian sources suggesting that a deal could be penned as early as the evening of July 9, it appears that the United States and Iran have agreed on most of the provisions in the agreement governing the lifting of unilateral and UN Security Council sanctions. 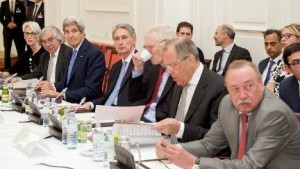 Secretary of State John Kerry and other negotiators from the P5+1 at a meeting in Austria, on July 6, 2015, regarding the Iran nuclear talks. (State Department photo)

The one sanctions issue that has remained as a stumbling block in the past few days involves the text of the UN Security Council resolution that both sides have agreed will replace a series of resolutions passed between 2006 and 2010.

Until now, the P5+1 (the five permanent members of the UN Security Council plus Germany) have insisted that the text of the new resolution include a continuation of the conventional arms embargo that was imposed by a 2007 Security Council resolution. But Iran has been objecting strenuously.

An Iranian official, who could not be identified under the rules of his briefing to the press on Monday, revealed the Iranian negotiation position on the issue. The arms embargo should not be part of the comprehensive plan, the official said. There is no evidence that the arms embargo had any relation to the nuclear issue.

However, the Iranian position appears to have been strengthened by deep divisions over the issue among the six powers. The P5+1 minus Germany – which is not a permanent member of the Security Council – met on Monday night to review their negotiating position on the arms embargo, according to a senior European diplomat who asked not to be identified, because of the extreme sensitivity of the discussions.

At the talks, the Russians and Chinese were firmly opposed to its inclusion, and France was wavering, the European diplomat added. The absence of a consensus for the position taken by the six powers up to now suggests that the last major issue relating to sanctions removal will now be resolved.

Another potential stumbling block to an agreement was eliminated during the early days of the Vienna round of talks. That diplomatic leap forward was suggested by the surprise announcement by International Atomic Energy Agency director-general Yukiya Amano on Saturday that the experts, with Iranian cooperation, will be able to complete his report on the ËœPossible Military Dimensions” (PMD) issue by December.

The P5+1 has taken the position in past negotiating rounds that UN Security Council sanctions would be lifted only after Iran cooperated fully with the IAEA on resolving the PMD issue. Western diplomats had even suggested to news media that the P5+1 would delay the resolution of the PMD issue in order to maintain leverage on Iran for years to come.

The Iranians, meanwhile, objected to any attempt by the six powers to stretch out the process of resolving the PMD issue, calling it an endless game that would allow the United States and its allies to hold on to some sanctions.

Despite their objections, the Lausanne framework included the PMD issue as one of the conditions that Iran was required to meet in order to lift the UN sanctions and it remained unclear how Iran would avoid a crisis in the implementation over that issue.

But the Obama administration was determined to eliminate the chances of such a crisis. Less than two weeks before they started, Secretary of State John Kerry signaled in a press briefing that the PMD issue would not be allowed to interfere with an agreement. Then in the first days of the Vienna talks, Amano had a meeting with Kerry and two meetings with Iranian Foreign Minister Mohammad Javad Zarif. That was followed by a quick Amano trip to Tehran to meet with President Hassan Rouhani and Secretary of the Supreme National Security Council Ali Shamkhani.

The result of the meetings with Amano, according to two Iranian officials who insisted on anonymity to discuss these sensitive negotiations, was an agreement between Amano and Iran that his final report would reflect two narratives on the issue of whether Iran had sought nuclear weapons.

One of the Iranian officials told Middle East Eye that Amano had assured the Iranians that the Iranian case against the intelligence that the IAEA has touted in the past would be reflected in his report along with his anticipated repetition of the line taken by the IAEA in past reports.

The sequence of events clearly indicates that Kerry made it clear to Amano that the United States wants him to issue a report that will contribute to the implementation of the agreement rather than becoming a stumbling block to it.

An even more important diplomatic success on the problem is a detailed plan on the timing of sanction removal that was hammered out by technical experts last week and is to be submitted to political directors of the P5+1 and Iran for approval. A second Iranian official who also insisted that he not be identified outlined the plan to Middle East Eye last week.

According to the official, the plan, which had not yet been approved by political directors of the six powers negotiating with Iran, reconciles U.S. and Iranian positions on the issue that had seemed earlier this year to be so sharply contradictory as to rule out any diplomatic compromise.

U.S. officials had said repeatedly that sanctions on Iran could only be lifted after the IAEA had verified Iran’s implementation of its nuclear commitments and then would be lifted only in a phased manner. Iran’s Supreme Leader Ali Khamenei, however, had demanded that the sanctions were to be lifted immediately on the agreement going into effect.

The solution to that apparently intractable problem was first presented by the U.S. delegation to the Iranians, according to an Iranian official involved in the negotiations who spoke on condition that he not be identified. It was based on two crucial ideas in which each side agreed to reinterpret central elements in the plan.

The United States accepted for the first time that, realistically, lifting the sanctions would be far more complex and time consuming than simply signing a legal document. It acknowledged that lifting sanctions would require a whole series of actions that would make the commitment by the P5+1 to end sanctions truly effective.

Those mutual concessions are the basis for what would be called the “operationalisation phase”of the agreement. In that phase, the actions of the two sides to carry out their obligations would be “simultaneous and parallel.” That crucial phrase would allow Iran to selling sell the deal within Iran as consistent with Khamenei’s demand that the lifting of sanctions would take place on the first day of implementation.

Iran’s commitments to reduce its nuclear program were already agreed in detail in the Lausanne framework agreement reached on April 2. What the final agreement will do is spell out in a technical annex exactly what the United States and the European allies – who imposed sanctions on Iran in 2012 – will do to make the lifting of those sanctions truly effective and how the timing of implementation will be synchronized.

The first step in the process detailed in the annex – to be taken immediately at the beginning – is what the Iranians view as the “guarantee” that the United States and its European allies will carry out the sanctions removal. The “guarantee” would take the form of a pledge to take specific legal steps necessary to suspend U.S. sanctions and terminate the EU sanctions upon IAEA verification of the Iranian implementation measures, according to the Iranian official.

Equally important to assure Iran that the sanctions will actually be lifted effectively is a series of steps the Western allies would be required to take in the months that followed the initial commitment to educate the global business and financial community about the implications of the agreement to end sanctions.

“They need to do preparatory work to change the culture of sanctions,” the Iranian official explained. That will entail informing major financial institutions and business associations that they will no longer be subject to the extraterritorial sanctions against companies that do business with Iranian banks once the operationalization phase is completed.

Gareth Porter is an independent investigative journalist and winner of the 2012 Gellhorn Prize for journalism. He is the author of the newly published Manufactured Crisis: The Untold Story of the Iran Nuclear Scare. [This story originally appeared at Middle East Eye.]

10 comments for “Inching Toward an Iran-Nuke Deal”