At the Paris procession honoring the victims of the Charlie Hebdo massacre, world leaders locked arms in defense of free speech although many of the participants including the French have been busy cracking down on freedom of expression, notes Michael Winship.

There’s no question how remarkable it was seeing all those world leaders marching at the front of the line during last Sunday’s massive rally in Paris, a sight so reminiscent of the gathering of international statesmen that in November 1963 solemnly walked behind the caisson carrying the body of President John F. Kennedy. Among them back then: French President Charles de Gaulle and Emperor Haile Selassie of Ethiopia.

In turn, that event was inspired, in part at least, by the 1910 funeral procession for Britain’s King Edward VII, when world royalty, including nine monarchs, many of them related by blood or marriage, rode in a horseback and carriage procession through the streets of London. 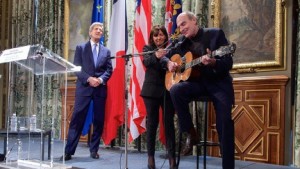 Singer James Taylor performs “You’ve Got a Friend” onstage in Paris on Jan. 16, 2015, during a tribute to the victims of the Charlie Hebdo massacre. On the left is Secretary of State John Kerry. (U.S. State Department photo)

It was, historian Barbara Tuchman wrote in her classic The Guns of August, “the greatest assemblage of royalty and rank ever gathered in one place, and, of its kind, the last.” Both Austria’s Archduke Franz Ferdinand and Germany’s Kaiser Wilhelm were at the funeral. In 1914, Ferdinand’s assassination and an internecine web of alliances would ensnare Wilhelm and others of the crowned heads in the First World War. It would end with the dissolution of empires and many of the kings deposed, by treaty or revolution or both.

So as royalty rode in 1910, symbols of imperial hubris, in 2015, world leaders walked, decrying the violent suppression of speech and religious freedom, although many of them have been guilty of the same crimes in their own nations. In the words of media watchdog Reporters without Borders, “It would be unacceptable if representatives of countries that silence journalists were to take advantage of the current outpouring of emotion to improve their international image and then continue their repressive policies when they return home.”

“On what grounds are representatives of regimes that are predators of press freedom coming to Paris to pay tribute to Charlie Hebdo, a publication that has always defended the most radical concept of freedom of expression?

“Reporters without Borders is appalled by the presence of leaders from countries where journalists and bloggers are systematically persecuted such as Egypt (which is ranked 159th out of 180 countries in RWB’s press freedom index), Russia (148th), Turkey (154th) and United Arab Emirates (118th).”

The Guardian came up with a handy, interactive group photo: it points out faces in the crowd and tells you what that leader’s nation has been up to and where it stands on the Reporters without Borders press freedom ranking.

The website Mashable.com has its own fine accounting of just some of the more notorious offenses. And Greg Myre, the international editor of NPR.org, notes the work of “Blogger Daniel Wickham [who] compiled a list of more than 20 countries and leaders who have denounced the Paris attack, with helpful comparisons to what has been taking place in the countries they lead.”

Of course France, despite the biting, satiric insouciance of Charlie Hebdo, is far from without sin Glenn Greenwald at The Intercept writes about the arrest of controversial French comedian DieudonnÃ©, one of dozens served in the last few days for allegedly defending terrorism.

According to George Washington University law professor Jonathan Turley, “The greatest threat to liberty in France has come not from the terrorists who committed such horrific acts this past week but from the French themselves, who have been leading the Western world in a crackdown on free speech. Speech has been conditioned on being used ‘responsibly’ in France, suggesting that it is more of a privilege than a right for those who hold controversial views.”

Here at home, James Risen, Edward Snowden, Chelsea Manning and others have become powerful symbols of the dangers of speaking up and out, but then, none of our notables above the rank of ambassador were in the line of Sunday’s march. Secretary of State John Kerry arrived in Paris on Friday to make amends, and he brought along James Taylor to sing “You’ve Got a Friend.” Honest.

3 comments for “Hypocrisy on Parade in Paris”