Since bursting onto the U.S. foreign policy stage in the 1980s, the neocons have been masters of “perception management,” devising emotional (and often false) messaging to justify aggressive war, as Maidhc Ã“ Cathail sees in recent Holocaust-themed propaganda against Syria’s government.

“The irony is that the Nazi holocaust has now become the main ideological weapon for launching wars of aggression,” Norman Finkelstein tells Yoav Shamir in “Defamation,” the Israeli filmmaker’s award-winning 2009 documentary on how perceptions of anti-Semitism affect Israeli and U.S. politics. “Every time you want to launch a war of aggression, drag in the Nazi holocaust.”

If you’re looking for evidence in support of Finkelstein’s thesis today, you need look no further than the U.S. Holocaust Memorial Museum’s exhibit of images of emaciated and mangled bodies from contemporary Syria. 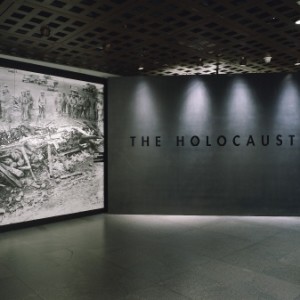 The small exhibit, entitled “Genocide: The Threat Continues,” features a dozen images said to be from an archive of 55,000 pictures allegedly smuggled out of the country by “Caesar,” a mysterious source who claims to have defected from his job as a Syrian military photographer after having been ordered to take photos of more than 10,000 corpses.

Emphasizing the threat of an impending genocide, the reportedly conscience-stricken defector warns that a similar fate awaits the 150,000 people he says remain incarcerated by President Bashar Assad’s government.

“They’re powerful images, and viewers are immediately reminded of the Holocaust,” Cameron Hudson, the director of the museum’s Center for the Prevention of Genocide, was cited as saying in an Oct. 15 Associated Press report. Hudson, whose intriguing career in genocide prevention includes a stint as intelligence analyst in the CIA’s Africa Directorate, added, “They show a side of the Syrian regime that hasn’t really been really seen. You might have heard about it, read about it, but when you’re confronted with these images, they’re impossible to ignore.”

The museum’s promotion of these impossible-to-ignore, Holocaust-recalling images dates from a few months earlier, however. In his July visit to Washington that included a series of meetings with U.S. government and congressional officials, Caesar’s first stop was at the Holocaust Museum.

On July 28, Michael Chertoff, a member of the museum’s governing board of trustees, presented the purported defector to a small group of reporters and researchers. According to the Washington Post’s Greg Miller, this event was the first time that Caesar had appeared publicly to answer questions about the photos deemed by some human rights organizations as evidence of war crimes committed by Assad.

Chertoff, a co-author of the USA PATRIOT Act, hasn’t hesitated to invoke the Nazis either in support of the neoconservative-conceived “global war on terror.” In an April 22, 2007 Washington Post op-ed entitled “Make No Mistake: This Is War,” the then-secretary of the Department of Homeland Security wrote, “Al-Qaeda and its ilk have a world vision that is comparable to that of historical totalitarian ideologues but adapted to the 21st-century global network.”

Commenting on the former DHS secretary’s close ties to Israel, Jonathan Cook notes in his book Israel and the Clash of Civilizations that Chertoff’s mother was an air hostess for El Al in the 1950s. “There are reports that she was involved in Operation Magic Carpet, which brought Jews to Israel from Yemen,” writes the Nazareth-based British journalist. “It therefore seems possible that Livia Eisen was an Israeli national, and one with possible links to the Mossad.”

Among the other members of the Holocaust Memorial Council noted for their staunch support of Israel and American interventionism are the pardoned Iran-Contra neocon intriguer Elliott Abrams and Nobel Peace Prize laureate and Holocaust survivor Elie Wiesel.

Writing in Foreign Policy’s The Cable on April 23, 2012, Josh Rogin drew attention to Wiesel’s pointed introduction of President Barack Obama at a ceremony in the Holocaust Museum. Comparing the Syrian president and then Iranian President Mahmoud Ahmadinejad to the perpetrators of the Nazi holocaust, Wiesel implicitly criticized Obama’s supposedly obtuse inaction, “So in this place we may ask: Have we learned anything from it? If so, how is it that Assad is still in power?”

As Rogin, a regular media conduit for anti-Assad interventionism, pointedly observed, the speech was reminiscent of another one Wiesel gave at the opening of the museum in 1993, when he urged then President Bill Clinton to take military action in Bosnia: “Similarly, that speech came at a time when the Clinton administration was resisting getting entangled in a foreign civil war but was under growing pressure to intervene.”

In a revealing interview published on Aug. 11, 2013, by the Turkish newspaper Today’s Zaman, Caesar’s interpreter, who presided over a question-and-answer session at the museum, echoed Wiesel’s criticism of President Obama’s resistance to doing the bidding of the neocons and “liberal interventionists” seeking greater American intervention in Syria.

Asked by the GÃ¼len movement-aligned daily if America had forgotten the Syrian war, Mouaz Moustafa replied, “It is the President who is against action in Syria not the whole of the U.S. government. President Barack Obama has been very insular and cautious about Syria. The President does not seem to understand how important Syria is to U.S. national security [….] The President does not feel the need to explain to the American people or the world that the risks with any of the bad options that we have are far outweighed by the risks of inaction.”

It is hardly a coincidence that Moustafa’s rhetoric bears a striking resemblance to that of Israel’s friends like Wiesel. Although one of best known media-promoted faces of the Syrian opposition in Washington has understandably sought to obscure his ties to Tel Aviv, the executive director of the Syrian Emergency Task Force has undeniable links to one of its American lobby’s leading think tanks.

After it emerged that Moustafa’s nonprofit had coordinated Sen. John McCain’s May 2013 trip to meet with the so-called “moderate” Syrian rebels, an examination of the SETF executive director’s background revealed that he was one of the Washington Institute for Near East Policy’s “experts”; a contributor to WINEP’s Fikra Forum, “an online community that aims to generate ideas to support Arab democrats in their struggle with authoritarians and extremists”; and had addressed the AIPAC-created think tank’s annual Soref symposium entitled “Inside Syria: The Battle Against Assad’s Regime.”

Even more damningly, it was discovered that one of SETF’s web addresses was “syriantaskforce.torahacademybr.org.” The “torahacademybr.org” url belongs to the Torah Academy of Boca Raton, Florida whose key values notably include promoting “a love for and commitment to Eretz Yisroel.”

When confronted with these embarrassing revelations, Moustafa responded via Twitter, “call me terrorist/Qaeda/nazi as others have but not Zionist Im [sic] denied ever entering palestine but it lives in me.” Dismissing the intriguing connection to a pro-Israel yeshiva in Florida, he claimed that the “url registration was due to dumb error by web designer.”

The Israel lobby-backed Moustafa also interpreted for Caesar, who was wearing dark glasses and a blue rain jacket with the hood pulled over his head, when he testified before a closed-door session of the House Committee on Foreign Affairs this July. At least some of its members would no doubt have recognized the interpreter, however.

As Foreign Policy’s The Cable reported on June 6, 2013, two leaders of the House Foreign Affairs Committee, Reps. Ed Royce, R-California, and Eliot Engel, D-New York, dispatched aides to Turkey to meet leading members of the Syrian Free Army between May 27 and June 3. As The Cable had learned, the meeting had been coordinated by Moustafa’s Syrian Emergency Task Force.

(This September, staff from the Syrian Emergency Task Force and the House Foreign Affairs Committee reportedly facilitated a meeting in Turkey that led to more than 20 Syrian rebel commanders signing “a historic agreement” to unite in the quixotic fight against both ISIS and Assad.)

Interestingly, the FP article noted that “[t]he two lawmakers don’t exactly see eye-to-eye on the question of whether the United States should intervene more aggressively in the protracted civil war,” with Engel having “carved out one of the most hawkish positions in Congress on Syria, being the first to introduce legislation authorizing lethal assistance for the rebels.”

Moreover, as Rep. Engel pointed out in his opening remarks at the Syria briefing, he has “been personally focused on Syria for a long time.” In 2003, he passed the Syria Accountability Act, which imposed sanctions on the government of Hafez Assad.

In a reference to his introduction of the Free Syria Act in March 2013, which authorized the President to provide lethal assistance to those Engel described as “carefully vetted members of the moderate Syrian opposition,” the reflexively pro-Israel Democratic congressman from New York said, “If we had taken that approach a year and a half ago, we may have been able to stem the growth of ISIS and weaken the regime of Bashar Assad. But we didn’t, unfortunately, so we’ll never really know what would have happened if we had acted then.”

While Caesar and his American-based Palestinian-Syrian interpreter clearly have the enthusiastic support of Israel’s friends in Washington, the photos presented as evidence of an alleged Syrian “holocaust” by Assad’s forces received their initial boost from one of Tel Aviv’s closest, albeit covert, Arab allies in their mutual war against the Syrian government.

As part of a review of the photos commissioned by the government of Qatar, David Crane, a former war-crimes prosecutor for Sierra Leone, reportedly spent hours interviewing Caesar. An Oct. 13 Yahoo News report by Michael Isikoff quotes Crane as saying that they document “an industrial killing machine not seen since the Holocaust.”

Like the director of the Holocaust Museum’s Center for the Prevention of Genocide, Crane has worked for the U.S. government, including in the field of military intelligence. His former posts include Director of the Office of Intelligence Review, assistant general counsel of the Defense Intelligence Agency and the Waldemar A. Solf Professor of International Law at the United States Army Judge Advocate Generals School.

Having ostensibly left the intelligence world behind him, Crane founded and directs the Syrian Accountability Project (SAP) at Syracuse University’s College of Law, which describes itself as “a cooperative effort between activists, non-governmental organizations, students, and other interested parties to document war crimes and crimes against humanity in the context of the Syrian Crisis.” According to its website, SAP has “worked closely with the Syrian National Coalition” which is listed as one of its clients.

Founded in Doha, Qatar in November 2012, the Syrian National Coalition represents the Free Syrian Army, which has reportedly collaborated with the al-Qaeda-linked Jabhat al-Nusra and the Islamist Ahrar al-Sham in massacres of Syrian civilians such as the one that occurred this March in the village of Kassab, an ancestral home of Syria’s minority ethnic Armenians, on the Turkish border.

Professor Crane is also vice-president of I Am Syria, whose mission statement describes it as “a non-profit media based campaign that seeks to educate the world of the Syrian Conflict.” I Am Syria’s president, Ammar Abdulhamid, has been a fellow at two of the most prominent Washington-based pro-Israel think tanks, the Saban Center for Middle East Policy and the neocon Foundation for the Defense of Democracies; while one of its education directors, Andrew Beitar, is a regional education coordinator for the Holocaust Museum.

As the case of the mysterious Caesar and his trove of photos clearly shows, those who want to launch a war of aggression on Syria as they have succeeded in doing in Iraq and Libya have at every opportunity sought, as Finkelstein put it, to drag in the Nazi holocaust.

As more and more people become wise to this ruse, they should keep in mind the two words espoused by the U.S. Holocaust Memorial Museum: “Never Again.”

← The Battle for Palestine — Part Three
Treating Putin Like a Lunatic →

8 comments for “Using the Holocaust to Justify War”