The Beatles — introduced to Americans a half century ago — became a marker for Baby Boomers as they emerged from the shock of JFK’s death, faced the Vietnam War, grieved over the murder of prophets, including John Lennon, and confronted life’s endless complexities, as Michael Winship reflects.

Just to briefly buzz in on this weekend’s whir of nostalgia around the 50th anniversary of the Beatles’ first appearance on The Ed Sullivan Show. As many have noted, it was less than three months after the Kennedy assassination, bringing across the Atlantic a whiff of much needed fresh air, a reacquaintance with joy we all had been craving since November 22, 1963.

I had first seen them a month or so earlier in a film report on The Jack Paar Show on NBC. In the weeks after that broadcast, I came down with pneumonia, and at the age of 12 was quarantined in my bedroom with only my contagion, books, undone homework and one of those first miniature Sony TVs, a “tummy tube” that was the size of a football. 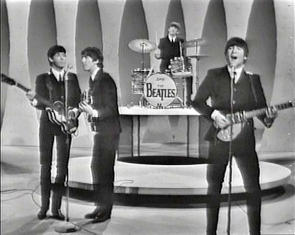 The Beatles on the “Ed Sullivan Show.”

That was the tiny set on which I watched the Sullivan show and the Beatles, as caught up in the frenzy as so many other American kids. A few days later, my mother abandoned her Kennedy scrapbooks to make a busy project for us both. One of the young women at the hair salon she frequented was Beatle-besotted, so my ever-creative Mom made her a sign: green poster board on which she glued photos of the band I cut from magazines and some black lettering (“Yeah, Yeah, Yeah,” etc.).

She stapled tiny bags of jelly beans to it, the press said obsessed teenage girls hurled them at the Fab Four because they were Paul McCartney’s favorite (or was it George Harrison?), then secretly delivered it after hours to the beauty parlor door. History does not record the woman’s reaction but the two of us decided it had to have been monumental.

My love of the Beatles grew as their music did: more layered, complex and thoughtful. Sergeant Pepper’s Lonely Hearts Club Band was a treasured 16th birthday gift, The White Album a present to myself, Abbey Road a musical highlight of freshman year in college (that, and hearing The Who perform a work-in-progress version of “Tommy” during Homecoming weekend).

Some four years after their first Sullivan appearance, I had gone to England for the first time as part of a drama and literature study program. When we got to London, I spent hours roaming the streets by myself, taking everything in. I visited Carnaby Street, which had been the symbolic center of all things British and hip, but by the time I got there, the bloom was off the English rose and the street was more tattered, fading carnival than fashion hub.

The Beatles were nearing their last couple of years as a group and their own boutique, Apple, had recently shut its doors. One night while I was there, Paul McCartney and his girlfriend arrived and painted “Hey Jude/Revolution” on the abandoned store’s front window, promotion for the upcoming record single almost no one yet knew about.

In the Sixties, the Beatles’ lives and careers paralleled what was happening to baby boomers like me across the country: the flirtations with nonconformity and various levels of altered consciousness, the civil and uncivil insubordination, our fitful attempts at achieving transcendental serenity.

Music journalist Mikal Gilmore said it well in Rolling Stone , back on the 25th anniversary of John Lennon’s murder (and when I wrote a bit of what you’re reading here now):

“The Beatles were simply the biggest thing in the world, short of nuclear fear. They represented a sea change, in music, in culture, in democracy itself. They weren’t always comfortable with having that effect. ‘People said the Beatles were the movement,’ Lennon later said, ‘but we were only part of the movement. We were influenced as much as we influenced.’ True, but the Beatles were a key part of that movement. They represented youthful hope, and they represented the new social power that rock & roll might achieve, a power not only to upset but to transform. The world was changing, or at least it felt that way, and the Beatles served as emblems of that change.”