Neocons and other war hawks criticized President Obama for not launching a military assault on Syria, but his decision to apply coercive diplomacy instead fits with many other U.S. precedents and showed a much defter touch than heavy-handed tactics used by Henry Kissinger, writes ex-CIA analyst Melvin A. Goodman.

President Barack Obama’s deployment of a naval task force to the Mediterranean appears to be working as part of the coercive diplomacy aimed at removing chemical weapons from Syria. He has demonstrated caution and restraint in the crisis that are consistent with his approach to ending the U.S. presence in Iraq; reducing the U.S. presence in Afghanistan; and “leading from behind” in Libya two years ago.

His actions are very different from those of Secretary of State and National Security Advisor Henry Kissinger four decades ago. Kissinger jeopardized Soviet-American detente and antagonized our European allies in NATO by his reckless actions during the October War of 1973. 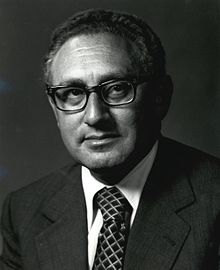 One of the riskiest actions Kissinger took was the unnecessary declaration of a high military and nuclear alert Defense Condition III that could have worsened the Arab-Israeli War and provoked a Soviet-American confrontation. In view of our reliance on Russian forbearance in the current flash-point situation in the Middle East, it is important to recognize that Moscow’s restraint also was important to diplomatic success in the end game of the October War in 1973.

The meeting took place just before midnight, and President Richard Nixon’s military aide, General Alexander Haig, refused to awaken the President. Both Kissinger and Haig believed that the President, preoccupied with impeachment, was too distraught to participate in high-stakes foreign policy decision-making. A new vice president had been named Gerald Ford but he had not been confirmed and therefore could not attend the meeting.

If neither the president nor the vice president is available, the 1947 Act stipulates that the president has to authorize in writing who will be in charge. There is no record of such a letter in 1973. Secretary of State and National Security Advisor Kissinger ran the meeting, and the participants were Secretary of Defense James Schlesinger, CIA Director William Colby, and Chairman of the Joint Chiefs Admiral Thomas Moorer.  Kissinger was the only one present who believed the Soviets were prepared to intervene in the Middle East.

In his memoirs, Kissinger contends that he needed to send a significant military signal to the Soviet Union because of a threatening note that Soviet General Secretary Leonid Brezhnev had sent to the White House as well as intelligence information that was available to the Central Intelligence Agency.

Brezhnev’s note was neither a threat nor an ultimatum. The Brezhnev note in 1973 was similar to his note to the United States during the Six-Day War of 1967. Without consulting the President, Kissinger put into play DefCon III for the first time since the Cuban missile crisis in 1962. The fact that the Strategic Air Command was put on alert was particularly ominous because of the signal this sent to the Soviets.

The intelligence, moreover, did not indicate that the Soviets were preparing to intervene in the Middle East. In fact, the Soviet airlift to Egypt had stopped early on Oct. 24. The evidence of nuclear materials on Soviet naval ships coming through the Dardanelles to the Mediterranean Sea had been available on Oct. 15, ten days before the declaration of DefCon III, and it was based on an erratic naval collection system that typically and inaccurately recorded radiation from most Soviet ships.

The Soviets did have several AN-22 transport aircraft on alert, as was typical in times of crisis, but the key indicators did not point to a possible intervention. There were no supplies on the runway and the airborne forces were not palletized. Soviet tactical aircraft had limited range, and Soviet fighters lacked aerial refueling capability.

Kissinger’s reckless use of a nuclear alert during a crisis in the Middle East was typical of his diplomatic jujitsu in other Third World imbroglios. In 1970, when the Nixon administration was faced with a real threat about the Soviet construction of a submarine repair facility in Cuba, Kissinger wanted to send a strong military signal to the Soviets.  Nixon wisely said, “I think we can resolve this with diplomacy.” Nixon was right.

The following year, during the Indian-Pakistan War of 1971, we learned from the White House tapes that Kissinger told President Nixon that the Soviets might take the opportunity to “move against” the Chinese and that if “we don’t do anything, we’ll be finished.” President Nixon wanted to know if Kissinger meant that we should “start lobbing nuclear weapons in, is that what you mean?” Kissinger made it clear that he meant just that, referring to it as the “final showdown.”

The White House tapes reveal Nixon and Kissinger at their worst. In addition to Nixon’s typical vulgarity, the President told Kissinger that the Indians needed a “mass famine.”  Kissinger sneered at people who “bleed” for the Bengalis of East Pakistan. Nevertheless, Nixon backed off from “Armageddon,” as he called it, although he did agree with Kissinger’s gratuitous decision to deploy an aircraft carrier in the Bay of Bengal, which caused a great deal of nervousness in the Pentagon.

In 1972, Kissinger resorted to the unnecessary Christmas bombing of North Vietnam although the United States had every intention of pursuing a diplomatic solution to end the war. Just as Kissinger designed Def Con III in 1973 to convince the Israelis that we were serious about dominating the diplomatic process in the Middle East, the bombing of North Vietnam was designed to convince the South Vietnamese that they could trust the Nixon administration.

In 1975, not long after the confirmation of President Gerald Ford, the Cambodian Khmer Rouge hijacked a U.S. merchant marine ship, the Mayaguez, and held its crew hostage. Kissinger convinced President Ford to conduct a rescue operation of the crew of the Mayaguez, although the crew had already been released. Forty-one Marines died in the operation, more Marines than there were crew members on the Mayaguez.

Even when Kissinger received information that the crew was about to be released, Kissinger went ahead with the Marine operation, presumably to enhance the new president’s credibility. Kissinger wanted to demonstrate that the United States would not be pushed around, notwithstanding the fall of South Vietnam, and that Washington would not hesitate to use its military power.

Kissinger’s machinations as secretary of state and as national security advisor point to the dangers of relying on the use of military signals in diplomatic confrontations. In the case of Def Con III in 1973, we were fortunate that the Soviet Politburo had no interest in deploying military power to the Middle East and had far too much interest in detente to worsen relations with the United States.

Nineteen inspectors from the Organization for the Prohibition of Chemical Weapons are already on the scene in Damascus, and the Syrian government is cooperating with the inspection. The prospect of a cease-fire is still remote, but President Obama’s hesitation in the use of military force meant that the United States could successfully avoid the use of military power in another Arab country.

Melvin A. Goodman, a senior fellow at the Center for International Policy and adjunct professor at Johns Hopkins University.  He is the author of the recently published National Insecurity: The Cost of American Militarism (City Lights Publishers) and the forthcoming The Path to Dissent: The Story of a CIA Whistleblower (City Lights Publisher). Goodman is a former CIA analyst and a professor of international relations at the National War College. [This article previously appeared at Counterpunch.]

12 comments for “Comparing Obama to Kissinger”