Americans like to think of themselves as peace-loving, but their history belies that self-image. From the genocidal wars against Native Americans through the current multi-front “war on terror,” the United States has been fighting and killing for most of its history, as Lawrence Davidson notes.

There is an American tradition of frequent war. Indeed, over the course of the country’s history the United States has been at war almost constantly. Some of these have been relatively short conflicts like interventions in various Central American venues. Some have been much larger and longer affairs, like the Civil War, World War II and Vietnam.

The point to be drawn from this is that the people of the United States are (perhaps unconsciously) acclimated to always being in one sort of armed conflict or another. Unfortunately, this history renders a recent public statementby the Pentagon’s general counsel, Jeb Johnson, into just a bit of fanciful idealism. He insisted “war must be regarded as a finite, extraordinary and unnatural state of affairs.” Certainly not for Americans. 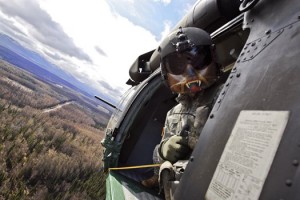 An Army sergeant peers out the door of a UH-60 Black Hawk helicopter on the way to pick up soldiers in a training operation at Joint Base Elmendorf-Richardson, Alaska, May 23, 2013. (U.S. Army photo by Percy Jones)

With their active assumption that the U.S. represents the world’s best chance for the victory of “good” against “evil,” Americans seem willing to battle on as long as they are convinced they are winning and the casualties are low. That may be why there was no popular protest when Michael Sheehan, Obama’s assistant secretary of defense for “special operations,” told a Senate hearing that the country’s “war on terror” might last “at least 10 or 20 years” longer (it has already been going on 12 years). In the mainstream media, there was not even a noticeable raising of an anchorperson’s eyebrows!

Many middle-echelon State Department analysts familiar with the Middle East know the answer has something to do with the fact that U.S. policies in the region have not significantly changed since the 9/11 attacks. Most of the personnel above the middle echelon are political appointees who keep asserting that what motivates the al-Qaida types is religious fanaticism.

Of course there are religious fanatics at work on both sides of the “war on terror,” but those in the Middle East have grievances to focus on and U.S. policies are seen as one source of those. The fact that the “war on terror” is largely a consequence of American policies cemented into place by powerful special interests calls into question President Barack Obama’s recent assertion that “this is a just war, a war waged proportionally in last resort and in self-defense.”

It also suggests that the struggle is likely to go on and on until its ruinous consequences become so obvious to the voting public that the politicians are forced to break with their special-interest supporters. This is the real criterion for change, for, under the present circumstances, there will always be “terrorists” out there who, to reword (and correct) an assertion by President George W. Bush, “hate our policies.”

And what is there not to hate about draconian sanctions, the arming of dictators, and giving opened-ended support to the most racist state in the region?

In the meantime, President Obama has been trying to create “rules of engagement” for the use of the government’s primary weapon in this endless war: those remote controlled bombs we call drones. These rules will, he says, provide “clear guidelines, oversight and accountability” and satisfy partisan congressional grumblings, if not the more pertinent questions of human rights advocates.

To this end the White House has issued guidelines concerning procedures for counterterrorism operations such as drone attacks. The guidelines tell us “there must be a legal basis for using lethal force” and decisions to use such “force against individual terrorists outside the United States and areas of active hostilities are made at the most senior levels of the U.S. Government.” The document then lays out other specific preconditions for the use of lethal force, among which are:

1. “Near certainty” that the terrorist target is present.

2. “Near certainty” that noncombatants will not be injured or killed.

3. An assessment that “capture is not feasible at the time of the operation.”

4. An assessment that the relevant governmental authorities in “the country where action is contemplated cannot or will not effectively address the threat to U.S. persons.”

5. An assessment that “no other reasonable alternatives exist” to effectively address the threat to U.S. persons.

The problem with these guidelines, beyond a number of undefined terms such as “near certainty,” “reasonable” and “feasible,” is that its criteria misrepresent reality or are utterly unreliable. For instance, under international law there is no “legal” basis for this sort of use of “lethal force.”

What the Obama administration (and the Bush regime before it) has done is take up the illegal Israeli “targeted assassination” program, which constitutes the behavior of a rogue state. Even from a domestic legal prospective, Obama’s criteria for targeted assassination will be carried out behind closed doors. There will be no due process. And there will be no accountability for “mistakes.”

Finally, nothing in the guidelines is enacted into legislation and therefore, assuming an effort to actually follow their criteria, they are specific to the Obama presidency and have no authority over his successors. As Kenneth Roth, director of Human Rights Watch, put it, “a mere promise that the U.S. will work within established guidelines . . . provides little confidence that the U.S. is complying with international law.”

Throughout the country’s history of one war following another, there has been a parallel history of cyclical deterioration and recovery of constitutional rights.

However, with the government’s wholehearted embrace of targeted assassination, as well as modern surveillance technology and the precedent of offshore prisons for “enemy combatants,” one wonders if, from now on, the recovery of rights will ever be fully equal to their loss. Maybe now it really will be all downhill for freedom in the “land of the free.”