The United States tends to view itself as the gold standard for democracy and bristles at international criticism of its electoral flaws. But recent corrosion of democratic principles, caused mostly by Republicans, has lowered the quality of U.S. democracy, writes ex-CIA analyst Paul R. Pillar.

Before the 2012 election fades in our memories, displaced by sex scandals and other attention-getting news, Americans ought to reflect on what works well and, even more worthy of reflection, what works poorly in their representative democracy.

I’m not talking about post-mortems concerning the specific electoral outcome and what led a particular party or candidate to win or lose. I instead am referring to serious deficiencies that ought to trouble any American, regardless of liking or disliking this month’s election result, who values a healthy and fair political system that respects the will of the people. 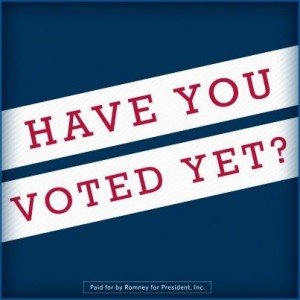 Mitt Romney’s campaign posted this reminder to vote on its Facebook page.

Some of the most undemocratic aspects of what American electoral democracy has become were in display at least as much in this most recent electoral cycle as in any other. One concerns the role of money, in the wake of the Supreme Court’s Citizens United decision and the ineffectiveness of the Federal Election Commission reaching new depths.

Much commentary since the election has noted how little return some of the biggest campaign bankrollers received on their investment. But any single election result does not negate the outsize role that money has assumed in American elections and how much that role runs contrary to the principle that in a democracy elected representatives are supposed to represent people rather than dollars.

The Supreme Court’s reapportionment decisions of the early 1960s established the principle that elected representatives represent people rather than acres or trees. Now dollars have been given back some of the role that was taken away from the acres and the trees.

Then there is the unconscionable inconvenience that many citizens have to endure to exercise their right to vote. Long voter lines even led to a line in Barack Obama’s victory speech. In the decentralized American system of administering elections, the problem is largely due to assorted inefficiency, incompetence and misplaced resources at the state and county level.

The added twist, an even more alarming one, with regard to subversion of democratic principles, this year was the concerted effort by adherents of one party to make voting more difficult, in the belief that those who would be dissuaded or prevented from voting would mostly be supporters of the other party.

The net effect of court actions on this subject was to mitigate this problem by striking down some of the voter suppression efforts. But the efforts were still an outrage; voting is one of the most fundamental rights in a democracy. It also was an outrage that there were not more expressions of outrage, from Republicans, Democrats and independents alike, over the suppression efforts.

Give credit for candor and honesty, however, to the Republican legislative leader in Pennsylvania who spoke openly about how the suppression effort in that state “would allow Governor Romney to win.”

Dissuading the other side’s supporters from voting is not uncommon in political systems in less developed countries, systems that we usually are apt to disparage. Ultimately the difference between the suppression efforts in the United States and, say, what Robert Mugabe’s Zimbabwe African National Union does to its political opponents is more a matter of degree (especially degree of physical brutality) than of kind.

Another undemocratic contrivance, undemocratic because in a democracy voters are supposed to choose their representatives rather than representatives choosing their voters, is gerrymandering. It has become more of a science than an art in recent years thanks to more sophisticated and extensive polling data and computer software that can take advantage of the data.

Both parties practice it when they have a chance. Democrats in Maryland perpetrated one of the most egregious recent examples. But because Republicans have majority control in more state governments than the Democrats do, the net effect nationally has been to help Republicans.

Republicans retained a solid majority of seats in the U.S. House of Representatives this year even though Democratic House candidates won more total votes than Republicans. The natural concentration of Democratic strength in urban areas has something to do with this anomaly, but so does the gerrymandering.

Each of the aforementioned flaws has a self-perpetuating quality, and encourages perpetuation in power of whoever happens to be in power now. State legislators who have a majority set the voting rules and draw the legislative districts (for their own seats, not just for Congress) to increase the chance of their own party retaining control.

The role of big money in the post-Citizens United era increases the chance of electing presidents who appoint the sort of Supreme Court justices who hand down decisions such as Citizens United. And so on.

The self-perpetuation is not as strong and irretrievable as in a non-democratic system such as the one controlled by the Chinese Communist Party. But there are closer parallels with, for example, Iran, which has a freely elected president and parliament but in which self-perpetuation is facilitated by the role of the supreme leader and by interlocking relationships among bodies such as the Guardian Council and the judiciary.

Some of the most worrisome current threats to the health of American democracy come not from matters involving elections specifically but instead from the attitudes and habits of mind, i.e., the political culture, that are at least as important for the health of any democracy as elections.

We saw one such threat when leaders of the party in control of one of the houses of Congress, when they had not won enough political power in the government overall to get their way on budgetary matters, tried to get their way anyhow by threatening to make the nation default on its debt. In other words, they abandoned democracy for extortion.

Another threat was succinctly expressed in a comment from the minority leader of the U.S. Senate that was as candid and as appalling as the comment from the legislative leader in Pennsylvania. He said that his party’s top priority in Congress was for “President Obama to be a one-term president.”

The comment was quite honest, as borne out by his party’s behavior during the subsequent congressional term. Making the toppling of a political opponent more important than anything else, including legislating in the national interest, is just the sort of dysfunctional political culture that tears democracies apart. There are parallels to this overseas, too. Bangladesh comes to mind as a good comparison.

For a democracy to work well and to stay healthy, the political players in it must have respect for the interests of the nation as a whole that overrides preference for any one electoral outcome or hatred for any one political leader. They also need to respect political outcomes that shape policy and not resort to non-democratic threats of harm to the national interest. What we have seen in recent years are disturbing lapses from both those requirements.

One conclusion is that there may not be as wide a gap as generally supposed between democracy in America and democracies elsewhere that Americans may be quick to disdain. A second conclusion is that bearing the first conclusion in mind adds useful perspective in evaluating and responding to political processes in other countries.

The most important conclusion is that American democracy is more fragile, and its health more precarious, than most Americans like to think. Americans ought to be alert to what threatens their democracy from within and to punish, democratically of course, at the polls, those who would undermine it.

4 comments for “Corrupting US Democracy”