Mitt Romney has articulated few substantive differences between himself and President Obama on foreign policy, but a Romney victory could dramatically change the U.S. approach to the world because he, like George W. Bush, is surrounding himself with neocon advisers, notes ex-CIA analyst Paul R. Pillar.

It has become almost a truism that foreign policy will not be a major determinant of the outcome of this year’s presidential election. Foreign policy has played a tiny role in the Republican campaign.

Because it takes two to tangle on any campaign issue, foreign affairs are unlikely to become prominent in the remaining eight weeks of the campaign despite any Democratic efforts to make them so, and despite one of the presidential debates in October being devoted to the subject. 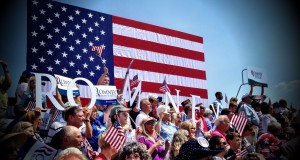 One of the clearest measures of Republican preferences about foreign affairs as far as the campaign is concerned is how remarkably little attention Mitt Romney gave to the topic in his acceptance speech at the Republican convention. What little he did say cannot fairly be described as laying out policy but instead consisted of dispensing a few phrases about such things as throwing allies under buses.

The conventional interpretation of all this is surely correct: that the Romney campaign simply doesn’t see votes to be gained on foreign relations, in the face of what is generally seen as successful foreign policy by the incumbent and a difficulty by the challenger in identifying specific and significant things that he would do differently.

The Romney strategists evidently have concluded that any effort on their part to develop new and more substantive lines of attack on foreign affairs would only detract attention from their laser-like focus on blaming President Obama for everything untoward in the nation’s fiscal and economic affairs.

Daniel Drezner takes the conventional wisdom a step farther by arguing that insofar as Romney has appeared in his rhetoric to distance himself at all from Obama’s foreign policies, acting on that rhetoric would mean going against the current predominant preferences of the American people.

Citing findings in the recently released poll of American opinion on foreign policy conducted by the Chicago Council on Global Affairs, Drezner observes that “most of America, and independents in particular, want pretty much the opposite of” what Romney says he wants regarding increased military spending and more hawkish policies toward Iran, Syria, Russia, China, North Korea and illegal immigration.

Drezner further notes that what is striking in the poll results is “how much the majority view on foreign policy jibes with what the Obama administration has been doing in the world: military retrenchment from the Greater Middle East, a reliance on diplomacy and sanctions to deal with rogue states, a refocusing on East Asia, and prudent cuts in defense spending.”

The Chicago Council’s poll, now conducted biannually, is one of the richest sources of data on American views on world affairs. This year’s survey provides additional food for thought regarding the role of foreign policy in the election by including a section that breaks down responses by self-identified Democrats, Republicans and Independents.

The Council’s own interpretation of results downplays the significance of partisan differences. The report states that “Democrats and Republicans are very similar in their views on foreign policy. Though they differ in proportion, only rarely do they outright disagree.”

That statement, however, understates the importance of the differences that do emerge. The report acknowledges significant differences on immigration and on U.S. foreign policy in the Middle East.

For example, 58 percent of Republicans favor seeking United Nations authorization for a military strike against Iranian nuclear facilities, but only 41 percent of Democrats or Independents do. Without U.N. authorization, all groups oppose a unilateral U.S. strike, but this is markedly more true of Democrats (79 percent) and Independents (73 percent) than Republicans (57 percent).

One can ask this general question: If the challenger is not making foreign policy much of an issue, and if Republicans and Democrats have “very similar views” on most aspects of foreign policy, how much does the outcome of the election really matter as far as foreign policy is concerned? The answer is that it matters a lot, for at least three reasons.

One is that not all issues in foreign relations matter the same, and the few issues on which there is discernible daylight between partisans can turn out to matter a lot. That is certainly true of some of those Middle Eastern issues, with regard to basic questions of war and peace and the potential for getting the United States into big trouble.

A second reason is that leaders shape opinion in addition to being guided by it. One can see some of the effects of this in the partisan patterns reflected in opinion polls. There is no logical, or even demographic or sociological reason, why certain views about, say, health care ought to be correlated with certain views about Iran, but they are.

Many members of the public identify with a particular party and take their cues from leaders of that party as to what they ought to believe regarding foreign-policy issues on which they otherwise know little.

In this sense, leaders of both the governing and opposition parties have bully pulpits, but the most influential bully pulpit is that of the presidency. Especially if a president is most concerned about sustaining the support of his political base, inclinations disproportionately concentrated in the governing party may prevail over naturally arisen sentiments more broadly shared by the American public.

Third, an election determines not only who occupies the Oval Office but also what will be the ideological coloration of an army of political appointees who will have a great deal to say in making foreign policy. It is not always clear before an election who will win the appointment games that get played after an election, but one can at least see the possibilities and probabilities.

In this year’s contest, reelection of the incumbent would leave the overall coloration essentially unchanged, despite individual substitutions likely to occur in some key positions such as secretary of state. Election of the challenger would give a significant opening to neoconservatives who held sway in most of the previous administration, notwithstanding the non-neocons who also would be competing for positions and the presidential ear.

A recent and hugely costly and painful episode that illustrates all of these elements was the Iraq War. The outcome of the 2000 presidential election (and the 9/11 terrorist attack) made the war possible, even though the rhetoric of the 2000 campaign did not make it specifically predictable.

Neocons won enough of the appointment games so that they, in alliance with assertive nationalists in senior positions and an inexperienced president itching to get out from under his father’s foreign-policy shadow, were able to launch their Iraq project.

The mammoth effort to sell the war was so able to shape public opinion that a majority of Americans came to believe that the Iraqi regime and Saddam Hussein were involved in 9/11. The shaping was accomplished not through specific assertions by government officials but by a rhetorical drumbeat that continually linked Iraq and 9/11.

One can find a disturbing similarity in the Chicago Council’s survey results, even though Drezner is pleased to conclude that the poll suggests Americans “have become even more realpolitik” than they were a few years ago.

In one of the poll’s few tests of factual knowledge, respondents were asked what they believe is the current status of Iran’s nuclear program. Only 25 percent got it correct, based on the repeatedly and publicly stated judgment of the U.S. intelligence community: that “Iran is developing some of the technical ability to build nuclear weapons, but has not decided whether to produce them or not.”

With politicians in both parties repeatedly beating the Iranian threat drum, this is another disappointing example of the power of rhetorical drumbeats over the minds even of Americans who have developed some views that otherwise look like realpolitik.

10 comments for “Would Neocons Control Romney?”