Racial, ethnic and religious bigotry is often planted deep within a society, requiring a determined effort to root it out. However, there is inevitably resistance from forces that benefit from the presumed supremacy of one group over another, writes Lawrence Davidson.

The Ku Klux Klan (the name derives from the Greek word Kuklos meaning circle with a modification of the word clan added), an American terrorist organization, was founded in Pulaski, Tennessee, in 1865. It was organized by Southerners who refused to reconcile themselves to the defeat of the Confederacy in the Civil War, and its declared mission was to “maintain the supremacy of the white race in the United States.”

To this end it adopted tactics in the Southern states that would so terrify emancipated African-Americans and their white allies that they would not dare to vote, run for public office, or intermingle with whites except in “racially appropriate” ways. 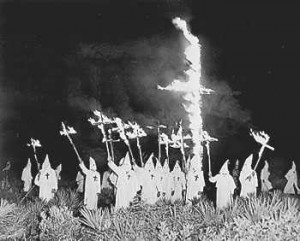 Intimidation took many forms. Non-whites and their allies who sought to assert civil rights were threatened, assaulted and frequently murdered. If they were women, they were subjected to assault and rape. The property of these people was destroyed, their homes and meeting places attacked with bombs or burned. Finally, a favorite tactic was lynching.

Lynching was/is murder carried out by a mob that collectively thinks it is protecting the community and/or its traditions. Between 1882 and 1930, the Klan and allied organizations lynched some 3,000 people, mostly black men. Often the accusation was that the black male victim had sought sexual relations with white women.

It was very rare that those involved in these murders, which were carried out quite openly with little effort to hide identities, were arrested for their actions much less convicted and adequately punished. This, in turn, was possible because of a number of factors:

First and foremost, the belief that African-Americans, and subsequently all non-whites, were dangerous to “white civilization.” This belief was built into the cultural perceptions of the majority. With rare exceptions, a white person could not grow up in this environment without acquiring a knee-jerk prejudice against non-whites.

As a result, local white populations, as well as local law enforcement, often sympathized with the Klan, sometimes feared it, or just did not care about what happened to the non-white population.

In the years following the Civil War, the activities of the Klan only subsided when the U.S. government allowed the Southern states to impose laws that prevented African-Americans from voting and acquiesced in a harsh regime of segregation. When the civil rights movement finally took place in the 1960s, the Klan reappeared and participated in the violent opposition to desegregation and racial equality. This abated only when the federal government started seriously enforcing its own civil rights laws.

While today the Ku Klux Klan as an organization is nearly (but not quite) gone, it would be a mistake to think that the Klan mentality is dead in the U.S. Quite the contrary. The nation’s deep-seated history of racism has helped preserve an apparent permanent subset of Americans who grow up with prejudicial feelings against anyone they perceive as a threat to their version of the “American way of life.”

This background can help us understand the ongoing attacks against American Muslims. Since 2010 there has been an increase in the number of attacks on American Muslims, their mosques and other property, as well as American minorities (such as Sikhs) who are regularly mistaken for Muslims.

These attacks are not the work of a refurbished Ku Klux Klan but, nonetheless, have about them the same nature: fear of American Muslims as cultural subversives (for instance, the delusion that they seek to impose Sharia law in the United States); anonymous threats of violence (via telephone, Internet, and also in the form of abusive graffiti); bomb, arson, and gun-fire attacks on property; and finally assaults and murders.

The Civil Rights Division of the U.S. Justice Department has investigated over 800 such incidents in the last 11 years. Eight such attacks occurred in the first half of the present month of August 2012, including the murder of six Sikhs in Milwaukee on Aug. 5.

An important factor in all of this is the role of a number of campaigning politicians who go around proclaiming the threat that American Muslims supposedly represent to the country. For instance, just prior to a spate of arson attacks in the Chicago area, U.S. Rep. Joe Walsh held townhall meetings in the area where he proclaimed, “One thing I am sure of is that there are people in this country there is a radical strain of Islam in this country it’s not just over there trying to kill Americans every week.”

His talk was filmed and posted on YouTube. Similar rhetoric has been heard from a dozen other politicians including Peter King, the Chairman of the House Homeland Security Committee, and Michele Bachmann, who was among those running for GOP candidate for president.

What It Takes to Break a Bad Habit

This is what you get when you practice a culture that has evolved around racist views. And, you get it more or less in perpetuity. In the case of the United States, the nation spent from 1789 (counting from the establishment of the Constitution which legitimized slavery) to 1954 (the year the Supreme Court declared, in Brown v. Board of Education, mandatory segregation of public schools unconstitutional), or 165 years, building up an “American way of life,” which legitimized discrimination against non-whites.

Subsequently, it has spent from 1957 (counting from the year that Brown v. Board of Education actually began to be enforced) to the present, or 55 years trying to undo that legacy. If it takes about as long to undo a nationwide bad habit as it did to establish it, we have a long road ahead of us.

What the years since 1957 have done is to legally enforce non-racist public behavior. This is certainly a necessary step, which, if consistently applied, would eventually lead to an internalized change in the outlook and morality of most of the population. In this regard Barack Obama’s election as the first African-American president in 2008 was a sure sign of progress.

However, the virulent reaction to Obama by more than a few is another sign that, while 55 years is long enough to alter the public behavior of some people, it is not long enough to change the private attitudes of many. Thus, there are still those groups of citizens who are deeply racist.

Today, under normal circumstances, these racist groups keep their feeling to themselves and their like-minded circle. However, when conditions allow, that racism emerges in a public way, often in hate speech but sometimes more brutally. These extremists are the modern day versions of yesterday’s Klansmen and, given a chance, they will happily commit mayhem in the name of their cherished traditions. American Muslims are now their chief target.

Another Example, Our Ally Israel

If you want to see another example of a society that has historically cultivated discriminatory outlooks and practices, one that American Zionists consider quite similar to the U.S., take a look at Israel. By the way, if there is any truth to the belief that Israel is “just like us,” it can only refer to the United States prior to 1957 prior to the introduction of civil rights laws.

Much like the American South of that pre-legal equality era, Israel is shaped by a culture of ethno/religious exclusiveness practiced amidst a larger out-group (in this case the Palestinian Arabs). This has led the Israeli Jews to teach successive generations that it is proper and necessary to discriminate against Palestinians.

And, sure enough, over the years Israel has produced its own terrorist organizations that intimidate and attack Palestinian Arabs: the Irgun and Lehi during the years leading to the establishment of the state in 1948, Gush Emunim and Terror Against Terror in the 1970s and 1980s, and today’s “Price-Taggers” and West Bank settler vigilantes.

Just like Klansmen in the American South, these terrorists are rarely prosecuted and almost never adequately punished for their crimes because much of the Jewish population as well as the organs of the state sympathize with them. And, just like the American South, they operate in an environment conducive to an Israeli version of lynching.

That brings us to the Israeli- style lynching that occurred on the night of Aug. 17 in Jerusalem. Raised in an environment that purposely cultivates prejudice and hatred against Arabs, a mob of some 50 Israeli Jewish young people attacked four Palestinian male youths, almost killing one of them.

The attack was seemingly unprovoked and apparently random, though the attackers “claimed they wanted to prevent them [the Arab boys] from speaking to Jewish girls.” “Hundreds” witnessed this event but did not interfere. The entire thing was predictable, and indeed inevitable. It is what you get when you practice a culture that has evolved around racist views.

There might be a human genetic inclination toward group solidarity, but its worst manifestations are not inevitable. You can feel solidarity with your family, your religious community, your ethnic group, your nation, etc. without hating others. The hating part is a learned attitude. And, as is often the case, fear will underlie the hatred.

Both American and Israeli bigots or terrorists have focused on Arabs and Muslims as a threatening out-group. Both the Americans and the Israelis who do so draw strength from a culture that has deep racist roots. In today’s U.S.A., many know that this is wrong and so there is a moral position from which to combat this behavior. Unfortunately, it is not possible to say the same thing about Israel.

In the United States the core need is consistent educational and legal pressure against racist behavior both in terms of individual and institutional behavior. When I say consistent I mean over multiple generations, for at least as many years as it took to create the nationwide bigotry in the first place.

If we do not succeed in this endeavor then American Zionists will be proven correct. We in the U.S. will be just like the Israelis.

6 comments for “Training Societies to be Bigoted”