Egypt’s moderate Islamist president, Mohamed Morsi, is picking his way through hot political coals as a new governing system rises from the embers of the old. But his ad hoc constitutionalism is not unprecedented; indeed, it is how the United States was forged, notes ex-CIA analyst Paul R. Pillar.

Much we still do not know about the background to the ouster of senior figures in the Egyptian military. Specifically, it is unclear to what extent President Mohamed Morsi enjoyed the approval or even the active cooperation of elements within the military.

We know there has been discontent within the military ranks about the performance of the top brass, entirely apart from any larger political issues about the distribution of power. The recent incident at a border post in the Sinai, in which Egyptian soldiers were killed and military leaders were widely criticized for letting security deteriorate in that corner of the country, was a ready-made occasion for shaking up the top ranks. 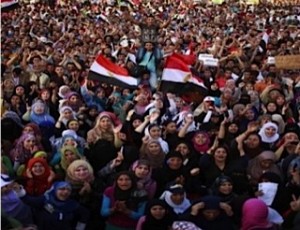 A pro-democracy protest in Egypt.

Whatever cards Morsi had been dealt, he evidently played them skillfully in making the changes in the military leadership positions as well as reclaiming for his office some powers that the Supreme Council of the Armed Forces (SCAF) had earlier claimed for itself. Beyond that, we are largely in the dark.

Even if we had a more complete picture of these events, it would be impossible to predict where this political drama leads or what the next chapter in Egypt’s still-turbulent story will look like. The perceptions and emotions of the Egyptian public, not just the bilateral interchange between the president and the generals, will have a lot to do with this.

In trying to interpret the drama and its larger significance, it does not help simply to mark a scorecard in which political Islamists including Morsi are regarded as the bad guys and to observe that in this instance the bad guys unfortunately seem to have scored some points.

Nor is it helpful, starting with the same automatic aversion to anything Islamist, to try to analyze the political interplay in terms of formal but temporary constitutional powers by noting that Morsi had no constitutional authority to snatch certain powers back from the SCAF. Of course he didn’t, and neither did the SCAF have any such authority to snatch them in the first place.

In Egypt today there is a bizarre coexistence between, on one hand, legal structures which sound familiar to us such as constitutions and courts, along with much discussion about legality or illegality within that framework, and on the other hand a dynamic of power and legitimacy that does not stay within that framework and plays out in large part outside it.

We have seen something similar for years in Pakistan, where dark-suited lawyers have been prominent demonstrators in the streets and where the rulings of a constitutional court get lots of attention amid glaring extra-constitutional actions such as military coups.

Marc Lynch has appropriately likened the political story that has been unfolding in Egypt over the past two years to Calvinball, a game played by a comic strip character who made up the rules as he went along.

Even constitutional structures that we are accustomed to thinking of as firmly standing on bedrock may ultimately depend on people having made up some rules as they went along. Consider, for example, the U.S. Constitution. We regard it as the foundation on which our political order rests, but what is the ultimate chain of authority on which the constitution itself rests?

Following backwards the nearest thing we have to such a chain takes us to a concern in the first couple of years after the Revolutionary War among some Virginians, including most notably George Washington and James Madison, about the inability of existing political structures to foster commerce that affects more than one state.

The Virginians reached some agreements with counterparts in Maryland regarding commerce in their part of the new nation, but they realized the geographic scope would need to be wider. So the Virginia General Assembly passed a resolution in 1786 proposing a meeting of commissioners from all of the states “to consider how far a uniform system in their commercial regulations may be necessary to their common interest and their permanent harmony.”

That led to the Annapolis Convention in September of the same year. Only five states, not even a majority, were represented at Annapolis.

Despite (and in another sense, because of) that meager representation, the Annapolis commissioners did not make any substantive constitutional recommendations but called for another convention to meet the following May in Philadelphia and to consider not just the regulation of commerce but any “further provisions” needed “to render the constitution of the Federal Government adequate to the exigencies of the Union.”

In trying to justify this expansion from their original mandate, the Annapolis conferees pointedly noted that New Jersey had instructed its representatives to consider not just commercial regulations but also “other important matters.” Even with that effort at a justification, the men at Annapolis knew they were stretching things in making their recommendation, as far as their formal authority was concerned. In their concluding report they wrote:

“If in expressing this wish, or in intimating any other sentiment, your Commissioners should seem to exceed the strict bounds of their appointment, they entertain a full confidence that a conduct dictated by an anxiety for the welfare of the United States will not fail to receive an indulgent construction.”

The tenuousness of the chain of authority leading to the U.S. Constitution did not end there. The Constitutional Convention in Philadelphia was supposed to propose revisions to the Articles of Confederation, which by their own terms could be amended only with the unanimous agreement of the states.

The Virginia resolution and the report of the Annapolis Convention both explicitly mentioned unanimous approval as needed for any new arrangements. The writers of the new constitution nonetheless decided on their own that approval of only nine states would be necessary for their work to take effect.

The American constitutional experiment took root not because the new distribution of powers grew out of some previously established authorizing framework. It took root partly because of sheer necessity. It succeeded also because of a political culture bequeathed by the British whose rule had so recently been shaken off.

The Founding Fathers were making up rules as they went along, but those rules and their implementation were based on something even more fundamental: habits of tolerance, accommodation and representation that were part of an Anglo-American culture that already was well established.

The makers of the new Egypt will necessarily be making up rules on the fly as well. What legitimacy the rule-making will have will be based on whatever ad hoc legitimizing mechanisms become available, such as the presidential election that Morsi won.

Whether Egypt achieves in the years ahead reasonable stability and something approaching democracy will not depend primarily on whether the president or the SCAF or anyone else has acted according to the letter of an interim constitution, which is Egypt’s equivalent of the Articles of Confederation. Nor will it depend on whether a member of the Muslim Brotherhood holds high office.

It will depend largely on whether Egyptians can forge from foreign examples, colonial residue and their own accelerated political development the sort of habits and attitudes that make stability and democracy possible.

← Atomized America of Late Capitalism
Would US Intervention Help Syria? →