As Iran becomes a political football in Campaign 2012 with President Obama and Mitt Romney competing to kick it the hardest and farthest there is talk about Iran’s failure to meet its “international obligations” but little thought about what that means, notes Danny Schechter.

What are “international obligations”? Does the United States have to uphold them along with other counties? Does Washington even know they are defined as “obligations owed by states to the international community as a whole, intended to protect and promote the basic values and common interests of all.” By this definition, no one state can decide what’s best for all.

When the United States stepped up its sanctions on Iran last past week, it cited Iran’s failure to adhere to its “international obligations.” There was, of course, no reference to domestic politics where President Barack Obama is under attack from Republican adversary Mitt Romney for what Romney considers Obama’s failure to stop Iran’s nuclear program. 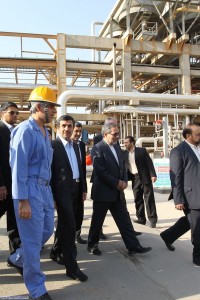 Romney leveled the criticism in Israel hoping to curry favor and donations from Jewish voters. Scholars like Juan Cole found the exercise distasteful for many reasons: “There is a convention in US politics that you don’t criticize the sitting president, even if you are an opposition politician, while on foreign soil. Romney clearly intends to slam President Obama while in Israel.

“It is distasteful that Romney is clearly holding the event in some large part to please casino mogul Sheldon Adelson, who first bankrolled Newt Gingrich and now is talking about giving $100 million to elect Romney. Adelson is a huge supporter of far rightwing Likud Party Prime Minister Binyamin Netanyahu, and published a free newspaper in Israel to support all things Bibi all the time.

“Adelson is under investigation for allegedly bribing Chinese officials in Macau in reference to his casino empire there. Since Adelson is potentially an agent of Chinese influence and is a partisan of one of Israel’s most rightwing parties, Romney’s indebtedness to him is disturbing. It is distasteful to have Israeli Prime Minister Binyamin Netanyahu interfering in an American domestic election by openly favoring Romney over Obama.”

Distasteful or not, Obama’s response was to show he can be unilaterally tougher on Iran by strengthening sanctions by executive order,  based on Iran’s alleged failure to uphold its “international obligations.”

Ben Rhodes, a deputy national security adviser at the White House, said: “Where we certainly agree with Prime Minister Netanyahu is on the fundamental question that we have not yet seen the Iranian government make a decision to come in line with their international obligations. So we share very much the assessment of the Israeli government and Prime Minister Netanyahu that the purpose of the sanctions is to change the calculus of the Iranian government with respect to their nuclear program.”

“And until they make that decision, we need to continue to increase the pressure,” Rhodes said.

Okay, how do you decode this not so diplomatic language? What is Washington really saying and on what basis? It is saying or claiming or suggesting — while not proving — that Iran is in violation of the Non-Proliferation Treaty, a treaty that, unmentioned, Israel refuses to sign and has not adhered to (in building its own nuclear arsenal).

With the White House, in full campaign mode, and lambasting Iran to deter more political attacks by Romney and to further placate Israel, the authoritative Congressional Research Service is on record as recently as June 26 in a report on this very issue titled, “Iran’s Nuclear Program: Tehran’s Compliance with International Obligations,” that Iran may not be in violation at all.

Concludes Paul K. Kerr, their analyst in nonproliferation: “Whether Iran has violated the NPT is unclear. The treaty does not contain a mechanism for determining that a state-party has violated its obligations. Moreover, there does not appear to be a formal procedure for determining such violations. An NPT Review Conference would, however, be one venue for NPT states-parties to make such a determination.

“The U.N. Security Council has never declared Iran to be in violation of the NPT; neither the council nor the U.N. General Assembly has a responsibility to adjudicate treaty violations.”

This all gets more bizarre because just as one branch of the U.S. government implicitly questions the conclusions of another branch, the same thing is happening in the military command in Israel.

Read this: “IDF chief Benny Gantz has further confirmed the outright reluctance of the Israeli military to attack Iran, a position that goes directly counter to that of Prime Minister Bibi Netanyahu and Defense Minister Ehud Barak.  Channel 10â€²s Immanuel Rosen reported about an allegedly off the record conversation in which Gantz said that the Israeli home front was not prepared for the Iranian response to an Israeli attack. He added that such a military strike would have a ‘limited effect’ on Iran.”

At the same time, posturing and preparations for an attack continue. The Atlantic Magazine says there is now a 38 percent chance of an attack. Others in Israel are still being belligerent. In response, Iran’s President Mahmoud Ahmadinejad has repeated his verbal criticisms of Zionism. (These are invariably conflated in some western media and pro-Israeli propaganda outlets as evidence of an imminent militarily threat of extermination.)

So which side of this issue does President Obama come down on? What facts does he select to support his actions? He chooses those that enhance his tough-guy credentials for political reasons. In fact, facts have mostly nothing to do with the war or words. It’s all about politics and perception, or whatever his campaign believes will be most helpful this week.

“International obligations” are what they say they are. There’s nothing international about that.

Meanwhile. Iran is continuing with talks, as PressTV reports: “A senior Iranian official says the Islamic Republic and the six major world powers (P5+1) will proceed with their multifaceted talks to eventually achieve ‘positive and constructive’ results.”

Al Jazeera reports that Iranian-American author Hooman Majid says sanctions are “turning into a form of collective punishment” against people in Iran. He blames some U.S. media outlets, more than the Administration, as pushing for war:  “The administration is not trying to prepare the public for war and is not manipulating the media, which is actually the ironic thing because in some ways they’re trying to step back a bit. It’s the media this time that has just jumped on this idea that we’re going to go to war.

“And I certainly think there’s an influence from the Israeli media and the Israeli propaganda machine, which is very powerful and permeates the American media all the time. I think there is a concerted effort on (their) part to prepare people, particularly Americans, that it’s a righteous war.”

← The Ongoing Danger from Fukushima
More US Soldiers Die in Vain →

6 comments for “Iran as Political Football”