I seldom feel much sympathy for those who claim to be offended by someone else’s politically inspired remark. Remarks, however, that not only are offensive but also reveal a profound misunderstanding of an important situation or a destructive approach toward dealing with that situation, or both, should not be allowed to pass unnoticed.

In an exclusive big-money fund-raiser in Jerusalem on Monday, Mitt Romney presented a discourseon why Israel is more prosperous than the Palestinian territories. He couched this subject as an intellectual debate between the scholars Jared Diamond, who explains differences in economic success in terms of geography and natural resources, and David Landes, who explains such differences in terms of culture. 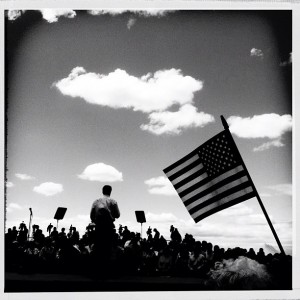 It’s culture, said Romney. “I recognize the power,” he said, “of at least culture and a few other things.” The only “other thing” he mentioned was “the hand of providence,” which preceded a further discourse about Israel as a “promised land” in which Israelis, relying on “themselves and the arm of God,” recognize “the purpose in this place.”

That suppression has included in the Gaza Strip a suffocating blockade and in the West Bank (the explicit subject of Romney’s comparison) a less all-encompassing but still pervasive system of restricting transportation, separating people’s homes from their livelihoods, denying access to natural markets, requiring and denying permission for the simplest transactions, and countless additional ways of turning into a struggle the daily task of earning a living.

A recent World Bank report on the Palestinian economy stated, “The major constraints to private sector activity are the tight Israeli restrictions, and growth will not be sustainable until Palestinians have access to resources and are allowed to move freely.”

We should not be surprised anymore that Romney, in his effort to win whatever votes he thinks he can win by posing as the most unquestioning and uncompromising lover of Israel in the presidential race, should offer such an absurdly biased and truncated picture of economic realities on the ground.

On this trip he has spoken of his “passion” for Israel, thereby sticking a finger in the eye of George Washington, who in one of the sagest pieces of advice he offered in his farewell address warned that “a passionate attachment of one nation for another produces a variety of evils,” with some of the evils he enumerated being a remarkably prescient description of what we see today in U.S. relations and standing in the Middle East.

As for not only Palestinian economic activity but also Palestinian political and civil rights and national aspirations, Romney has effectively photoshopped them out of the pictures he has provided, including in a major address and interview before his current trip. And although he said he wasn’t going to try to make new foreign policy while on this trip, he did so by declaring Jerusalem to be the capital of Israel, even though the United States and nearly every other country in the world does not recognize it as such but instead considers it disputed territory.

Palestinian reaction to Romney’s latest comment was understandable. Senior Palestinian official Saeb Erekat said, “It is a racist statement and this man doesn’t realize that the Palestinian economy cannot reach its potential because there is an Israeli occupation. It seems to me this man lacks information, knowledge, vision and understanding of this region and its people.”

But the significance of Romney’s discourse goes beyond its offensiveness, racist or not, and its implications for any chance that as president he could be respected as an honest broker in dealing with the Israeli-Palestinian conflict. It indicates a failure, deliberate or not, to recognize a significant moral, legal and humanitarian issue that festers almost within earshot of where he was speaking.

Romney’s campaign claimed that negative reaction to his comments involved taking them out of context; the campaign noted that he made comparisons not only between Israel and the West Bank but also between the United States and Mexico and between Chile and Ecuador. That he did.

It is interesting that the differences in economic status in those other comparisons are of a similar order of magnitude as the approximately 2:1 ratio that Romney asserted was the case with Israel and the West Bank. As some observers promptly noted, Romney was way off in his figures. The World Bank estimates that GDP per capita in the Palestinian territories is about $1,500, not the $10,000 that Romney gave, and the relative difference with Israel is not 2:1 but more than 10:1.

We are not dealing here with one more indiscretion that is counted as a candidate’s gaffe, like that silly business about the Olympics in Britain. It is instead the indication of a fundamentally wrong-headed and destructive approach to a long-running conflict that is very bad for the Palestinians, bad for any hope for peace in the Middle East, for that reason also bad for Israel, and for all of those reasons and the consequences that flow from them, bad for the United States.